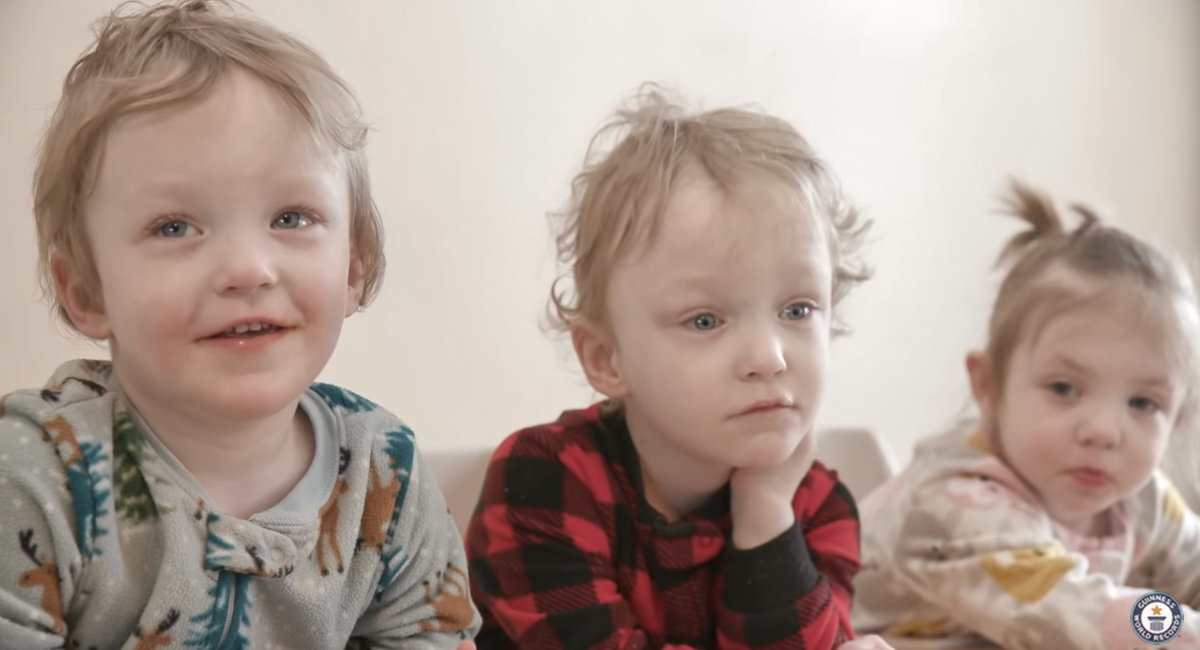 Kaylie and Brandon DeShane of Norwood, New York, are the proud parents of triplets who have not only beaten the odds, but they’ve also set a Guinness World Record. Cian, Declan, and Rowan DeShane have been awarded the title of longest interval between births of triplets.

Most triplets share the same birthday, but these remarkable siblings were not only born on different days and years, but in different decades.

After hoping to become pregnant for four years, doctors suggested that the DeShanes try in vitro fertilization (IVF) due to infertility issues caused by Polycystic Ovary Syndrome, or PCOS. IVF comes with numerous risks, to both mothers and babies. At her six-week ultrasound, Kaylie was told both of the embryos had implanted, and one embryo had split, which meant she was not only carrying one baby, but also a set of identical twins, all at the same time. Kaylie cried because she said “the IVF clinic told us we couldn’t carry three.” The babies’ due date was April 26, 2020.

At 22 weeks five days gestation, the triplets began making a very early appearance when Kaylie’s water broke. Cian was already in the birth canal with an undetectable heart rate, so Kaylie was rushed to the operating room. Many hospitals do not attempt to save the life of a baby as young as 22 weeks, but when the DeShanes were asked if they wanted doctors to resuscitate if needed, they said, “Everything you can do, do all of it!”

In a successful emergency procedure, Cian was born on December 28, 2019, and the doctors gave him a mere 9% chance of survival. His heart rate at birth was just 30 beats per minute. In order to buy more time for Cain’s siblings, Kaylie remained in labor for five-and-a-half more days, having consistent contractions and being fully dilated. A high-fever due to an infection led doctors to deliver Cian’s identical brother and their sister at 23 weeks.

Kaylie gave birth to Declan and Rowan on January 2, 2020. Declan weighed 1 pound, 7.6 ounces, and Rowan weighed the least of all three babies at only 1 pound, 1 ounce. The babies were born five days, 12 hours, and 34 minutes after their brother, Cian. The new parents were told it was very unlikely that all three babies would survive.

However, after 122 days in the NICU, the DeShane triplets were all able to join their family at home. Kaylie began to wonder if their story could be one for the records. And sure enough, it was!

The record for longest interval between birth of triplets was last broken in 1956 by Calvin, Catherine, and Christine Jamison, who were born 66 hours and 50 minutes apart.

Kaylie applied for the Guinness World Records title of longest interval between births of triplets and the record was confirmed on January 13, 2021. In response to breaking the 60-year-old record, Kaylie said, “I’m proud of them. They fought and survived. They have scars all over from all the needles and they are the warriors, not me. I wanted a record for them. I wanted them know later what they went through.”