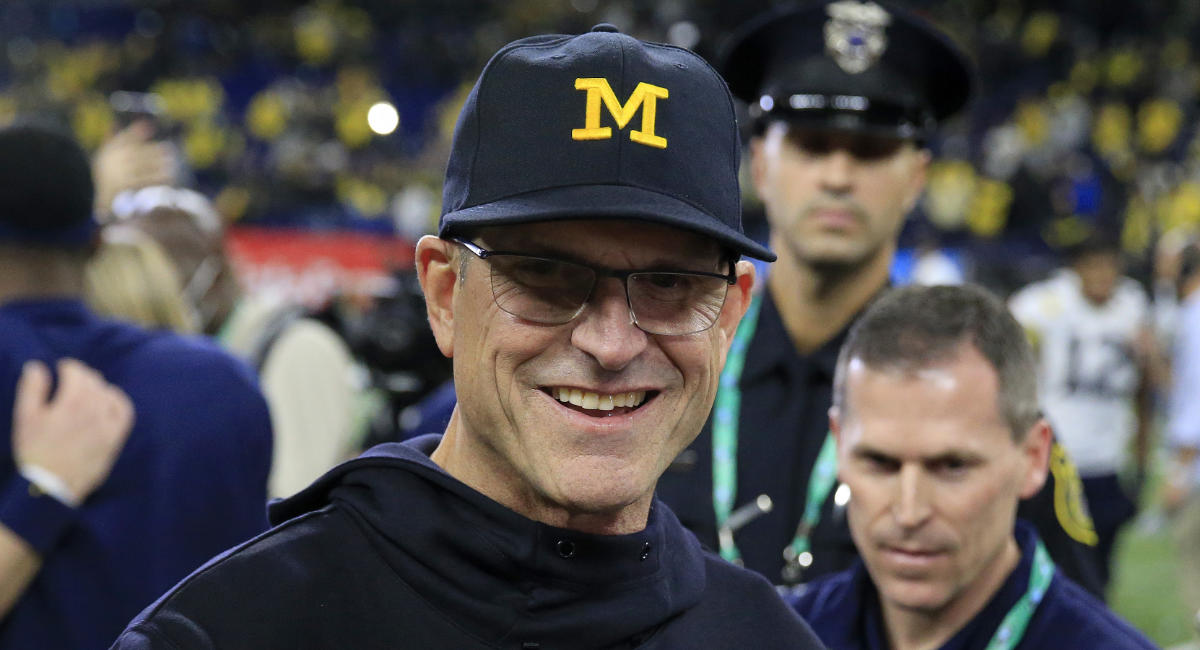 Michigan Wolverines head football coach Jim Harbaugh has not been shy about his pro-life convictions in the past. On July 17, he again spoke out in favor of life at the Plymouth Right to Life dinner and fundraiser auction in Michigan. He urged pro-lifers and society to have courage to protect babies from abortion. He was joined by his wife Sarah and Michigan linebackers coach George Helow.

“I believe in having the courage to let the unborn be born,” Harbaugh told the sold-out audience, according to Detroit Catholic. “I love life. I believe in having a loving care and respect for life and death. My faith and my science are what drive these beliefs in me. Quoting from Jeremiah, ‘Before I formed you in the womb, I knew you. Before you were born, I set you apart. I appointed you as a prophet to the nations.'”

He credits his parents with instilling his pro-life values from a young age and said those values have influenced his life as a father and as a coach. He noted that speaking against abortion can feel tough these days. Following the overturning of Roe v. Wade in June, the Michigan voters will now decide whether abortion will be enshrined in the state constitution.

“Passions can make the process messy, but when combined with respect, it ultimately produces the best outcomes,” said Harbaugh. “This process has been passionate and messy, but I have faith in the American people to ultimately develop the right policies and laws for all lives involved. I recognize one’s personal thinking regarding morality of a particular action may differ from their thinking on whether government should make that action illegal. There are many things one may hold to be immoral, but the government appropriately allows because of some greater good or personal or constitutional right.”

READ: Celebrities born in difficult circumstances thankful for the gift of life

However, he added, “Ultimately, I don’t believe that is the case with abortion. Yes, there are conflicts between the legitimate rights of the mother and the rights of the unborn child. One resolution might involve incredible hardship for the mother, family and society. Another results in the death of an unborn person.”

He called preborn babies “amazing gifts from God” and noted that in God’s plan, “each unborn human truly has a future filled with potential, talent, dreams, and love.”

He added, “To me, the right choice is to have the courage to let the unborn be born.”

The event raised more than $140,000 for pro-life initiatives in the area. Auctioned items included Michigan football memorabilia, resorts, and the chance to catch a cross-ballroom spiral from Harbaugh.

During a Q&A session, Fr. John Riccardo, another speaker at the event, asked the Harbaughs if they are concerned about being “canceled” because of their pro-life activism. Sarah said they are aware that their pro-life stance might effect job prestige but said they are involved in pro-life efforts “for the right reasons.”

Harbaugh explained, “During halftime of a game, talking with the players, I say they are here because they have chosen to be here. If someone believes in what they stand for, they are choosing to stand for that position, and what kind of person are you if you don’t fight tooth and nail for what you stand for? You get to change hearts by fighting for what you stand for.”

This isn’t the first time Harbaugh has been vocal about being against abortion. In 2020, during a podcast interview with the National Review, he said, “Even now, as we all go through what we’re going through with COVID-19, I see people more concerned about others. More prayerful. As I said, God has virtually stopped the world from spinning. I don’t think it’s coincidence — my personal feeling, living a faith-based life, this is a message or this is something that should be a time where we grow on our faith for reverence and respect for God.”

He continued, “You see people taking more of a view of sanctity of life. And I hope that can continue. I hope that continues and not just in this time of crisis or pandemic,” adding, “And lastly, abortion. We talk about sanctity of life, yet we live in a society that aborts babies. There can’t be anything more horrendous.”