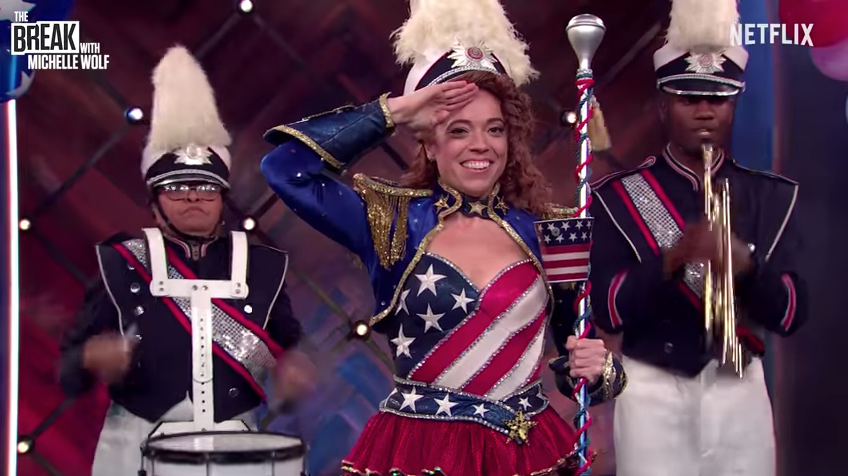 Abortion advocates are not handling the news of Justice Anthony Kennedy’s retirement well. The knowledge that Roe v. Wade might possibly be overturned with the appointment of another pro-life justice has sent them into near hysterics — yet along the way, they are inadvertently showing many of the fundamental problems with supporting abortion.

On her Netflix show “The Break,” comedienne Michelle Wolf discussed Justice Kennedy’s retirement, focusing solely on what it may mean for the continued legalization of abortion, in a segment titled “Salute to Abortions.”

Wolf should stick to comedy instead of attempting to explain anything having to do with life or science. Here are four truths she missed.

1. Abortion doesn’t “stop a baby from happening.” It kills a living human being.

“Look, access to abortion is good and important,” she said. “Some people say abortion is ‘killing a baby.’ It’s not. It’s stopping a baby from happening. It’s like Back to the Future and abortion is the DeLorean.”

This, of course, is false; science has proven that a preborn child is not a “potential” human; the humanity of the preborn is not up for debate. From the moment of fertilization, the baby has his or her own unique DNA, separate from the mother. Research shows that within just 16 days, the baby’s heart begins beating. Just a few weeks later, brain waves can be measured. By the end of the first trimester, most of the baby’s major organs have formed.

This isn’t almost a baby, or a potential person. The preborn child is a human being. This isn’t a matter of belief, but of scientific fact, and that abortion advocates continue to deny it shows how willing they are to turn their backs on science if it doesn’t fit their ideology.

2. Being “pro-life” means being in favor of allowing human beings in the womb to live.

Wolf also argued that pro-lifers are not truly pro-life, but instead are “anti-abortion.” While many pro-lifers would not dispute that term and frequently embrace it, Wolf argues that the difference between the two is that people who are truly pro-life would also be “fighting hard for health care, child care, education, gun control and protecting the environment.”

Abortion fans tend to twist the term “pro-life” into meaning whatever they want it to mean at any given time. ‘You aren’t pro-life unless you are for (fill in the blank)’ is commonly heard. But in no other movement do you have people suggesting that opposing the killing of other human beings isn’t enough. “You’re against domestic abuse? Then you’d better be willing to feed and house all the women who are being beaten by their partners!”

Pro-lifers — like those who were in favor of abolishing slavery — shouldn’t have to solve all of possible ramifications of ending a human injustice before that injustice is treated as such.

Wolf also ignores the wide spectrum of views among pro-lifers; One-third of Democrats, for example — who often support universal healthcare or state-funded child care — are also pro-life. Supporting liberal policies does not preclude one from opposing abortion, yet Wolf seems to think this is a rarity among pro-lifers.

3. Women don’t create life on their own.

I’m sure this brings up a lot of feelings and thoughts and points you want to make, and I just want you to know that’s all very irrelevant. Abortion is a woman’s right. And I know acknowledging that is hard for some of you, because that would mean you’d also have to acknowledge that women are naturally equipped to do the most powerful thing in the world: give life. While you guys are naturally equipped to do what? Lift suitcases into the overhead compartment?

She added, “If women embrace the fact that they control life, that makes it a lot harder for men to control women. Of course men are uncomfortable with that. They won’t even let us control a little bit of Star Wars.”

Again, Wolf ignores science. Women give birth, which is a powerful and amazing thing. But they do not control life, or give life on their own. Fertilization requires a man’s participation. Women and men create life together, and it’s a sad statement on the strength of her views that she has to demean an entire class of people — men — in order to argue them.

4. The legality and availability of abortion hasn’t helped women.

In addition to trashing men as uniformly useless and misogynist, she argued that abortion should be common. “Abortion shouldn’t be a luxury,” she said. “It shouldn’t be the new, ‘I summer in Montauk.’ It should be on the dollar menu at McDonald’s!” She concluded by saying, “Women, don’t forget: you have the power to give life! And men will try to control that. Don’t let them! God bless abortions and God bless America!”

But the choice to advance abortion comes at the expense of women — something the founding feminists understood. They didn’t want women to have to choose between their children and their education, careers, or futures. They wanted more support, better resources, a family-friendly culture — barriers against coercing women into abortions. Legalizing abortion addressed none of these issues; it allowed them to flourish. Women still have difficulties attending school or building careers while pregnant or parenting, in part because the cultural mindset is that there’s no need to give women better support, because abortion is available.

Abortion is misogynistic, misandrist, and denies the scientific reality of prenatal development. It’s no wonder pro-abortion extremists like Wolf have to resort to tired, desperate, inaccurate arguments; without them, how could she get anyone to agree?