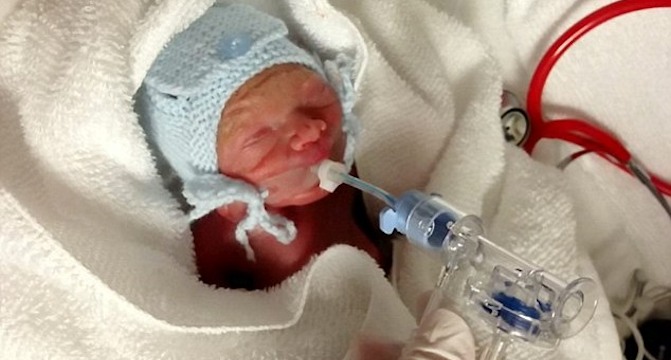 Before you meet these three beautiful babies, there are three notable things they have in common:

1) They could have been aborted.

Every one of these babies could have been aborted, somewhere in America. There are clinics that specialize in aborting babies just like these ones. Thankfully, each of these babies had parents who saw their value and fought for their lives, instead of willfully destroying them.

2) They would have felt terrible pain.

While science shows that unborn babies may feel pain as early as their fifth week, it almost undeniably proves that these babies — all over the age of 20 weeks — can feel pain, excruciatingly so.

[There is] solid medical evidence to believe that the [unborn] child not only feels pain, but feels it more severely than an infant or an adult… [T]his is because this is a “uniquely vulnerable time, since the pain system is fully established, yet the higher level pain-modifying system has barely begun to develop,” according to Dr. Paul Ranalli, a neurologist from the University of Toronto.

3) Abortionists refer to them as pieces of meat.

Abortionists use vulgar, inhuman terms when they talk about babies. Late-term abortionist LeRoy Carhart (who told Live Action that he has done “twenty-some-thousand” abortions “over 24 weeks”) jokingly refers to them as “meat in a Crock-Pot.” And he talks about breaking their bodies to pieces with “a pickaxe, a drill bit.” Carhart’s just one of many. Little Jett weighed only 1.4 pounds when he was born at 25 weeks. His mother’s water had broken five weeks earlier, and she had been told that she needed to decide whether or not to have an abortion. She was given five minutes to make her decision. Medical staff was pressuring her to abort Jett.

Thankfully, Jett’s mother, Mhairi, refused. Along with her husband, Paul, she didn’t waver, even under extreme pressure. Mhairi said that “doctors didn’t even give Jett a chance” and that, when she said she didn’t want an abortion (even after nearly being wheeled into the room), “the doctor looked at his watch and rolled his eyes at me.”

Jett has gone on to prove the doctors wrong and his parents more than right. Not only did he live, but he’s living quite well these days at his home in the U.K. His mother hopes the family’s story will inspire other moms to find out true information for themselves, even when pressured to abort by doctors:

“We have a happy outcome but I worry that other mothers could have had an abortion when their babies might have survived.” …

[S]he was forced to Google her options rather than being given them by medics – and now hopes her story will be seen by other pregnant women doing the same thing. Tiny Maddalena was born at 23 weeks, unbelievably small at a mere 382 grams. And yet, thanks to a pair of scissors on her scale, doctors thought her weight exceeded one pound and fought to save her life. They didn’t realize her true weight until she had already been put on a ventilator, and at that point, they — and she — continued to fight for her life.

Maddalena’s twin sister, Isabella, sadly died after their early birth. But Maddalena continues to grow healthy and strong, and her parents consider her their “little miracle.” Macie has a unique story. At 23 weeks in utero, doctors discovered a grapefruit-size tumor growing on her. Without intervention, she was predicted to die.

At 25 weeks, surgeons from Texas Children’s Fetal Center operated on Macie, leaving just her head and upper body inside her mother’s womb as they operated, removing the growth.

Macie stayed safe inside for another amazing ten weeks, finally being “born again” at 35 weeks. Today, she has a scar, but that’s about it; she is reported to be “perfectly healthy.” A scan of Macie and her tumor.

If God had not brought us to Texas Children’s, our little girl would not be here…I am grateful that Texas Children’s is building a place like the Maternity Center, but really what they are building is life for more babies like Macie.

America needs to reject abortion – for babies of all ages – and celebrate the beauty of even the tiniest lives.