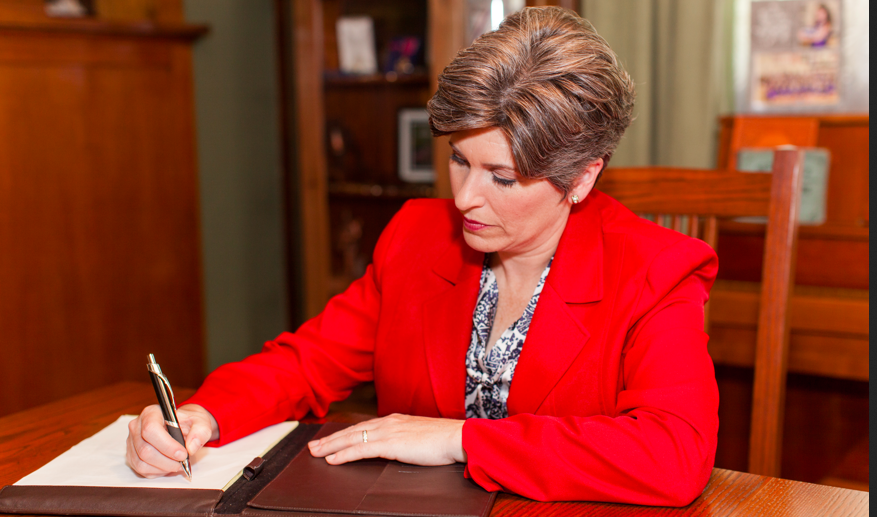 For the first time in U.S. history, there will be 21 pro-life women in Congress. With the 2014 election of Joni Ernst (R-IA) in the Senate and Elise Stefanik (R-NY), Mia Love (R-UT), Barbara Comstock (R-VA), and Mimi Walters (R-CA) in the House, an additional five women will join their 16 colleagues in the hopeful passage of federal pro-life legislation.

Famous for her much-discussed campaign commercial on hog farming, Ernst – the first woman elected to the Senate from Iowa – soared to victory even while affirming her support for pro-life personhood legislation. She grew up in small-town America, and still lives there today:

My mom made all of my clothes. We went to church every week, helped our neighbors when they needed it, and they did the same for us.  … Today I teach Sunday school in the same church I was baptized and married in. I live in the very house where one of my best friends grew up.

Ernst is married to a retired Army Ranger and, as a member of the Iowa Army National Guard, she personally served in Iraq and Kuwait.

On the life issue, Ernst couldn’t make herself clearer:

[She] believes life begins at conception, that all innocent life is precious, and that we must cherish and protect the unborn.

Stefanik made history – not only in helping bring a record number of pro-life women to Congress – but also in becoming the youngest woman ever elected to the U.S. House. At the age of 30, she routed the New York Democrat incumbent to win her seat. Stefanik is enjoying a rising career in politics that began in sixth grade, where she campaigned on a promise to bring a snack machine to her school. She was the first in her family to finish college.

Already, she’s been elected to a leadership position in the House: “to serve as a liaison between the new freshmen class of representatives and the House Policy Committee.”

Her energy, experience, and passion for promoting the dignity of each human life will make Elise an excellent addition to the House Pro-life Women’s Caucus.

Love adds her own unique piece of history to the 114th Congress as the first Black Republican woman ever elected to Congress. Born to Haitian parents, Love’s American birth helped her parents immigrate here. She shares:

“My parents have always told me I was a miracle and our family’s ticket to America.”

And yet, despite Love’s unique life circumstances, an image put out by her campaign gave the true reason she was elected:

I wasn’t elected because of the color of my skin.

I wasn’t elected because of my gender.

I was elected because of the solutions I put on the table.

On her campaign site, Love declared (with an exclamation mark): “I AM PRO-LIFE!” She continued:

I am proud to say that I am pro-life. My commitment to pro-life policies is unwavering, and I look forward to working with others in Congress to protect the right to life. I have received endorsements from multiple pro-life organizations, including the National Right to Life Committee (NRLC), the nation’s oldest and largest pro-life organization.

An attorney and a mother, Comstock had her two sons while attending law school, and she gave birth to her daughter not long after graduation.

Over a decade before her election to the House, Comstock served as Chief Counsel on a House committee, and then, in the U.S. Department of Justice:

She then was recruited to serve on the House Government Reform and Oversight Committee, the largest House committee where she became Chief Counsel and led hearings and oversight of investigations into waste, fraud and abuse. Barbara also served as Director of the Office of Public Affairs for the U.S. Department of Justice from 2002 through 2003. …

In 2001 the Washington Post noted: “Republicans rave about her effectiveness, but what is striking is that in this time of bitter political partisanship, even some Democrats privately acknowledge the even-keeled Comstock does her work with care.”

Comstock takes her pro-life values seriously, serving on boards to help children suffering from abuse as well as disabled children. In addition, she founded a new leadership program for young women in 2013.

However, Comstock may need some encouragement from her constituents to keep a solidly pro-life stance in office. Her actions have been mixed: while she’s voted in favor of a personhood bill, she’s also voted against a pro-life amendment to Virginia’s implementation of ObamaCare and come out in support of over-the-counter birth control. Walters has a background in finance and business, and is a mother of four. She has also actively worked to reduce gang violence in California, as she “currently serves as a Board Member of the Orange County Gang Reduction Intervention Program (G.R.I.P.) which partners with local law enforcement agencies to implement targeted gang prevention strategies to at risk youth, families and communities.” Walters is also “a founder of the California Women’s Leadership Association.”

Mimi has worked tirelessly at the state level to defend women and the unborn. Her experience and passion for protecting life will make her a strong addition to the House Pro-life Women’s Caucus. As a wife, mother, business owner, and longtime public servant, Mimi has spent years building up women in leadership roles. She is a trailblazer in the mold of Susan B. Anthony herself and exactly the type of candidate we exist to support.

Walters proves, through her dedicated work and experience, that women can stand for women and their children at the same time.