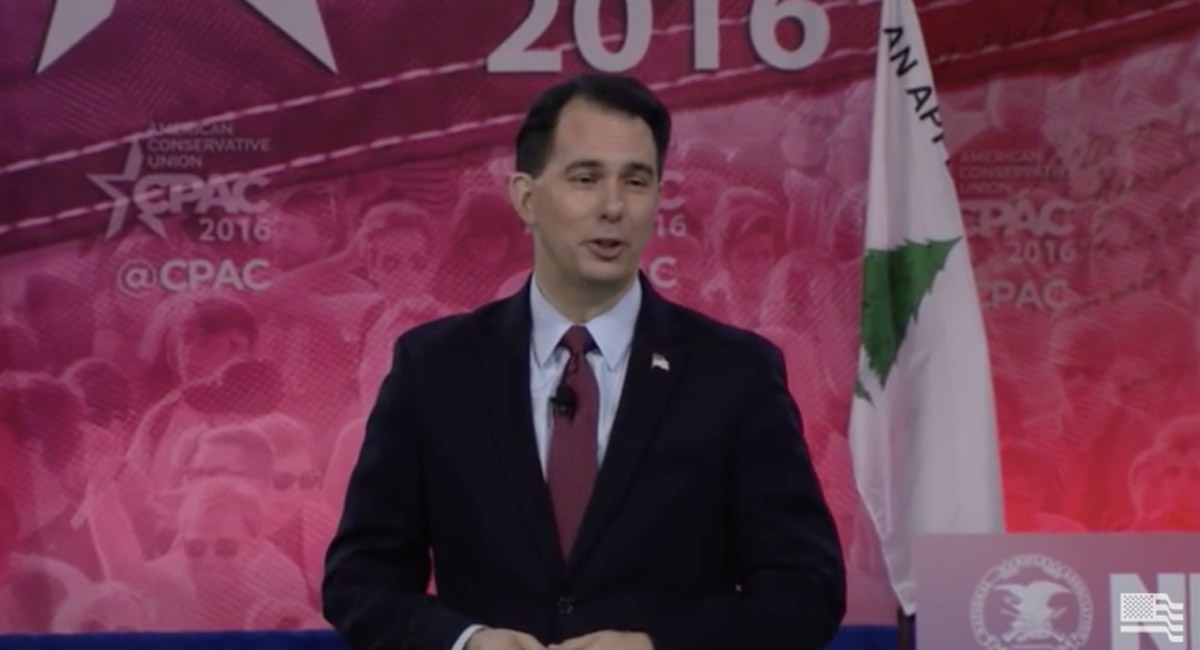 Today at the Conservative Political Action Committee, or CPAC 2019, former Wisconsin Governor Scott Walker made some comments that have abortion supporters up in arms — the problem is, Walker didn’t say what they think he said. Speaking about the seriousness of late-term abortion and abortions in which babies are accidentally born alive, he stated, “By the way, it’s not live-birth abortion. It’s not infanticide. It is murder. If you take the baby home and kill the baby at home, it’s murder, and the same thing’s true at the hospital.” In other words — killing a child is… killing a child, in or out of the womb.

However, some seized upon only part of Walker’s comments, claiming he stated it is common practice for children to be taken home from the hospital and then murdered — a perfect example of fake news. While this kind of fabrication and complete misrepresentation surely has garnered certain “news” outlets some clicks (and generated tweets of outrage from pro-abortion groups), Walker wasn’t saying this. At all.

Perhaps Aaron Rupar — apparently a Vox “journalist” — should actually watch the video he posted with the following Tweet (warning: profanity):

“By the way, it’s not live-birth abortion. It’s not infanticide. It is murder if you take the baby home and kill the baby at home, it’s murder.”

Nobody disagrees with that! pic.twitter.com/w6Q8B6wDrA

It also didn’t help that HuffPost writer Sebastian Murdock was also outraged, leaving some to wonder just how out of touch today’s journalists are. He wrote:

The annual Conservative Political Action Conference began Thursday with the former governor of Wisconsin doing what he does best: telling lies to an audience.

As conservatives continue to pout about a failed bill that would have banned abortions after 20 weeks of pregnancy and could have put doctors performing it in jail for five years, Scott Walker appeared to compare having an abortion to taking a baby home from the hospital and killing it later.

In referring to a failed 20-week abortion ban that took place over a year ago, it seems Murdock has missed the big news of the week: the Born-Alive Abortion Survivors Protection Act just failed to pass in the Senate — a bill that would have required medical care be given to abortion survivors and would have penalized those who broke the law. The “infanticide” comment Walker was referring to was well understood by the CPAC audience, which appears far more aware of this failed legislation than the HuffPost.

And where, exactly, was Walker’s ‘lie’? Perhaps Murdock is unaware that pro-lifers believe that aborting a human being in the womb is akin to murder. As Walker said, abortion kills a human being — just as if someone were to take a newborn home and kill that child once outside the womb. Clearly, if one watches the video, one can see that this was the context of Walker’s comments. This shouldn’t be controversial unless a journalist really has no idea what pro-lifers believe. Human beings in the womb, or out of the womb, are valuable and should not be murdered. This is standard pro-life belief.

Rafi Schwartz at Splinter News apparently missed Walker’s meaning, too, writing, “Then, former Wisconsin Gov. Scott Walker took the stage to spread the anti-abortion lie that some people ‘take the baby home and kill the baby at home.’ Yes, he actually said this out loud.”

Not to be outdone in twisting the truth, the abortion industry seized upon the misrepresentation, calling it a lie to “shame women and criminalize doctors” and to “undermine access to healthcare.” Well, it’s a lie, alright, but it’s not Walker who’s telling it….

These are glaring examples of why so many Americans no longer trust the mainstream media, which is largely beholden to the abortion industry.