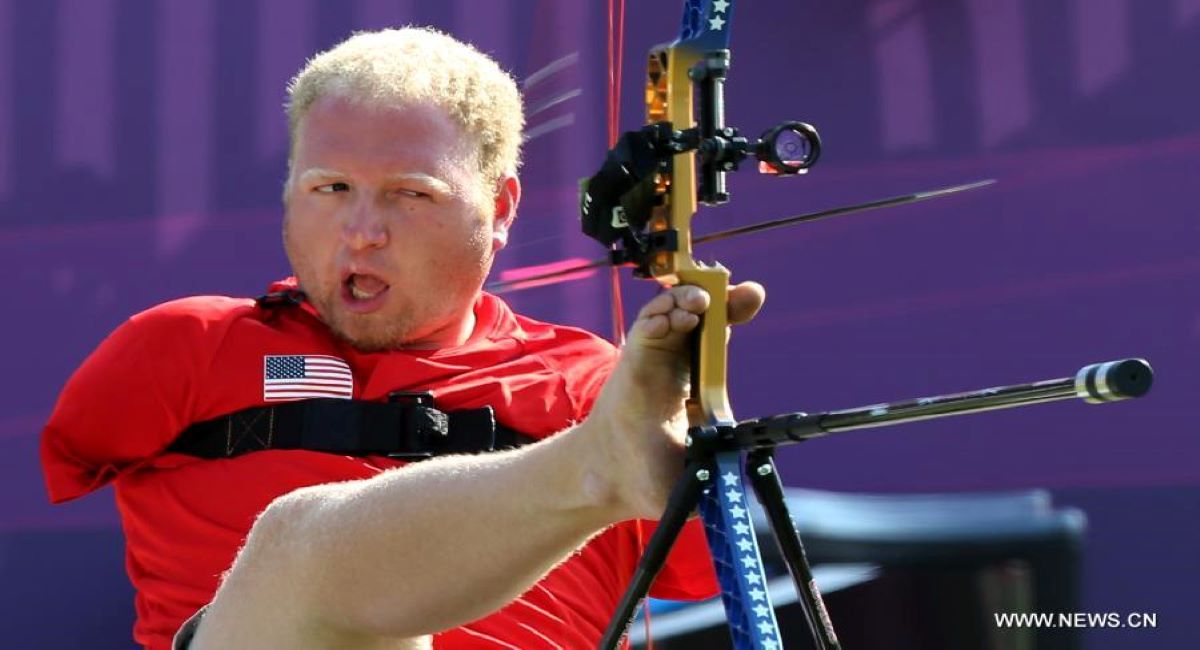 Team USA Paralympian Matt Stutzman is widely known and respected in the field of archery, and part of what makes him so notable is because he competes differently than virtually every other archer — by using his feet. The 38-year-old Iowan recently competed in his third Paralympics Games at Tokyo, and while he did not win a medal there, the 2012 silver medalist vowed that he’s not through and will return for the 2024 Games in Paris.

At four months of age, Stutzman’s biological parents placed him for adoption, and he was subsequently welcomed at 13 months of age into the Stutzman family, gaining eight siblings in the process. According to a biography written in 2013 by his mom Jean, Stutzman was born without arms but otherwise healthy in December of 1982. Statistics from that year estimate the likelihood of being born armless but without other medical conditions at 1 in 350,000 births.

Jean Stutzman wrote, “Our family strategy was to allow Matt the freedom to try almost anything if he could accomplish it under his own steam. The natural tendency would have been to rush in and help him… [but instead] Matt learned to handle life without special accommodations. This would enable him later in life to go and do anything he put his mind to.”

Stutzman took up bow hunting as a teen in order to be able to hunt with his dad, later on using that same knowledge to put deer meat on the table for his three sons, whom he is raising as a single parent.

After winning the silver medal in 2012, Stutzman returned to the Games in 2016 and qualified again for the 2020 (rescheduled to 2021) Games in Tokyo, destroying a world record during the Paralympic Trials. Stutzman frequently competes against able-bodied athletes to continue honing his skills.

In an interview with Team USA, Stutzman acknowledged his desire to be an inspiration and role model for others, but first and foremost for his young sons. “I want them to grow up being good men. I don’t want them to be lazy. I had the perfect excuse to be lazy and I chose not to,” he said. “You can go out and get whatever you want, if you just work hard at it. If I can portray that to them — and they can actually learn that — then my work will feel like it is done.”

Stutzman’s story certainly is inspirational for those with or without physical disabilities. Yet, tragically, many children diagnosed prenatally with disabilities like his are often cited as justification for the necessity of even late-term abortions. This sends a message that anyone with a physical disability would be better off dead.

Matt Stutzman is a clear reminder of everything that is wrong with that mentality.