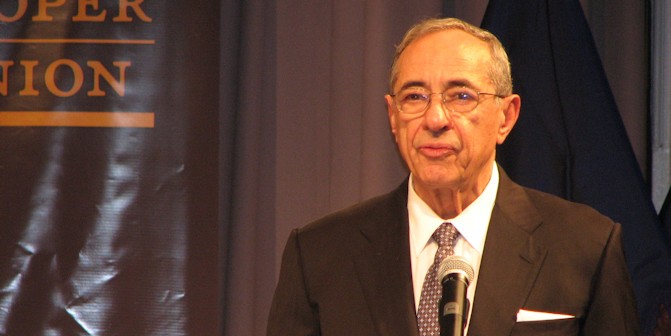 “I’m personally against abortion, but I don’t believe I should tell other people what to do.”

Lines like this are common, but perhaps not as infamous as the utterances of Mario Cuomo, former governor of New York (1983 -1995). Cuomo (82) died on New Year’s Day, and he left behind memories of a battle with the Catholic church on the issue of abortion.

Recently, George J. Marlin in Human Life Review recounted the very public battle between Cuomo, a professed Catholic, and Cardinal John J. O’Connor, who took a public stand against Cuomo’s differentiation between the private and public views on abortion. Marlin, in his September article, said:

The governor, who in the early 1970s had been publicly pro-life, changed his position after losing a primary for lieutenant governor in 1973 and then a race for mayor in 1977. To advance his career, Cuomo adopted the now familiar line that, as a Catholic, he was personally opposed to abortion. But as an elected official it would be wrong for him to impose his religious beliefs on the general public.

Cuomo certainly sounded pro-life, and he appeared to believe he was. The man who noted, “A fetus is different from an appendix or a set of tonsils” went on to articulate the power of life and the opposition to abortion as a measure of his own faith as a Catholic, though he also refused to take a public stand to fight the atrocity.

In a famous 1984 speech at Notre Dame, Cuomo said:

As Catholics, my wife and I were enjoined never to use abortion to destroy the life we created, and we never have. We thought Church doctrine was clear on this, and — more than that — both of us felt it in full agreement with what our hearts and our consciences told us. For me life or fetal life in the womb should be protected, even if five of nine Justices of the Supreme Court and my neighbor disagree with me… At the very least, even if the argument is made by some scientists or some theologians that in the early stages of fetal development we can’t discern human life, the full potential of human life is indisputably there. That — to my less subtle mind — by itself should demand respect, caution, indeed . . . reverence.

The beauty of these words was soon overturned when he added:

[T]hose who endorse legalized abortions — aren’t a ruthless, callous alliance of anti-Christians determined to overthrow our moral standards. In many cases, the proponents of legal abortion are the very people who have worked with Catholics to realize the goals of social justice set out in papal encyclicals……Certainly, we should not be forced to mold Catholic morality to conform to disagreement by non-Catholics however sincere or severe their disagreement.

These comments opened up a battle between Cuomo and the Catholic church. Cardinal O’Connor, who dared to call the governor on his forked tongue, led the charge. While rumors rolled about whether the O’Connor was trying to excommunicate Cuomo, some things were certain, including O’Connor’s disapproval and public battle with the Catholic who supported abortion rights. O’Connor said:

I flat out think [Cuomo’s] wrong. I don’t think that makes him evil. It makes him wrong. He makes a serious effort to theologize his way through it and I think he’s been unsuccessful.

Cuomo once said that he wanted to be remembered as honest:

One of the simple things I wanted to achieve is – I want to be governor. I want to be the hardest working there ever was. And I want, when it’s over — and I figured on four years at first – I want people to say, now, there was an honest person.

Many Catholics, instead, only remember that he aligned with them personally but rejected using his political position to fight for life. And by non-Catholics he was known as a “liberal icon,” as a story in Time magazine said, also referring to him as “forceful defense of liberalism.”

Ironically, Cuomo argued against himself in his own 1984 speech, in which he claimed that religious beliefs should not be imposed by those who don’t hold them. He said:

Put aside what God expects – assume if you like there is no God – then the greatest thing still left to us is life. Even a radically secular world must struggle with the questions of when life begins, under what circumstances it can be ended, when it must be protected, by what authority; it too must decide what protection to extend to the helpless and the dying, to the aged and the unborn, to life in all its phases.”

Even without his Catholic proclamations, Cuomo knew when life began. Sadly, we lost not only a successful politician, but also a chance for a man with great power in office to help defend the lives of the most helpless and dying.