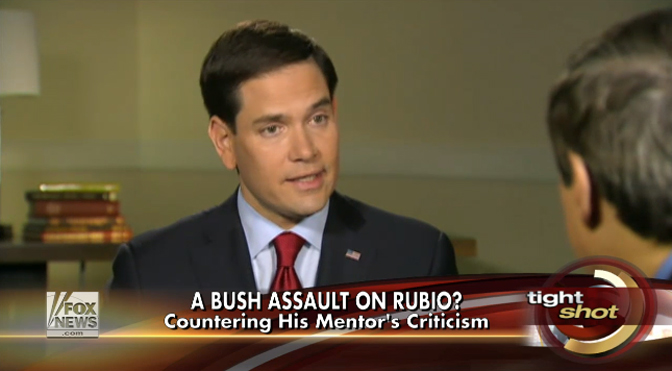 The pro-life community has come far in educating society on the horrors of abortion and on the humanity of the preborn in the womb… so far that even U.S. Senator and Presidential candidate Marco Rubio has defended his pro-life view – that all lives, no matter how they were conceived, deserve protection – multiple times on national television, and seems to be no worse for wear. Perhaps that’s because his view is not as rare as the mainstream media would like to portray it.

On Sunday, Rubio again articulated his position in an interview with Howard Kurtz on FOX’s Media Buzz. When Kurtz told Rubio that a group of Jeb Bush supporters – Right to Rise PAC – may be looking to use Rubio’s no-exceptions position on abortion against him (despite Jeb Bush’s objections), Rubio was undeterred…

Rubio has not been secret about his position. In the first GOP presidential debate, FOX’s Megyn Kelly asked him if he favored a rape/incest exception for abortion. He replied:

I have never said that and I have never advocated that. What I have advocated is that we pass law in this country that says all human life at every stage of its development is worthy of protection. In fact, I think that law already exists. It’s called the Constitution of the United States.

And I think future generations will look back at this history of our country and call us barbarians for murdering millions of babies who we never gave them a chance to live.

Rubio isn’t alone. The view that all preborn children should be protected by law, regardless of how they were conceived, has been gaining traction in the pro-life movement for quite some time. Recently, Live Action president Lila Rose weighed in on abortion for cases of rape and incest, asking FOX’s Sean Hannity and his pro-abortion guest, “Why should a child who’s conceived in rape be given the death penalty for the crimes of his or her father?”

And the voices of those among the so-called abortion exceptions are growing louder as well. Rape-conceived pro-life advocate Juda Myers of Choices4Life pointed out that the criminal in these “hard cases” is the rapist and not the unborn child. “To condemn a human for the crime of another is not justice,” says Myers.

Rubio is not new to angering abortion advocates with his no-exceptions beliefs. He has called abortion bad for our society. “There is no compelling argument for why a woman’s right to choose trumps a child’s right to live,” he once stated. It appears he isn’t backing down from his position.