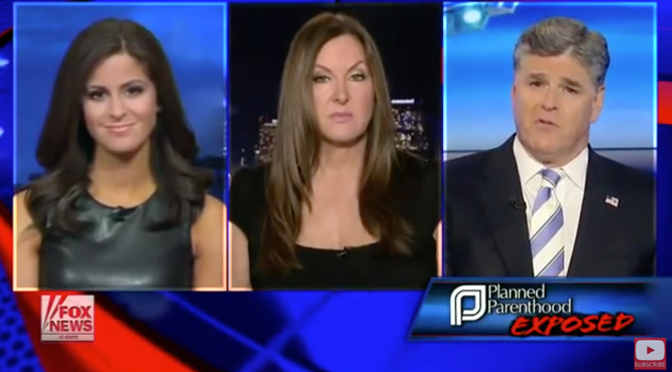 As the 2016 election amps up, abortion is once again making headlines. The debate is being fueled by damning undercover video showing Planned Parenthood and National Abortion Federation doctors openly discussing how they advocate and facilitate the harvesting of aborted baby parts.

This was the background for a debate on the Fox News Channel’s Hannity program between radio talk show host Leslie Marshall and Live Action president Lila Rose. Rose criticized the Obama Administration for ignoring the scandal, and later in the conversation, defended children conceived in rape, saying, “Abortion is not a pathway to healing; it’s another violent act.”

On the Obama Administration, Rose blasted the Justice Department for not investigating Planned Parenthood for “apparent illegal activity on tape”:

People across the country are expressing their outrage on both sides of the political spectrum. So that’s why it is a shame that our Department of Justice right now is not doing a thorough investigation like many states are in order to ultimately lead into prosecution… where the crimes are taking place and convict these top level abortionists of selling body parts of committing illegal late term abortions…

Later in the show, Hannity shifts gears to ask his guests their thoughts on a clip from The View, in which hosts Whoopi Goldberg, Joy Behar, Raven-Symone, and Michelle Collins criticized GOP presidential candidate Dr. Ben Carson’s views on abortion after the 2016 presidential candidate told Meet the Press, “If people can come up with a reasonable explanation of why they would like to kill a baby, I’ll listen.”

On the clip you hear Behar’s response to Carson’s statement,“What can you say to that, you know? It’s pathetic.”

After playing the clip, Sean Hannity defined his position on abortion by saying, “I take the position that it is rape, incest and mother’s life.”

Abortion defender Leslie Marshall pointed out that Carson did not share Hannity’s exceptions, asking, “This is a man who doesn’t agree with you with regards to rape and incest, Sean. How do we tell a child that’s been raped by the stepfather… that she can’t make that choice even though it’s legal now?”

Then Rose weighed in, asking, “Why should a child who’s conceived in rape be given the death penalty for the crimes of his or her father?” She continued:

I think we can do better for women who are victims of sexual abuse and trauma to say that abortion is somehow a pathway to healing. Abortion is not a pathway to healing; it’s another violent act. And that’s why we need to be holding Planned Parenthood accountable for these violent acts and the selling of baby body parts. And the ladies of The View, by the way, do not speak for American women. American women are largely against many kinds of abortion and that’s where we stand.

Rose is absolutely correct, and many women who were conceived in rape would agree. Organizations like Choices4Life and Savethe1 have emerged across the nation to give a face to the children people like Marshall and Hannity say are expendable – those conceived in rape and incest. In fact, next May in Mississippi, people who were conceived in these circumstances plan to march against the state’s law allowing rape in cases of abortion – 50 years after the fact. The Freedom March Life Wins event is being hosted by Choices4Life on Friday May 6th, 2016, in Jackson, Mississippi.

Event organizers say the goal is to show the world that “love wins even after tragedy.” More information is available at the Freedom March Life Wins website or on their Facebook page.