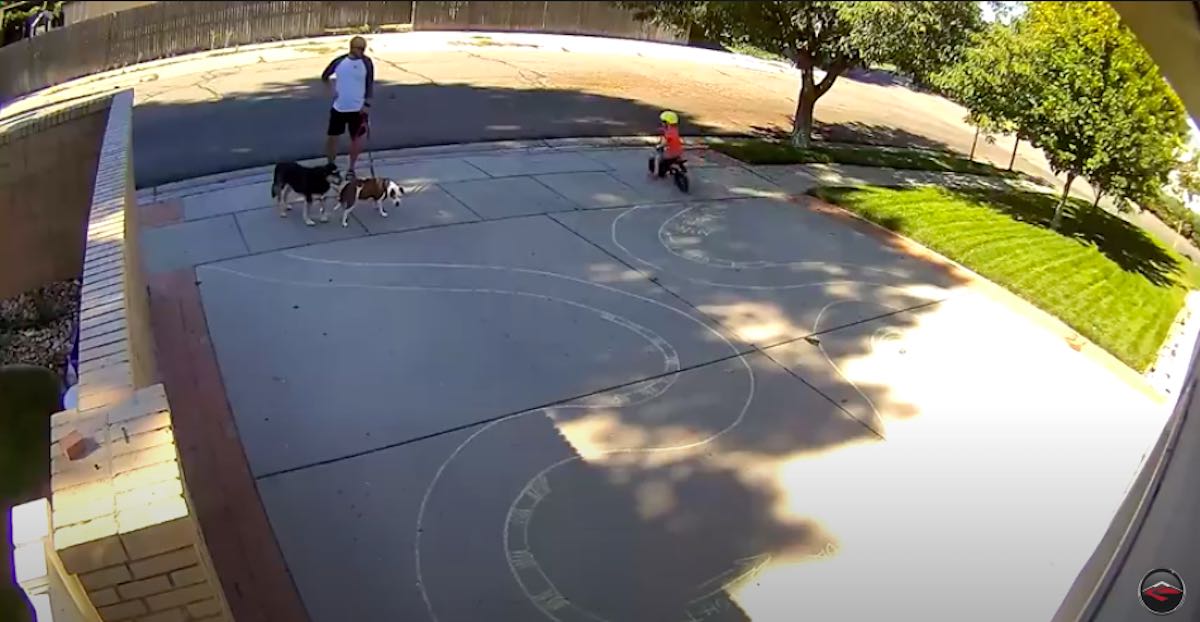 It is increasingly common to hear adults complain about the presence of children and to denigrate childrearing. Children are often seen as a hindrance to happiness or an inconvenience to professional goals. Child-free travelers have even been vocal about their willingness to pay extra for flights, cruises, and travel destinations where no children are allowed.

But in the midst of this anti-child sentiment comes a ray of light from one man chose a different way, to “enjoy the vibrant energy that children bring” instead. Dave Palazzolo, one of the creators behind the motorcyclist enthusiast website Canyon Chasers, noticed that his driveway security camera was alerting him to the presence of someone every evening. He soon learned it was a very young visitor.

In the description for the YouTube video posted by Palazzolo, he says, “Every night I would get an alert from my driveway security camera, and at first I was a bit annoyed, but then I found myself looking forward to the evening alert. And then inspiration struck, in the form of my wife giving me this great idea. What transpired has turned into the best part of an otherwise dreary pandemic summer.”

The video shows footage from Palazzolo’s security camera, capturing a little boy biking along the sidewalk with his mom. Unable to resist the large, open, flat driveway, the little boy cruises around while his parents watch and wait with dogs on leashes. Text on the screen reads, “Almost every night I got a motion alert from my driveway security camera. It is always this same kid just tearing it up o the flat concrete.” Footage from multiple nights shows the little boy in various outfits, sometimes turning in to ride around from one direction and sometimes from the other. Palazzolo wrote, “something had to be done.” The solution? “… I built him a racetrack!”

In a priceless, heartwarming snapshot of the making of a memory, the next frame shows the exact, electrifying moment that the little boy rode up the following night and realized what had happened. He stops, looks at the driveway, and his mom motions to the “track” entrance, marked with a pink arrow. He enters the track, following several curves, and shoots exuberantly out the exit onto the sidewalk to continue the walk with his mom. Palazzolo wrote in the video, “whenever it rained, I would build a new one.”

The footage eventually shows other neighbors walking, biking, and pushing strollers around the track themselves, noting “everyone loved it.” The video closes with the words “Shred-On Little Dude!”

The magic of the video is in Palazzolo’s ability to be captivated again by childlike wonder, entering into a view of the world through the excited, wide-open eyes of a child, and then responding with big-hearted ingenuity (at the prompting of his smart wife!).

The driveway racetrack is a poignant reminder of a classic Mother Teresa quote: “Not all of us can do great things, but we can do small things with great love.”