That business is Planned Parenthood. For over 100 years, it has worked hard to make black people history. It failed to do so with its original Negro Project, promoting the lie that birth control would eliminate poverty. Many leaders in the black community knew racism when they saw it. Fannie Lou Hamer knew it. The voting rights and anti-poverty activist, who was “sick and tired of being sick and tired”, fought against Planned Parenthood. Hamer was a prolife adoptive mother who had been forcibly sterilized in 1961 in Mississippi. She understood freedom was not in a birth control pill or in the forceps of an abortionist. From her speech “America is a Sick Place and Man is on the Critical List”, she summed up her feelings about eugenics: “So we got all kinds of children, and I’ll tell you the next thing that I don’t buy, I don’t buy distributing [the] birth control pill and legalizing abortion, because they’re talking about us! If you want to abortionize somebody, do it to yourself because I’m going to try to keep the children.”

Efforts to severely reduce or eliminate births in poorer black communities was the goal of the American Eugenics movement, led by the most prominent eugenicist—Margaret Sanger. In a day and age when liberals are triggered by historical statues and what those figures represented, they’re conveniently selective in their outrage. Sanger advocated forced sterilizations, said birth control was the “process of weeding out the unfit, of preventing the birth of defectives or of those who will become defective”, and launched the world’s most powerful population control business that practices an even more violent form of eugenics, today, than in her time. Even Sanger, in her typical duplicitous way, denounced abortion.

So, which Margaret Sanger does Planned Parenthood—the leader killer of black lives—celebrate? The birth control crusader who believed she was ridding the world of “defectives”? The racist who boasted of keynoting a Ku Klux Klan rally about the “benefits” of birth control? The elitist who used her oil tycoon husband’s wealth (so much for patriarchy) to push her eugenics agenda? Or the hypocrite who declared in her Birth Control Review publication that “while there are cases where even the law recognized an abortion as justifiable if recommended by a physician, I assert that the hundreds of thousands of abortions performed in America each year are a disgrace to civilization”?

And now, over 50 years after Sanger’s death, her legacy has caused a grim reality for the black community in NYC—the birthplace of Planned Parenthood. More black babies are aborted than born alive. For every 1,000 born alive there are 1,039 aborted (it was 1,101 the previous year). No other demographic even comes close to this destruction (484 Hispanic babies aborted and 233 white babies aborted for every 1,000 born alive). The black community is the only demographic where there are more induced deaths than births, and yet this is called “reproductive justice”! When did a health disparity that resulted in 2.1-4.5 times more deaths become something worth celebrating? It’s reproductive injustice and pro-abortion liberals, including LGBT orgs and #BlackLivesMatter leaders, all hail this violent discrimination of abortion as “equality”. How can black lives matter—or lives of any hue matter—when the most defenseless among them are destroyed as a form of someone else’s broken concept of “freedom”?

It would be humorous if it weren’t so tragic that “reproductive justice” activists are calling for a black “feminist” woman to be the next President of Planned Parenthood (some seem to have forgotten about Faye Wattleton). You know, because that would make Planned Parenthood less racist…just like Jews serving on NAZI Germany’s “Jewish Councils” (or Judenräte) made the Holocaust less anti-Semitic, right? The controversial Judenrat was responsible, in part, for “organizing the orderly deportation to the death camps”. Today’s Negro Project 2.0 includes influential African-American politicians, pastors and celebrities who assist in organizing the daily flow of black mothers into Planned Parenthood’s death centers. Keep in mind, Planned Parenthood was spawned by the very same vile pseudoscience as the Holocaust. Black owners of slaves in America didn’t make slavery less racist; so let’s disabuse anyone of the notion that skin color or gender motivate people to do what’s best for those with the same skin color or gender.

It’s why The Radiance Foundation joined with a coalition of pro-life leaders, local pastors and grassroots activists (even including representatives from the National Action Network and the NAACP!) in Cleveland, Ohio to respond to the state’s largest abortion facility’s racially-targeted billboard campaign. Preterm placed 9 out of 16 of its abortion-selling billboards in neighborhoods that are 75% or more African-American declaring nonsense like “Abortion is sacred”, “Abortion is gender equality”, “Abortion is a blessing”, “Abortion is a family value” and “Abortion is safer than childbirth”. 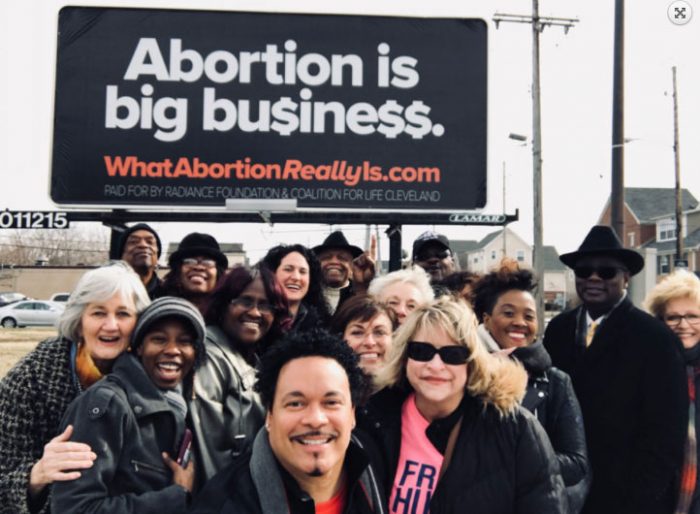 Fannie Lou Hamer made history and fought for true equality. She helped to change America for the better. And if she were alive today, she’d be “sick and tired of being sick and tired” of Planned Parenthood’s continued targeting of vulnerable black communities. She considered abortion to be genocide in the black community. She even laid out the case, back in 1971, for how birth control could’ve made her history: “Now I was born fifty-three years ago to Mr. and Mrs. Jim Townsend. And I am the twentieth child. And so help me God, I respect my mother so much that they didn’t have them birth control pills because if they had them I probably wouldn’t be standing here today. So as I made that narrow escape to be here, I fight for the other kids too to give them a chance. Because if you give them a chance they might come up being Fannie Lou Hamers and something else.”

Editor’s Note: This article was originally published at The Radiance Foundation and is reprinted here with permission.