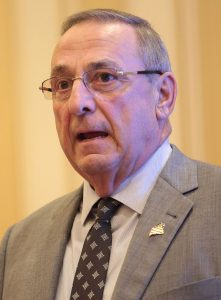 In 2015, Maine lawmakers rejected a bill that would legalize assisted suicide. Now, another bill is making its way through the legislature, which would permit people with terminal illnesses who are expected to die within six months to receive fatal prescriptions from their doctors to end their lives. But the bill has hit a major stumbling block: Governor Paul LePage has come out against the bill, promising to veto it if it reaches his desk.

LePage appeared on WVOM’s “George Hale and Ric Tyler Show,” where he was asked his opinion about the legislation, and he responded, “I’m against it.” LePage was then asked if he would veto the bill, and he said yes. “Yes. Here we are talking about death with dignity and we’re sitting there, human beings, passing judgment on who can live and who can die. No, I don’t believe in it,” he explained.

With LePage’s promise of a veto, the legislation would need two-thirds of the Maine House and Senate to vote in favor of the bill. The effort to legalize assisted suicide in 2015 failed by just one vote.

Assisted suicide has been growing in popularity across the country; if this bill passes, Maine would become the seventh state (and eighth jurisdiction) to legalize it. And in states where it is already legal, abuses have already begun to take place. In both California and Oregon, for example, patients are told that treatment for their illnesses will not be covered by their insurance, but that drugs for them to commit suicide will be covered.

While advocates call it “death with dignity,” the reality is, there’s nothing dignified about a practice that preys on people who are at their most vulnerable, a practice that agrees with people who feel that their lives are no longer worth living.

The truly sad thing about assisted suicide is that in many cases, it can be prevented. Multiple studies have found that people who request assisted suicide are often struggling with low family support, fear, hopelessness, and clinical depression. The studies have found that when these underlying problems are treated — such as clinical depression — the request for assisted suicide is often withdrawn. People who are fighting terminal illnesses need support and compassion, not affirmation that their lives are not worth living. All lives have dignity and value.

Thank you to Governor LePage for taking a stand against the culture of death, and may other politicians across the country follow his lead.