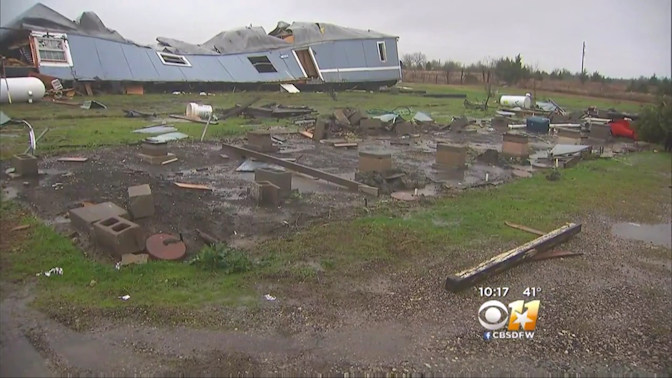 Christmas is often a time of joy and laughter but for many this week disastrous storms turned the holiday into a season of tears. Among several heart wrenching stories, one that involved the love of a caring father emerged after his newborn baby girl became one of the 11 victims killed during Christmas weekend’s deadly outbreak of devastating tornadoes in North Texas. The baby’s father, injured and bleeding, had one request for his neighbor – to take his baby to the hospital.

In a hard hit area just north of Dallas, a rural Collin county family gathered to celebrate the arrival of their newborn baby girl just days earlier. Jose Daniel Santillano along with his wife Zuleyma and 4 children were among many families whose peaceful December 26th was suddenly turned upside down after a tornado threw their mobile home approximately a hundred feet from where it originally stood.

Neighbor, Debralee King explained to CBSDFW what happened just after the storm passed as she saw Santillano running toward her, injured himself and carrying his newborn daughter lovingly in his arms.

“At first I didn’t realize what was going on,” she said. “I thought they were glad the storm was over.” King explained, she heard the baby’s father beg her to take his little daughter to the hospital immediately.

King was stunned at first, that the man would hand his child over to her, but the loving father had other family members he had to rescue and he knew his daughter needed help. To most people like myself who watched the devastation unfold as we sat just a few miles from the danger, the loving and trusting response of this father was overwhelming. The emotional story of Jose Daniel Santillano swept through the Texas news sites, but, tragically, the news was not good. Although the baby’s father and mother both suffered injuries and needed to be hospitalized, and their three other children made it out without harm, their 2-day-old newborn identified later as Aeleyah Santillano did not survive.

“I was holding her little fingers, When they’re little they like to curl their little fingers around you. Her little hand was cold…I kept saying please baby, please baby be okay. I did the best I could but now begin to think it wasn’t enough it’s just haunting,” King said.

Captain Jim Moody of the Collin County sheriff’s department said that it was unclear whether Aleya Santillano died in the tornado or had briefly survived but the family was devastated with their loss. According to reports, a Blue Ridge church has volunteered to let the Santillanos stay in an empty parsonage while they recover.