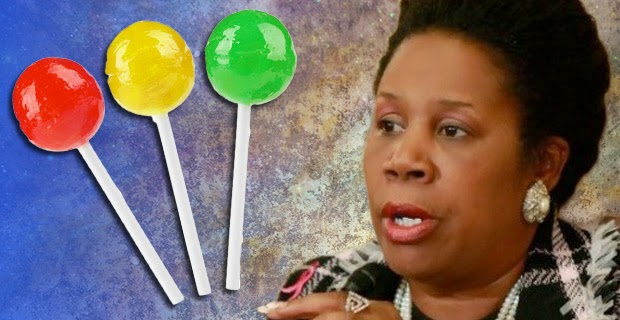 Judging from some of the things she says,  Democrat Texas representative Sheila Jackson Lee occasionally embodies Mark Twain’s quip, “Suppose you were an idiot. And suppose you were a member of Congress. But I repeat myself. ”

In 2011, arguing against the Pence Amendment to appropriations bill H.R. 1, which proposed defunding Planned Parenthood and actually succeeded, Jackson Lee said: “This is not about abortion; this is about saving lives.”

That same year, during the House floor debate on the Protect Life Act, Ms. Jackson Lee defended abortion as a “needed action” and referred to the heartbeat of a fetus as a “sound.”

So – and this is just a guess – it’s very likely that Sheila Jackson Lee, being the generous person she is proving to be, as a show of support for the right to choose, would gladly hand out orange juice to teenagers recovering in an abortion clinic.

But on this occasion, it’s not orange juice Sheila’s handing out.

Instead, Ms. Jackson Lee was recently on the border handing out lollipops to immigrant children who fall into the same category as American babies who Lee would normally argue, based on poverty level and potential for a bleak future, deserve to be aborted. These are extremely needy children who, along with the fact that their parents handed them over to coyotes to be herded north across the border, certainly fall into the poor “ramen noodle/mayonnaise sandwich-eating” group that pro-abortion advocates like representative Gwen Moore (D-WI) think Planned Parenthood and abortion are here to deny the right to life to.

After her visit to the border, speaking at a House Judiciary Committee field hearing in Texas, Homeland Security Committee member Jackson Lee said this: “I always like to take things when I visit people who are detained for reasons that are not of a criminal nature, whether it is to visit with those in Darfur, or to be able to engage in Afghanistan, or to be able to talk to children wherever they are.  Homeless children.”

Holding up a plastic bag filled with lollipops, Sheila informed everyone who didn’t know what they were that “[t]hese are lollipops.”  Later, Sheila described her brief visit as follows: “I took lollipops along with my colleagues into those detention centers where children were. I wasn’t armed; I wasn’t fearful for my life.”

Wow! What a fearless, life-affirming declaration coming from a pro-abortion politician who also opposed Arizona Republican Rep. Trent Franks’s bill to put limitations on sex-selective abortions. At that time, Jackson Lee said that if the “draconian” bill limiting gender-based abortions was passed, it would mean “the next act will be dragging women out of patient rooms into the streets and screaming over their bodies as they get dragged out of getting access to women’s health care.”

Somehow Sheila Jackson Lee is able to ignore the children killed from her support of abortion based on economic level and gender as she is handing out lollipops to deprived Central American children.

With Jackson Lee’s approval, 3,000 babies a day in America are doomed when their mothers cross the threshold into the abortion clinics…where Sheila won’t be waiting with lollipops.