In 1970, Fordham law professor Robert M. Byrn detailed his objections to abortion in a case published in the Notre Dame Law Review. Byrn, a criminal law specialist, gave explicit details of the abortion procedure in this article and also filed an unsuccessful challenge to New York’s state abortion law. Byrn wrote of the preborn baby, in part, saying, “The fetus at eight weeks has a pumping heart with fully deployed blood vessels and has all other internal organs. The face is completely formed, and the arms, legs, hands, feet, toes and fingers are partially formed. The fetus will react to tickling of the mouth or nose, and there is readable electrical activity coming from the brain.”

Byrn then shared some haunting statements from physician Paul E. Rockwell, M.D., Director of Anesthesiology at Leonard Hospital in Troy, New York, who said, “Photographs of the fetus around the eighth week present an unmistakable human baby with rather blunt features and extremities.  However, such pictures invariably have been taken after the death of the fetus following an abortion,” adding, “It is death which superimposes the bluntness of appearance.” 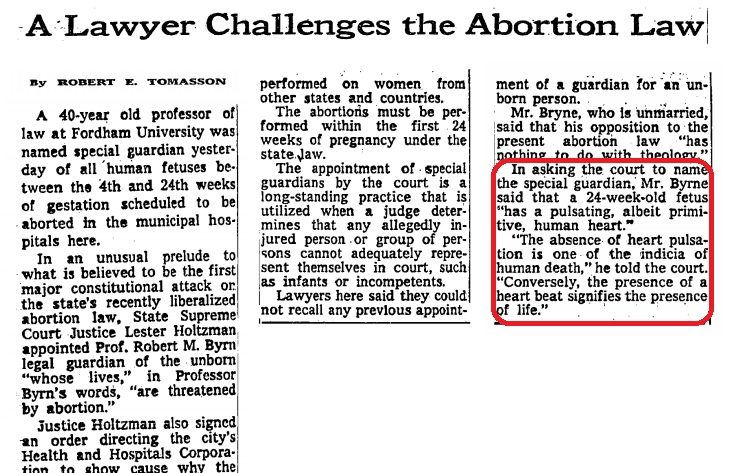 Rockwell went on to describe his experience seeing a child yet living after treating a woman for an ectopic pregnancy at two months:

Eleven years ago while giving an anesthetic for a ruptured ectopic pregnancy (at two months gestation) I was handed what I believe was the smallest living human being ever seen. The embryo sac was intact and transparent. Within the sac was a tiny (approx. 1 cm.) human male swimming extremely vigorously in the amniotic fluid, while attached to the wall by the umbilical cord. This tiny human was perfectly developed, with long, tapering fingers, feet and toes. It was almost transparent, as regards the skin, and the delicate arteries and veins were prominent to the ends of the fingers.

The baby was extremely alive and swam about the sac approximately one time per second, with a natural swimmer’s stroke. This tiny human did not look at all like the photos and drawings and models of “embryos” which I have seen, nor did it look like a few embryos I have been able to observe since then, obviously because this one was alive!

It is my opinion that if the lawmakers and people realized that very vigorous life is present, it is possible that abortion would be found much more objectionable than euthanasia.

Rockwell went on to describe gruesome abortion procedures being used at that time, including the saline abortion (see Baby Choice) and hysterotomy abortion, as shown in this 1981 Hayes Publishing pro-life brochure (graphic image warning).

Live Action News has previously described gruesome experiments on living abortion survivors, dating back to the 1930s. University of Pittsburgh anatomist Davenport Hooker conducted research on children who survived surgical abortion by hysterotomy and, in 1952, he assembled his footage into a silent educational film called “Early Fetal Human Activity.” The film showed the muscle activity of six fetuses ranging from 8 1/2 to 14 weeks.” Video from that film can be viewed below (warning: Images may be disturbing to some)…

“… to dilate the entrance to the womb, then insert a large forceps and drag out the baby and the afterbirth. This is not as easy as it sounds. The surgeon must work by touch alone. He gives a tug – a tiny arm comes away; then other fragments of the body. The head is always difficult; the skull gets crushed; the eyeballs protrude. All the time the bleeding is profuse. When the abortion has been completed,” writes Dr. Dunn.

“The problem of the disposal of the remains has to be faced by the nursing staff. Incineration is the favored method. So ends the life of another human being – thrown out with a mess of blood clots and dirty swabs, unwanted, unremembered.”

“The woman has a general anesthetic, an abdominal incision, the womb is incised from top to bottom and the baby lifted out. It makes some weak movement of its arms and legs, and tries to breathe. Sometimes it manages a pathetic cry like a kitten; then after a few minutes it dies an asphyxial death and lies coldly in a stainless steel bowl.”

The third method is the most “scientific,” added Byrn, describing the horrific saline abortion method, which actually burns off the baby’s skin:

“A large needle,” Dr. Dunn tells us, “is inserted through the abdomen into the womb and a strong solution of salt or glucose is injected. The baby can be felt to make a few convulsive movements, and within a few minutes it dies. In about twenty-four hours labor starts and the already disintegrating baby is delivered.”

READ: Abortion survivor to Congress: ‘If abortion is about women’s rights, then what were mine?’

“Abortion is a brutal and violent procedure, which is fundamentally repugnant to the philosophy of medical practice,” Byrn stated.

“Three generations of Americans have witnessed decisions by the United States Supreme Court which explicitly degrade fellow human beings to something less in law than “persons in the whole sense,” he said. “Are not three generations of error enough?”