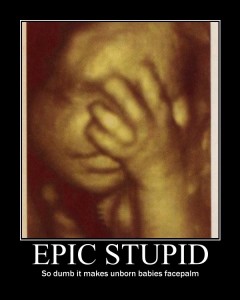 Man, if you’re a pro-choice writer, you’ve got it made. Want to run a hit piece against pro-lifers but don’t have the time, patience, scruples, or intellectual curiosity for fact-checking? No problem! It’s not like the target audience is into that stuff anyway.

His headline and first sentence both matter-of-factly call it “deceptively edited,” yet he never gets around to identifying our alleged deception. Maybe he’s just assuming deceit has to be in there somewhere because he himself didn’t pay a lot of attention to however much of the video he actually watched. See if you can spot the red flag here:

In the videos, notorious anti-abortion activist Lila Rose poses as a 15-year-old girl and tells the counselor that her boyfriend wants to try out some of the sadomasochistic scenarios described in the popular novel, “Fifty Shades of Gray.”

If you guessed “that’s not Lila Rose in the video,” give yourself a cookie. Apparently it never occurred to Gettys to either (a) wonder how one of the most popular and recognizable pro-life leaders in the country, whose face is regularly on national television and who is intensely hated by the organization she’s investigating, could walk into an abortion clinic unidentified; or (b) compare the video he posted to one of Lila’s recent TV appearances to check if the voices are the same. Spoiler alert: they’re not.

With a falsehood that embarrassing right out of the gate, the only direction left to go is down, and fast. Here’s the only point Gettys makes that’s at least related to the video’s content:

Live Action posted the edited videos — which appear to leave out questions posed by the undercover activist about various sexual practices, including urinating and defecating on partners, to the unwitting counselor – and claimed Planned Parenthood workers were teaching teens about “torture sex.”

Gee, if only the extended video was readily available to determine whether context confirms or contradicts the highlight reel.

Oh, wait. It is. It’s right there at the investigation’s website.

The context actually reveals that the staffer’s musings on bodily functions are an entirely unsolicited part of her actively urging “thoroughness” in smut research. Check out this exchange starting around 7:20 (CONTENT WARNING):

PLANNED PARENTHOOD: So you might have to visit a few different sites until you find something.

PLANNED PARENTHOOD: And even on the sites, they can suggest different books, or different guides—

15-YEAR-OLD: Is that, like, a helpful place to—to get some ideas or—

PLANNED PARENTHOOD: Um, you could. You could watch a video and see kind of how they execute it.

PLANNED PARENTHOOD: But it—I just don’t want it to freak you out.

PLANNED PARENTHOOD: People do really weird things. People—there are so many different fetishes out there.

PLANNED PARENTHOOD: I was trying to find the scientific word for it. But there is some really weird stuff out there—which would be weird to me. For some people, that’s completely normal—

Yes, using your significant other as a toilet is merely “weird,” and even that judgment call is relative. Nothing to worry about here; it can all be safely ignored just by repeating “edited” a few times. Somehow.

For good measure, Gettys closes out this hit piece with a little context manipulation of his own:

Rose and [conservative activist James] O’Keefe have argued that, essentially, the ends justify the means in their heavily edited video “exposés” that purportedly show illegal or unethical practices by Planned Parenthood employees.

“It’s a pretty complicated ethical issue,” O’Keefe said. “But we believe there is a genocide and nobody cares, and you can use these tactics and it’s justified.”

This is dishonest on two levels. First it attributes an argument to Lila without any actual quote from her, and second it creates the false impression that “heavy editing” is the “complicated ethical issue” that O’Keefe is referring to. The 2009 LA Times piece Gettys quotes only says, “O’Keefe, 24, said he and Rose have received criticism from some of their associates for using deception.”

To interpret that as a defense of misleading footage—a preemptive admission that the videos they want people to believe shouldn’t be believed—would be insane. Far more likely is that O’Keefe’s referring to an esoteric inter-Catholicism debate over the morals of misrepresenting one’s self to abortion workers—which clearly isn’t what Gettys is interested in here.

We shouldn’t be surprised that these people don’t feel obliged to even watch videos before confidently deeming them fraudulent. They refuse to learn the science of prenatal life before determining the fate of prenatal life, hate the idea of ensuring the choice to abort is fully informed, and dream of criminalizing speech that reveals things they’d rather keep people ignorant about. Pro-aborts are the 21st century’s reincarnation of the Know-Nothing Party.