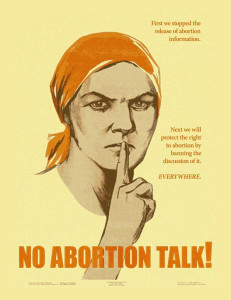 Pro-aborts know all too well that repeating a lie at every possible opportunity is the key to passing it off as truth, which is why, in response to the Susan B. Anthony List’s recent Supreme Court victory, they’ve revived their malicious narrative that SBA was fighting for a “right to lie” when they characterized ex-Ohio Rep. Steve Driehaus’s vote for ObamaCare as a de-facto vote for taxpayer funding of abortion.

That, you may recall, was real lie in this case. As I’ve summarized before, ObamaCare’s supposed barriers to abortion funding don’t change the fact that insurance plans are eligible for federal subsidies even if they cover abortion, that its contraception mandate includes abortifacient methods, and that it dumps millions of bucks into Planned Parenthood’s lap.

At The Federalist this week, Alliance Defending Freedom senior counsel Casey Mattox explains that this isn’t theoretical anymore—as we speak, people’s consciences are under attack by the law Driehaus and his colleagues forced on them:

Not that a little thing like SBA List being right would stop prenatal violence apologists from serving up multiple flavors of deceit.

First, there’s the classic lie masquerading as hard news reporting, demonstrated by the Huffington Post’s Laura Basset. Her piece matter-of-factly declares in the headline, “Supreme Court Moves to Legalize Lying In Campaigns,” and falsely claims the law “prevented [SBA] from making false statements about a political candidate in 2010.”

The closest she comes to balance is a lone statement by SBA president Marjorie Dannenfelser that doesn’t address the accuracy of her group’s claims, and from which a reader would never know that SBA has put forth detailed explanations of their side of the story.

Second, there’s the lie wrapped in legal assessment, written by RH Reality Check’s closest substitute for a “senior legal analysis,” Jessica Mason Pieklo. Sadly, she hasn’t improved since I last called her out on this case for missing a First-Amendment violation that was obvious even to the ACLU. She’s still lying about SBA’s statements being “clearly false,” and in a truly impressive bit of hypocrisy, suggesting “the anti-choice right refuses to accept as truth statements of fact that undercut their political agenda.” To paraphrase the old saying: if you have the facts on your side, argue the facts. If you have the law on your side, argue the law. If you have neither, go write for RHRC.

Next, there’s my personal favorite, the truly audacious “lie while pretending to help the person you’re lying about.” At ThinkProgress, Ian Millhiser endorses SCOTUS’s ruling and condemns the free-speech implications of the Ohio law, but fills his ostensible defense of SBA with potshots at them. “The Case Against Cracking Down On An Anti-Abortion Group That Deceived Voters,” reads his headline, under which he regurgitates the pro-ObamaCare spin and claims “SBA was either lying when they made this allegation against Driehaus, or they did not understand how the Affordable Care Act works.” Oh, they know. And they’ve backed it up. Ball’s in your court, Ian.

And finally, there’s the most (relatively) honest form of dishonesty, the good old-fashioned hit-piece editorial. At The Daily Beast, pro-abortion partisan Sally Kohn writes that the ruling has “expose[d] the right’s pernicious habit of false-fact smear campaigns.” Calling SBA’s messaging a “flat-out lie” on little more than the basis of PolitiFact and Guttmacher said so, Kohn deploys a true marvel of logical knot-tying:

To even file this lawsuit in the first place, the Susan B. Anthony List had to admit it lied. The lying wasn’t an accident or even a momentary lapse in good judgment. It was conscious and deliberate.

So in Sally Kohn’s dementedly self-serving version of reality, someone else can accuse you of violating a particular law, and the very act of defending yourself against the allegation is a de facto admission of guilt. Heads I win, tails you lose. Apparently she’s suggesting that the only way SBA could have standing to challenge an anti-lying law would be if they’re liars, but that’s manifestly absurd—a false charge can wreak havoc with your life just as a true one can.

Basset, Pieklo, Millhiser, Kohn, and their pals are all lying. And they know it. If lying about political issues and candidates is an outrage warranting legal action, then why aren’t lies printed on a website or in print at least as deserving of punishment as lies on a billboard?

Hopefully the judiciary’s eventual decision on the merits of the case will keep government from both, but in the meantime pro-aborts can deceive with the comforting knowledge that most of the speech police are on their side. Pro-lifers will have to settle for having the facts on ours.