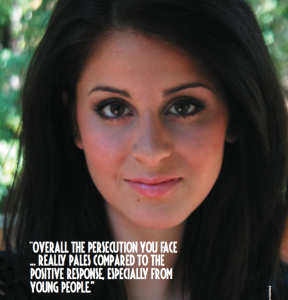 Founder and president of Live Action Lila Rose is featured in a six-page article in the June 2012 edition of Townhall Magazine.

The article is written by Dan Gainor, who describes Ms. Rose as “the thorn in the side of Planned Parenthood” as he discusses the overwhelming success Live Action has had in the past exposing the injustices of Planned Parenthood and the abortion lobby. Gainor recaps the plethora of interviews and discussions Ms. Rose has had on various news outlets like Fox News and CNN regarding her pro-life work.

“For all the Left’s screaming of a ‘war on women,’ they certainly have no trouble waging a war smearing the woman whose actions have helped expose abuse and protect the unborn,” Gainor writes. “Planned Parenthood, which has photos of Lila hanging in clinics to foil undercover work, labels her the ‘infamous anti-choice leader.’” Ms. Rose is sure to note that the real war on women encompasses “‘female genocide in India and Asia’ [as] one more way abortion targets women.”

As for what Ms. Rose hopes for the future, she tells Townhall Magazine she wishes to “immediately carve a constitutional amendment that human life begins at the biological beginning.” She also mentions that over half of Live Action’s Facebook page’s members are girls between 13-17 years old, which indicates that “there’s huge momentum right now for life.” Gainor agrees that it is long overdue.