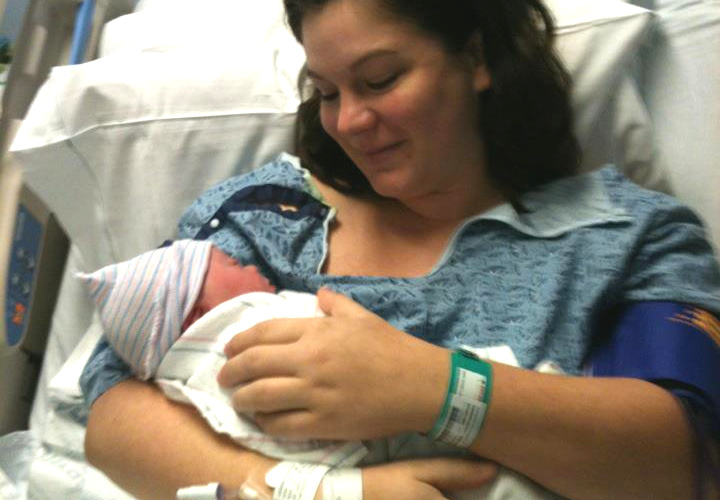 I had never even known someone with Down syndrome. How could I raise a child with it? The image I had in my head was of a child who would fight a myriad of health problems, have trouble learning, and live with us our entire life. The future for us seemed to be very bleak. And this is indeed the stereotype that many people have in their heads, and it’s why so many mothers choose to have an abortion when they’re in my position.

The good news is, this stereotype could not be further from the truth. My son, Wyatt, is now four years old, and most days, Down syndrome isn’t even on my mind. Life with Down syndrome is more normal than people realize. Having a child with it isn’t really all that different from having a child without it. Wyatt is, first and foremost, just a kid.

And maybe if more people knew what day-to-day life raising a child with Down syndrome is like, they wouldn’t be as scared. Every morning, I get Wyatt out of bed. I have four kids, and each of them handles mornings differently. Benjamin, my five-year-old, and Ivy, my two-year-old, will both get right out of bed and come wake me up. Clara, my youngest, will cry until I come get her. Wyatt will be content to hang out. Usually, what lets me know that he’s awake is his singing. He’ll sit in bed and sing to himself, or babble happily, until I get him. I’ll pick him up, and he will immediately hug me and bury his head into my neck.

Every single time, I hold him a little closer, because he gives the best cuddles.

After I get him up, I change him and get him dressed, and then we go to have breakfast. Wyatt has some sensory issues with eating, so he still eats soft food. Usually in the morning, he has yogurt and then some milk. He’s just started pre-kindergarten, so now he’s picked up by the bus and goes off to school. Seeing him walk to the bus with his backpack for the first time made me fight off some major tears!

We were very lucky in that Wyatt has very few health problems. He was born with several heart defects, but they were very minor, and resolved themselves within a few months of birth with no treatment necessary whatsoever. All that was required was that we check in with a pediatric cardiologist every so often, who would give him an ultrasound to look at his heart. He was cleared before he was even six months old.

But that didn’t mean that he’ll never have any other health problems, of course. People with Down syndrome are at an increased risk for a number of things, so Wyatt has a staple of doctors that we check in with once or twice a year: ENT, ophthalmology, endocrinology. He wears glasses and has hypothyroidism, which means that he takes half a pill once a day. I crush it up and mix it in with some applesauce, and he actually looks forward to it every day. He’s had to have a few surgeries — he had stents put into his tear ducts, and had his tonsils and adenoids removed — but these were both minor procedures that only took about an hour. We went home the same day each time. Most of the time when we see his specialists, it’s a pretty low-key visit. He gets bloodwork done once a year, and we’re fortunate to have Nemours Children’s Clinic in my hometown, so all of them are in the same network of providers, and they all have access to the same lab tests. An appointment usually consists of going to see the doctor, they look him over for five minutes or so, ask a few questions, and then send us on our way.

It’s not nearly the dire situation I had pictured it being.

Like most kids with Down syndrome, Wyatt needs therapy. We took advantage of early intervention services, which have helped people with Down syndrome reach milestones much faster than they did in years past. Wyatt receives physical therapy, occupational therapy, and speech therapy. He’s done very well with physical therapy, and can walk and run with the best of them. He has to, if he wants to keep up with his brother and sisters! And where before I had to take him to his therapy appointments, he now receives them at school, so aside from walking with him to the bus, I don’t have to do anything.

While Wyatt is behind other kids his age because of his disability, it isn’t much of a hardship. Yes, it takes him longer to do things, but he does do them. People with Down syndrome are able to walk, talk, learn, and accomplish any number of things. They just might need a little help along the way, and let’s be honest… who hasn’t?

Now that Wyatt is in school, I don’t see him for much of the day. He comes home late in the afternoon, and so far, he seems to be enjoying school. He loves being around other kids, and is always eager to run and play. He’s become a master at climbing on things, which certainly keeps things exciting, and like any good four-year-old, loves Frozen. He will sing along to “Let It Go” and makes sure to belt out the glory note at the end every single time. He loves to sing in general, actually. At night when I put Wyatt to bed, I’ll sing to him and Ivy. He sings along and then claps when it’s over.

With the exception of the occasional doctor’s appointment, Down syndrome isn’t something that I really think about all that much. He’s Wyatt first. He’s my son who loves to sing and play with his brother and gives really good cuddles. Sometimes, even four years later, I find myself looking at him and remembering, “Oh yeah… he has Down syndrome… wow,” and it’s almost still a surprise, because of how normal each day is. It’s not what I pictured.

It’s not what most people would picture, but with the exception of an extra few doctor’s appointments each year, there’s just not much about Wyatt that’s different from my other three kids.

Down syndrome isn’t something to be scared of. It’s not something that will ruin your life. People need to remember that people with Down syndrome are just that — people — who are more alike than they are different. They have friends and family who love them, favorite movies and books and songs, hobbies and interests. They learn and love and work and have fulfilling, valuable lives. And if more people knew that — really understood it — then maybe they wouldn’t find the idea of raising a child with Down syndrome to be so scary.