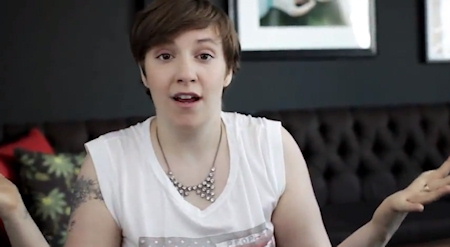 Lena Dunham’s pro-abortion extremism is no surprise. But a new statement she made about abortion will have even the most jaded critics in shock. On her latest podcast, titled Women of the Hour, Dunham discussed abortion. On this episode, titled “Choice”, Dunham admitted that she has never had an abortion… but then added that she wishes she had.

Has Dunham ever come face to face with exactly what an abortion is? Does she wish she had participated in the common abortion procedure explained by a former abortionist in the video below? Or any of the other procedures described with medical animation here?

“I’m a pro-choice woman,” Dunham said. “From an early age, she [Dunham’s mother] taught my younger sibling and me to say ‘anti-choice’ instead of ‘pro-life’ because she wanted to make sure that we knew that everyone is pro-life. Some people are anti-choice.” She then complained about the lack of abortions on network television, and spoke about the “stigma” behind abortion.

“I always thought that I myself didn’t stigmatize abortion. I’m a – uh abortion rights activist, it’s a huge part of who I am. But one day, when I was visiting a Planned Parenthood in Texas a few years ago, a young girl walked up to me and asked me if I’d like to be a part of her project in which women share their stories of abortions. I sort of jumped. ‘I haven’t had an abortion,’ I told her. I wanted to make it really clear to her that as much as I was going out and fighting for other women’s options, I myself had never had an abortion.

“And I realized then that even I was carrying within myself stigma around this issue. Even I, the woman who cares as much as anybody about a woman’s right to choose, felt it was important that people know I was unblemished in this department.”

So to solve the issue of abortion “stigma,” Dunham came to the disturbing conclusion that she wishes she had had the opportunity to get an abortion.

“So many people I love – my mother, my best friends – have had to have abortions for all kinds of reasons,” Dunham said. “I feel so proud of them for their bravery, for their self-knowledge, and it was a really important moment for me then to realize I had internalized some of what society was throwing at us and I had to put it in the garbage.

“Now I can say that I still haven’t had an abortion, but I wish I had.”

This is not the first time that Dunham has dabbled in pro-abortion extremism. She dressed up as a Planned Parenthood abortionist for Halloween, for example. But stating that she wishes she could have had an abortion is not only ghoulish, it’s a despicable sign of how utterly privileged she is (and doesn’t even realize it).

No woman ever wishes to be in the situation where they have to decide whether or not to have an abortion. It’s never a happy scenario. These are women who are scared, and hopeless. They’re often struggling financially, or coerced into undergoing the abortion. Some of them suffer for years after the procedure. No matter why a woman undergoes an abortion, what her reasoning is or how sure she is of her decision, it’s never a positive experience that she hopes for.

… or maybe someone does. Someone named Lena Dunham. Is she actually arguing that she wants to have the opportunity to kill an unborn child, just so she can feel trendy, like she’s done something? So she can fit in with other extremists who brag about their abortions?

It’s clear that Lena Dunham does not speak for your average woman. When it comes to abortion, Dunham’s statements are disturbing on a very, very deep level.