1) Babies are purposely suffocated or otherwise cruelly killed to ensure their deaths.

Um, I cut the umbilical cord first, wait for the baby to expire, and then we do it that way.

Of course, we all know that the umbilical cord is a baby’s means of receiving the vital oxygen her body needs to survive. The umbilical cord also conducts blood to the baby’s body. In order to ensure that a baby does not survive a late-term abortion at his facility, Santangelo purposely suffocates the baby and stops her vital blood flow.

And did we catch the word “wait”? This is a process – suffocation, that is. It does not happen instantly. What terror and pain does an almost-born baby experience through this process? 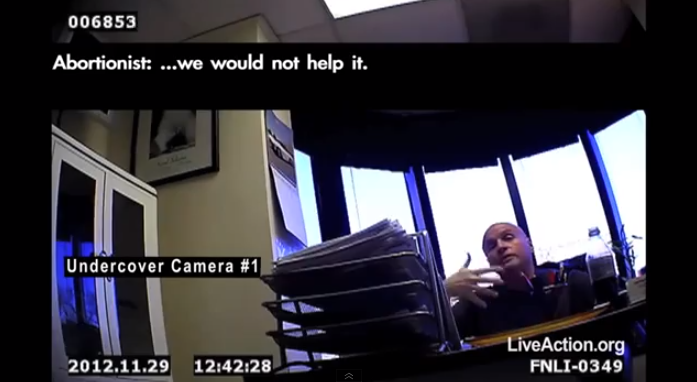 Cesare Santangelo claiming that he would not help an infant born alive after abortion.

2) The ability of babies to survive at later stages of pregnancy is greatly misrepresented.

Santangelo tells the investigator, who is 24 weeks pregnant (or, in Santangelo’s words, 24-25 weeks along) this:

– in your pregnancy, it’s too early to survive, usually. It will expire shortly after birth.

He also goes on to relate false statistics:

When you have a pregnancy that is 23, 24 weeks, if you’re you know, extra – if you – if you do everything possible to help it survive, you know, there’s a – maybe a 20-30% chance that it would survive. If you don’t do anything, then, you know, the chances are much, much less.

This review of 33 different studies on survival rates of premature infants found that “the survival of infants born at 23, and mostly at 24 and 25 weeks of GA is significant in the majority of studies.” Rates vary from study to study, and yet, the conclusion is that a significant number of babies at these stages do indeed survive – quite different from the picture that Santangelo was painting.

3) The law is blatantly ignored.

Few laws are more easily explained than the federal Born-Alive Infants Protection Act. Any baby who is born alive after an abortion is entitled to life-saving medical care. This is the law. And Santangelo knows it, though he ignores it:

I mean, technically, you know, legally, we would be obligated to help it, you know, to survive. But, you know, it probably wouldn’t. It’s all in how vigorously you do things to help a fetus survive at this point.

Ah yes, the typical twisting of the law for your own purposes. Santangelo admits that he is obligated to help a baby born alive after an abortion. He admits that legally, he must provide care. But he also admits that time is of the essence – that help must be given “vigorously” for the baby to survive. And then he concedes that he would not provide that help. Despite the law, he will not comply.

[If the woman delivered before the “termination part of the procedure” was reached:] Then we would do things – we would – we would not help it. Let’s say. We wouldn’t – we wouldn’t uh, intubate, let’s say. Ok? Yeah, we wouldn’t do any extra – you know? … It would be, you know, uh – a person that would be – a terminal person in the hospital, let’s say – that had cancer. You know? You wouldn’t do any extra procedures to help that person survive. Like, ‘do not resuscitate’ orders. You know? We would do the same things here.

Except that a baby born alive after an abortion at the age of 23-25 weeks is not terminal. This baby has a “significant” chance of survival. This baby, under the law, should be intubated, resuscitated, or given any other medical care necessary to survival. But since when has the law mattered to the abortion industry?

4) Hospitals and medical professionals who save infants after attempted abortions are “stupid.”

This admission by Santangelo may just top the iceberg. (Taking the cake just isn’t an appropriate analogy here.)

5) Women are pushed into making a rushed decision.

Even though, according to the Guttmacher Institute, there is no gestational limit on abortion in Washington, D.C., Santangelo tries to pressure the woman into getting an abortion right now. After all, he’d “hate” to tell her to take her time or to think about it:

…and I’d hate to say, you know, ‘Take your time, think about it, go home.’ There’s not much time left. … I mean, I could say we could do this in a week or two, but I’d rather we do it now and be done with it because there’s not much time.

Without a doubt, abortion is inhuman.