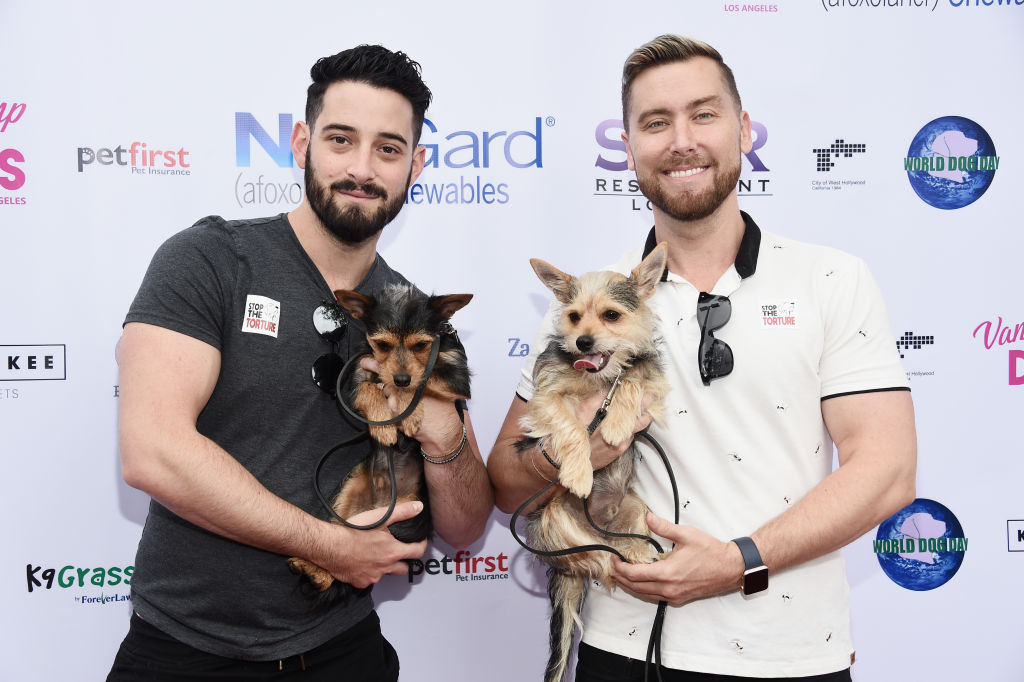 Surrogacy — the use of another woman’s womb to gestate a child for someone else — is controversial for many reasons, not the least of which is the fact that it treats the woman as a mere vessel, if she is acknowledged at all. Like many couples who long for children, Lance Bass and Michael Turchin have turned to surrogacy to obtain a child while treating the women involved as practically invisible. The more Bass speaks about it publicly, the more he puts the dehumanizing language of the fertility and surrogacy industry on display.

In a new interview with Tamron Hall, Bass spoke about his expectations as a parent, as well as the journey to forcibly create a child. “I think I’m intimidated really on the whole diaper changing,” he said. “I’ve never changed a diaper in my life so I hope I know what I’m doing. And overall, just keep them healthy. Making sure I’m doing the right thing and making sure we grow some nice, healthy babies.”

Of course, Bass and Turchin aren’t growing any babies; the child’s mother is. However, Bass’s comments seem to credit only himself without an acknowledgement of the mother’s existence. The couple, however, complained about how difficult it has been to find women to create children for them on demand, speaking of the women as if they were farm animals not producing enough eggs to meet their demand.

“We got all the way down the path of about to retrieve their eggs,” Turchin said, describing the process of IVF and surrogacy. “Some just wouldn’t produce enough eggs, some weren’t good genetic matches. If you’re going to be a match, you don’t want to even risk it.”

Even women who were willing to carry children for them — but couldn’t, due to medical problems — were still treated as inconveniences who wouldn’t perform on demand. “This time around, we had to start all over again from the beginning,” Turchin complained. “Not only did we need to get a new egg donor now because we found out she had early lupus, but on top of that, when we did our egg retrieval, we only had two healthy embryos. Normally, the number’s much higher. So we put both in and once she miscarried, we had to start all over from scratch again this past year.”

The attitude is that these women failed Bass and Turchin by not producing enough eggs for the two men to use. And when the women did get pregnant, it was still treated as the couple’s achievement — the surrogate was just a vessel purchased for their use, an item that failed to function according to expected specifications.

“We’re two and a half years in and we keep running into a lot of different hiccups,” Bass said. “We have not been – we haven’t been pregnant since last year, you know, when we lost them last year. But now, we found a new donor and we love the donor, so we have our embryos ready to go right now. Unfortunately, we just lost our surrogate that we’ve had for over two years. And so now – now begins the process of finding a replacement surrogate which is hard during Covid because a lot of surrogates really don’t want to get pregnant during a time like this.”

Commodifying children and wiping out women

Sadly, this kind of dehumanizing language, where women are erased and children are treated as commodities, is hardly unusual in the fertility industry. Embryos — which are actual living human beings — are spoken of as if they are fish being sold at the market: fresh or frozen, high quality or low quality, leftovers or surplus. They are treated like produce at the grocery store, being weighed, assessed, and selected, when in fact, they are human beings with intrinsic value and worth.

The children are commodified even after they’ve been implanted into a woman’s uterus. If their purchasers decide there are “too many” children, even after willingly implanting multiple embryos, they’ll engage in selective reduction — a euphemism for choosing which children to kill in the womb.

This industry has led to even more shocking behaviors. Now trendy is embryo jewelry, created from IVF babies who are considered “leftover” by the families who created them. Still others dehumanize the children by treating them as property to be fought over or abandoned in divorce or custody agreements. Other parents have tried to engage in embryo trades so they can get children with the exact characteristics they want — all of which demonstrates that thanks to the dehumanization of the fertility industry, children are not people, but products.

Surrogacy is filled with ethical landmines for women as well. Most surrogates are low-income women, attracted to the idea of earning large amounts of money for something society sees as positive: carrying a child for someone else. The very notion of a wealthy person buying a poor person’s body for the purpose of creating children for them should be horrifying (a real-life “Handmaid’s Tale” scenario in the eyes of some), but the world largely looks the other way.

And it’s clear that the wealthy couples — like Bass and Turchin — do indeed view surrogacy as purchasing another person’s body for their own benefit. Parents can buy insurance just in case the woman they’re using doesn’t “perform” on demand. Then, if the surrogate is found to be carrying a child with a disability or of the wrong gender, or if they’re carrying multiples, parents feel entitled to try to force her to have an abortion, even against her will. Other surrogates have found themselves abandoned once they get pregnant, because the would-be parents changed their minds.

What about the children?

Though the process of IVF and surrogacy are treated as an act of supreme love, the children born often are all too aware that they are seen as products.

Them Before Us is a new movement dedicated to advocating for children’s rights above parents’ desires. One woman, named Ellie, wrote about how she hates knowing how she was conceived.

“I’m the child of a stranger, who altruistically sold me, his biological daughter, to a family he would never meet,” she said. “He signed away his rights to be a father to me, and my parents gladly bought the gift that would give them a child. They were ecstatically happy when my mother became pregnant, but no one considered how I would feel about the transaction that took place, how I would feel about having no right to a relationship with my biological father, no access to my paternal family, not even medical information.”

Another woman, Louise, spoke of the loss of her identity. “I am still struggling with the self-hatred which I nurtured all the years when I thought I was my social father’s daughter,” she said. “I could never be like he was, do things his way, and concluded that I was therefore useless. Particularly in my working life I have a near constant struggle with compulsive over-performance, and intense self-criticism. I have a near mortal fear of being wrong in the way I work, and I guess addressing this pattern is my biggest personal challenge at the moment.”

Anonymous Us is another group dedicated to the pain felt by people conceived through IVF. “This day turned out to be the worst day of my life,” one woman wrote of discovering the details of her conception. “I didn’t know who I was and I still don’t… My life now consists of constant struggles and fears. I look in the mirror and don’t know where I got my almond-shaped eyes, my pouty lower lip, my small ears… This is the hardest part: realizing I will never get my identity back.”

“I am a human being, yet I was conceived with a technique that had its origins in animal husbandry,” one person wrote in the Anonymous Us book. “Worst of all, farmers kept better records of their cattle’s genealogy than assisted reproductive clinics … how could the doctors, sworn to ‘first do no harm’ create a system where I now face the pain and loss of my own identity and heritage.”

Bass and Turchin are, sadly, far from alone in participating in the dehumanizing process of the fertility industry. It’s intrinsic; it’s born into the process. Women are treated as invisible, and the pain it causes children is treated as unimportant. Becoming a parent is no longer seen as a privilege and a responsibility but as something that is owed to anyone who wants it. And the broken bodies and minds left along the way are irrelevant in the eyes of such an industry, because what matters isn’t the product — it’s the purchaser.