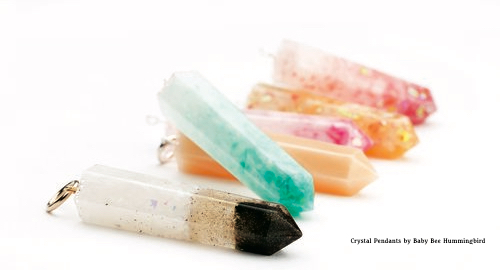 After six years of IVF, the Staffords had three children: four-year-old Lachlan, and 21-month-old twins Charlotte and William. But they still had seven remaining embryos, and they didn’t know what to do with them.

The answer? Turn the embryos into jewelry.

“After completing our family, we looked into the donation of our remaining embryos,” Belinda explained. “I wanted to keep having more babies but the emotional toll, plus financially it was too much. Donating our embryos wasn’t an option for us and I couldn’t justify the yearly storage fee. I’d heard others had planted them in the garden but we move a lot, so I couldn’t do this. I needed them with me.”

So she contacted Baby Bee Hummingbirds, an Australian company that took the remaining seven Stafford children, and turned them into a heart-shaped pendant after the tiny babies were cremated. Belinda seemed to be happy with her choice, despite claiming that she couldn’t bear the thought of “destroying” her children. “Finding this has brought me so much comfort and joy,” she said. “I finally at peace and my journey complete. My embryos were my babies – frozen in time. When we completed our family, it wasn’t in my heart to destroy them. Now they are forever with me in a beautiful keepsake.”

There’s just a little problem with this “keepsake”: as Belinda says herself: her embryos were her babies. She said it wasn’t in her heart to destroy them, but that’s exactly what she did. She robbed her children of the chance to finish growing and developing, and robbed them of a chance to live — all so that she could turn their remains into a necklace.

Sadly, the Staffords are not the only people to have done this. Baby Bee Hummingbirds claims to have made 50 jewelry pieces out of embryos since starting the business in 2014. “I don’t believe there is any other business in the world that creates jewellery from human embryos, and I firmly believe that we are pioneering the way in this sacred art, and opening the possibilities to families around the world,” owner Amy McGlade said.”Reactions from families who understand the journey are amazing and heartfelt. They are so grateful for our service. What a better way to celebrate your most treasured gift, your child, than through jewellery? It’s about the everlasting tangible keepsake of a loved one that you can have forever.”

But these are embryos — actual human beings — not possessions that can be turned into a keepsake on someone’s whim. It’s unbelievably cruel and distasteful. As McGlade said herself, this is a child, not a designer diamond. And what better way to celebrate the treasured gift? Well, the parents could choose to give the child their life. That would be a better way. Belinda Stafford said that she could not abide going through the IVF process again. Yet another option would be to donate the embryos to another infertile couple, giving her children the gift of life while also giving someone going through her same struggle the chance to be parents. Instead, she destroyed her children so she could make a pretty necklace out of their remains.

In many situations, IVF already turns children into products to be bought and sold, so really, embryo jewelry is just the next logical step. And why not? It’s not uncommon for parents to choose selective reduction of twins after undergoing IVF. Babies with Down syndrome are frequently aborted after IVF. Divorcing couples fight over who gets to own the “property” — the embryos — that outlasted the marriage or relationship, with actress Sofia Vergara being the most notable example. Television personality Sherri Shepherd notoriously abandoned her child after her marriage failed so she wouldn’t have to pay child support. There is also an IVF lottery in Britain, where people can “win” a baby.

All of these situations, including the embryo jewelry, share a common theme: these children are viewed as products, something that the parents own and can do with what they wish. It ultimately robs children of their inherent dignity and humanity, and why? Because embryos are small and dependent upon specific circumstances in order to grow and thrive? Scientifically, we know that embryos are human beings. They aren’t clumps of cells in petri dishes. They’re human beings who are frozen until keeping them in limbo is no longer convenient, and then they’re destroyed. Turning their remains into jewelry doesn’t change that fact.

Children are not possessions that we are owed when we want them, and which can be thrown away when they aren’t wanted. This jewelry is, in essence, removing life support from these embryos because their parents don’t want them, but they don’t want anyone else to have them (and give them life), either. And this is supposed to be praiseworthy?

Turning destroyed embryos into cheap jewelry isn’t a way to treasure children; it’s a way to exploit them and turn them into possessions. It robs them of their humanity and furthers the commodification of children. How low do we have to sink before people finally say enough?