According to reports, around 3,000 abortions take place every year in South Korea, even though it is illegal in the country. And, just as in the pre-Roe United States, those illegal abortions are committed largely by physicians. Now, the government is cracking down, calling abortion an “immoral medical action” and stating that the government will now impose penalties on doctors who break existing laws banning abortion. And a group of South Korean doctors — who have up to this time, been committing abortions illegally — are now refusing to commit them “in protest.” The Korea Herald reports that Kim Dong-suk, the head of the Korean College of Ob & Gyn, representing 2,000 OB-GYNs, said:

We apologize to the citizens, and especially (the women) who will be affected by our decision. But we want to make it clear that the Ministry of Health and Welfare is responsible for this situation, and other upcoming consequences, which we think are far from ideal.

Thus, the pro-abortion group is protesting any actual “teeth” to the law — by actually complying with the law. The Herald notes:

In an ironic twist, he said the members of the group are complying with the laws as a “way to resist” against the government’s decision. The doctors won’t be performing the procedure, which is in high demand, especially among vulnerable women, as a “form of protest” — or a strike — until the Health Ministry considers removing the new penalty on doctors.

The doctors were not the first to protest. The staunchly pro-abortion group, Women on Web, which illegally transmits abortion pills to women in areas where it is illegal, was part of a staged demonstration in South Korea soon after the law imposing penalties for illegal abortion was passed. The organization says:

On August 26th, 125 women swallowed the abortion pill in defiance of the restrictive abortion laws in South Korea…. The facebook [sic] post announcing the action and calling for mobilization was censored by Facebook and removed.

via Women’s Hope Center in Korea

Women on Web founder Rebecca Gomperts, a Dutch physician, said women “have the right to have an abortion with dignity, without being scared to be found out for doing something illegal,” adding that “social justice” can only be achieved if poor women, “homeless and undocumented women,” and women in abusive relationships can get abortions.

Gomperts says abortion should be legalized because women have the right to abortion. This is circular reasoning. But abortion has been illegal in South Korea since 1953, except “if the pregnant woman or her spouse suffers from an eugenic or hereditary mental or physical disease… a communicable disease…, if the pregnancy results from rape or incest or if continuation of the pregnancy is likely to jeopardize the mother’s health,” according to a United Nations document. If a woman aborts for any other reason, she is “subject to imprisonment for one year or a fine. The penalties for medical personnel are increased to imprisonment for up to two years.” Now, in addition, a doctor will have his or her medical license suspended.

READ: How many women really died from illegal abortion prior to Roe v. Wade?

Despite the pro-abortion rhetoric insisting that women must have abortion, one remarkable organization, the pro-life Women’s Hope Center, has taken awful situations and turned them around for women — without killing their pre-born babies. This pregnancy resource center — and more — is a shining light in the darkness of 3,000 illegal abortions a day. 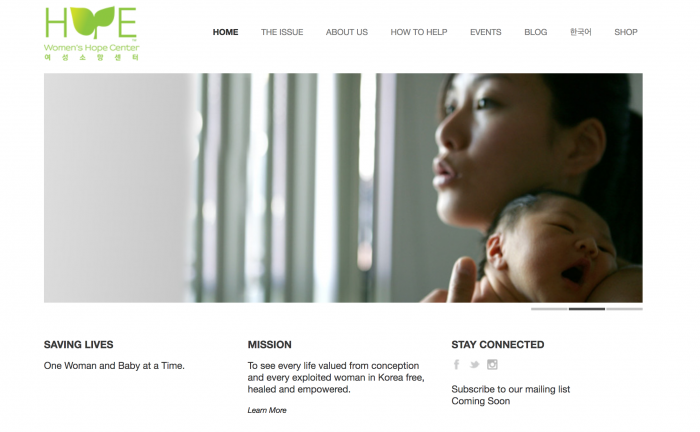 Even more remarkable than Women’s Hope Center’s lifesaving work is its focus on also rescuing and healing mothers in crisis. One way it does that is through its safe house, House of Hope. The site explains:

The House of Hope is a community of hidden apartments where survivors of sexual exploitation and threatened forced abortion, as well as those at high-risk (teen runaways, young unwed mothers), who need to be hidden for their safety, may receive on-site care and participate in a healing and restorative program. The apartments are designated as intensive care (those who have recently been rescued from the sex industry) or transitionary (those who are now safe and moving toward independence). Most of our clients arrive pregnant or with a baby in their arms.

It’s hard to reason that abortion is necessary for these women in crisis when there are other alternatives like this. Its Facebook feed is filled with stories of hope. In this culture of death, these South Koreans are thriving on promoting life.

Click the “CC” at the bottom middle-right of the screen for subtitles.

These doctors who are attempting to stage a noble protest on behalf of women are actually showing that governments establishing new rules of law can affect a culture. How many babies might be saved by this “protest”?