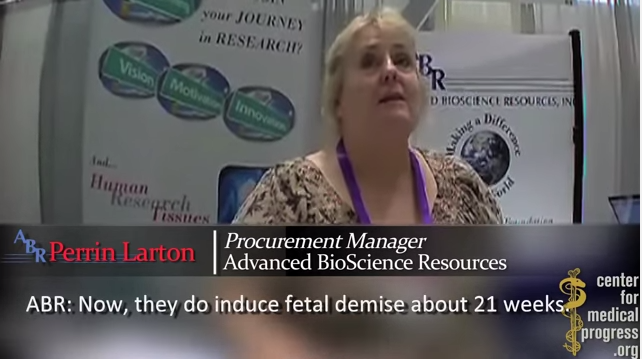 (RedState.com) The sickening series of videos from Center for Medical Progress continues apace.

Today we get a look at the regime of payments and kickbacks endemic in the baby parts marketplace and troubling questions are raised about outright murder.

First off, we get some new characters in this video. Perhaps the most significant one is Perrin Larton, the Procurement Manager for ABR (Advanced Bioscience Resources, which has zero web presence).

Kickbacks are part of the game.

An interesting sidelight to the videos is that StemExpress complains about the un-level playing field. They try to give money to the clinic (which would be illegal if the payment exceeds expenses) and are stymied by ABR, which apparently has invested in buying staff and board members at clinics (also a felony).

Cate Dyer, who used to work as a procurement technician for ABR before founding her own company StemExpress, shares some of the financial details of ABR: “They were funding places in Hawaii for themselves,” she divulges. “Some staff–not that I know so much on the Planned Parenthood side, but I wouldn’t be surprised–there are some staff in the past that have been on the payroll with ABR.” According to Dyer, ABR would pay an “advisor fee” to a clinic manager or director in order to preserve their exclusive right to harvest fetal tissue at that location. “There’s like, well enough known,” says Dyer, that “for a long time there were certain clinics that because they had paid advisors that were sitting on boards for these clinics, that were also an advisor to ABR, you were just never going to go anywhere with them, you know what I mean?”

Do they kill babies that have been delivered?

Via transcript from HotAir

“The whole point is not to have a live birth,” Larton says. “Unless it’s somebody who has had six pregnancies and six vaginal deliveries.” The undercover investigator asks, “And then it just pops out?” “Yeah,” Lartonreplies, “they put lams in and she comes in the next morning, and I literally have had women come in, and they’ll go into the OR, and they’re back out it in three minutes. And I’m going, ‘What’s going on?’ ‘Oh yeah, the fetus was already in the vaginal canal. Whenever we put her in the stirrups, it just fell out.’”

If the baby “just fell out,” it would seem that means a live-birth, which as Larton says, misses the whole point of having an abortion. The implication is clear, that the attending abortionist killed a baby that was very much alive and very much outside the mother. The technical term for that is ‘murder.’ Criminality aside, what Larton is describing is a clear violation of the Born Alive Infants Protection Act of 2002. While this bill is toothless (we only had a GOP president, House, and Senate, at the time so there wasn’t much anyone could do to make it stronger) in that it carries no criminal sanctions itself, violating it would result in a hospital or other non-profit having its tax exempt status revoked.

The videos are showing conclusively what kind of a monstrous industry we have created by legalizing abortion and Congress should act to limit this ghoulish business as soon as possible.

(Editor’s Note: This article was first published at RedState on September 1, 2015, and is reprinted here with permission.)