An abortion conglomerate in the news due to a recent, controversial protest — which resulted in several pro-life individuals being charged under the draconian federal “Freedom of Access to Clinic Entrances Act (F.A.C.E.)” — is now under fire for another reason.

EMW Women’s Surgical abortion facility used to commit abortions at two locations. One in Louisville (the site of the protests) and a second location in Lexington. Media reports indicate that the Lexington site closed earlier this year after state inspectors found questionable conditions at the facility.

A report written by the Lexington Herald in June of 2016 indicates that when inspectors visited on the Lexington facility on February 17 that year, “they reported that employees told them the clinic only performed abortions” and they found “dirty conditions and expired medicine.”

A patient at EMW described in an interview with Louisville Magazine her abortion experience at the facility. According to the anonymous, 27-year-old student, she was taken to the basement of the facility, where she and a group of other women were lined up like cattle, with little privacy or dignity.

The student said that she was six weeks pregnant when she was instructed by her gynecologist to go to EMW for the procedure. “If you go, there are two doctors; one is a female and a colleague of mine and she’ll take care of you,” the student was told.

EMW is owned by Ernest Marshall, M.D., according to a January 2017 lawsuit located online. His wife, Ona Marshall, is listed as vice president and Anne Ahola is shown as the secretary, according to corporate records filed with the state. Despite the fact that EMW once admitted to an undercover Live Action investigator that “most doctors don’t want to do [abortion],” the lawsuit states that two physicians – Ashlee Bergin and Tanya Franklin – perform the abortions.

The patient described employees of EMW as professional, describing one staffer working “behind a glass window frame” as possibly “Russian.” She also described being led into a small room where they “do the ultrasound.”

When asked by the interviewer what her preborn baby looked like, she replied, “a dot?” 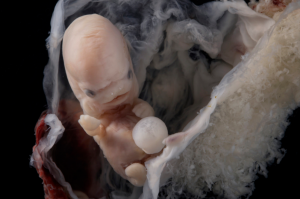 Tragically, women who seek abortion do not receive information on the humanity of the preborn child from the businesses earning a profit from abortion. EMW is no different.

Testimony in the January 2017 lawsuit against EMW’s owner claims:

In other words, any information about the preborn child is denied to a woman who visits the business for an abortion.

Instead, a woman considering abortion would need to search online to find information like what is featured at Live Action News, describing the preborn human being as “the miracle and beauty of human life.” In doing so, she would see that her preborn child looks nothing like a simple “dot.” 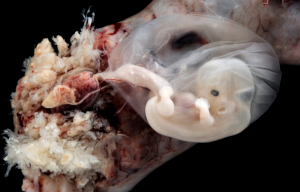 The abortion facility, for its part, explains the woman’s ultrasound away, noting in a lawsuit against the state:

Rather than “trusting women” to make a decision based upon fact, EMW claimed in court that showing a woman the truth of the development of her baby would “send a message of disapproval” about abortion:

By forcing a physician to display the ultrasound images to a patient, even over her objection, to provide a detailed description of the embryo or fetus, regardless of whether she wants to hear it, and to auscultate the heart tones, the State is using the physician to send a clear message of disapproval to the physician’s patient.

If the preborn child is nothing more than a ‘clump of cells’ (as we are told by abortion proponents), then how could simply presenting the biological facts about the child’s current development and allowing the woman to hear the heartbeat send a message of disapproval? Could the problem really be that revealing this information also reveals the truth — that the child in the womb is, indeed, a living human?

In 2008, an undercover Live Action investigator documented the way EMW discourages girls from viewing ultrasounds because “it just may make the decision harder… when she sees what the fetus looks like at this point”:

In the piece from Louisville Magazine, the abortion patient said she was told by staff that she was not allowed to have a loved one present during her abortion, because the abortion facility did not want “anybody here that influences your decision.” (No one, that is, except the profit-making abortion facility staff.)

The woman also stated that she was given “two options” – a medical or a surgical abortion. She chose the surgical procedure because, she felt she “didn’t want to swallow a foreign object and put chemicals into my body.”

“You can potentially bleed for two weeks and it’s not even guaranteed that the pill would abort,” she said. “I wanted to be 100 percent sure that the abortion would be successful. ”

The anonymous patient seemed rather put off by the lack of privacy at EMW, describing how she was lumped into a group of additional patients who did not talk to one another:

The patient from EMW goes on to describe her abortion experience as shameful, telling the interviewer that, “Aesthetically, it shames you. It’s cold… It sucks. The whole process — leading up to it, during.” Perhaps the patient expected her abortion experience to be more spa-like and comfortable? After all, women are sold the idea that abortion is an ’empowering’ experience. This woman found out it’s quite the opposite.

The anonymous patient, who suggested that abortion facilities remind women how abortion is “institutional shame,” also described the way the EMW staffers brought the girls down an elevator into the basement to do the abortions, where a nurse strongly advised they get anesthesia for the pain:

You take an elevator to the basement. That’s where the surgery is done. You’re given a robe and go into a room where there are all of these stretchers. Seven of them lined up. Then one by one, depending on if you take the anesthesia, they will administer that. I ended up doing that. I spoke with a nurse and she told me about some girls who didn’t take the anesthesia and said it hurt, it really hurt.

Still, despite having the abortion months prior, the woman, who appeared adamant that she made the right choice for her, admitted that she still thinks about her abortion. “I still think about it. I still think, “Oh, I’d be eight months pregnant,” or — you know? All the time.”

Editor’s Note: If you have had an abortion and are struggling with regret, or if you are considering an abortion, visit this link for more information and help.