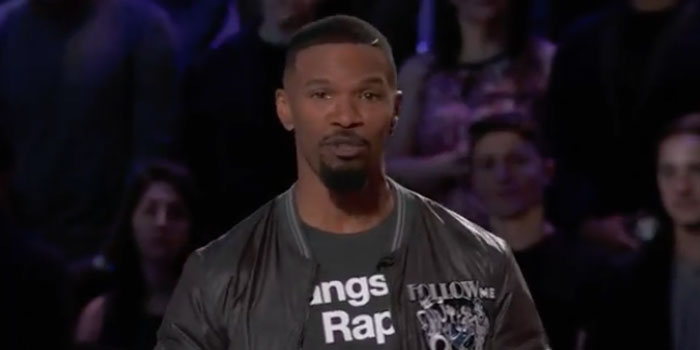 (Save the Storks) Last month on the Fox gameshow, “Beat Shazam,” host Jamie Foxx had an emotional moment as he reflected on the impact adoption has had on his life.

Contestants Donna and Avery were on the show hoping to win money to put in a college fund for Donna’s daughters who were adopted from Haiti following the 2010 earthquakes.

One of her adopted daughters was present at the show and received a huge applause from the audience.

Touching his heart, Foxx shared his own adoption story saying, “You know what’s amazing? I was adopted at seven months and I’m going to tell you what that means. My grandmother? That’s not actually my biological grandmother. That’s somebody who said, ‘I see something in that little boy that’s very special.’”

He continued, “And she made sure I had every tool that I needed to grow and expand…” At which point he started crying and literally had to walk off the stage.

He explained he had to get himself together and that he doesn’t like getting emotional on camera. However, he went on, saying, “But what you don’t understand is that when you’re a kid you just want to be loved. My grandmother loved me and thank you for loving that little girl over there and loving all your children.”

Foxx gave Donna a big hug and thanks her for “playing [the game] for other people.”

It’s not every day life is celebrated in our culture, but when it is, we need to rejoice. In a society that values “choice” over human lives, it’s so important to highlight stories of adoption and redemption.

The more we show women adoption is a viable option, the less women will feel the need to resort to abortion.

Editor’s Note: This article was originally published by Save the Storks and is reprinted here with permission. If you have questions about pregnancy or abortion, click here.