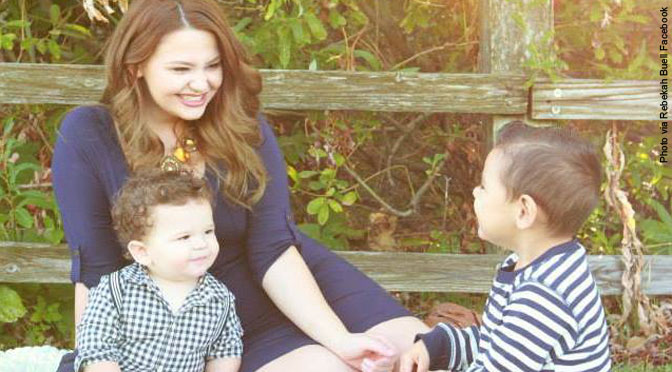 On April 19 Rebekah Buell stood before California’s State Assembly to defend AB 2134, a bill stating that all abortion clinics providing the abortion pill RU486 must also inform their clients of the pill’s reversal alternative.

While still a 17-year-old high school student, Buell became pregnant with her first child. Determined not to become a stereotypical teenage mother, she managed to graduate early, get accepted into Sacramento State University and marry the father of her child.

Soon after her marriage, however, Buell realized she was in an unhealthy and potentially dangerous relationship.

“I was about halfway through my freshman year of college and my marriage was very physically and verbally abusive. I knew I needed to leave,” Buell said. “Right as I began the divorce process I found out I was pregnant again.”

This news was the culmination of Buell’s fears.  “I was living with my parents,” Buell said. “My dad had said, we`ve done a lot for you with your first pregnancy, but if you get pregnant again, we will have to force you and your son to leave.”

For the sake of her son, Elias, Buell began to consider her options.

“I really thought that having another baby would hurt my son’s life. I’d be losing my family’s support,” Buell said. “There goes my house, staying in college, and my son’s medical insurance. I was about five weeks along. I thought I had to have an abortion. I grew up in a Christian home but I justified my decision by thinking God would forgive me.”

After finding a clinic, Buell went in for a consultation.

“I was just under six weeks pregnant and was dead set on starting the chemical abortion that day,” Buell said. “I’m on the table and the tech comes in. I’d had a kid before and my ob-gyn showed me the ultrasound. I’m waiting for her to flip the screen. It was so strange to me that she wouldn’t let me see the monitor!”

A Fee for a Look at Her Baby

Buell caught a glimpse of the ultrasound print out and asked if she could keep it, but was informed she would have to write a letter to the clinic’s director and pay a $35 fee. After becoming increasingly frustrated, Buell decided to switch to a Planned Parenthood facility in Sacramento.

At this consultation, Planned Parenthood staff told Buell that although she was now seven weeks pregnant, they weren’t seeing a heartbeat and didn’t know whether it was a viable pregnancy. Because they were unable to draw blood, Buell was forced to return a week later.

By this time, she was already eight weeks pregnant.

“I’m holding the abortion pill in a cup and we’re talking about it. I kept thinking, chemical abortions are supposed to be less invasive and less painful. My concern was that it would be easy to hide since I was living with my parents.”

Deciding she had no other option, Buell took the pill and was sent on her way.

It was a decision she instantly regretted.

Step One of Abortion Pill Taken. Too Late?

While still sitting in the parking lot of Planned Parenthood, Buell googled options for reversing the abortion pill. After a seemingly fruitless search, she stumbled across AbortionPillReversal.com.

On the site was a number, 1-877-558-0333, for women having second thoughts about taking the abortion pill. Although she felt ashamed to speak to anyone pro-life, Buell summoned the courage to dial the number.

“A nurse explained to me that a medical journal about a reversal-protocol had been recently released, which called for progesterone injections being put back into your body. She then told me I still had a chance of saving the baby.”

Buell was referred to a doctor a few hours away who was willing to give the injections a try.

“The doctor was hopeful, but it wasn’t 100 percent,” Buell said. “He immediately started injections as well as suppositories until I hit about 13 or 14 weeks.”

A Birthday and a Memorial

Only after the process to save her baby had begun did Buell realize that her second child would have been aborted on her oldest son’s birthday.

Meanwhile, Buell’s family rallied to her in a way she never dared to hope. Her parents stood with her in the decision to keep her child.

“I found out that my mom is post-abortive,” Buell said. “She aborted three babies herself. When she found out what was happening, she was really sad and scared for the health of my baby.”

Because she was unable to drive hours away to get the injections twice a week, her sister, a medical assistant, would arrive in the early hours of the morning before work to give Buell her injections.

Meanwhile, Buell was receiving frantic phone calls from Planned Parenthood wondering why she had not returned to her follow-up appointment to ensure the abortion had been completed.

Eventually she returned Planned Parenthood’s call to inform them of her decision to keep her child. She was told not only was her attempt to save her child pointless, but that if the baby lived, he would be severely deformed and she would put her own life at risk in the process. Seven months later, Buell gave birth to a perfectly healthy baby boy. Now, over two years later, Buell is a senior at a private Christian college, studying professional writing and theology. After her near abortion, she has become a pro-life speaker and advocate.

As her family has grown, the Abortion Pill Reversal network has gained traction across the country. Buell’s experience was an early example of what has now become over 200 babies rescued from abortion since the life-saving process was first pioneered in 2012.

Today, over 300 physicians in the United States are equipped to reverse the effects of mifepristone under certain circumstances. With South Dakota Gov. Dennis Daugaard (R) signing a law April 29, there are now thee states—Arizona and Arkansas are the others—that require abortion facilities to inform women of Abortion Pill Reversal.

Standing before California’s State Assembly on April 19, Buell had her 2-year-old son, Zechariah, by her side—a living testament to the viability of abortion reversal. On the opposite side of the case stood representatives from Planned Parenthood and NARAL.

Although AB 2134 failed in committee, Abortion Pill Reversal’s advocates are compiling new research to demonstrate the lives the process has saved.

Buell said she plans on continuing to advocate for the pro-life cause even after she graduates.

“For now I want to continue speaking and informing people. There are so many people who are under-informed or misinformed,” Buell said. “Down the line I’d like to get into life-affirming politics and lobbying on behalf of the [pregnancy] centers. Planned Parenthood and NARAL have lobbyists and the centers don’t. We need more people to step up and say, ‘It’s not easy, but having a kid and being successful is possible.’”