Prayers for a country untouched by the culture of death (so far).

The Irish Constitution currently holds a protection for the unborn from the moment of conception. But the Irish government is now working to DISMANTLE this protection and legalize abortion in Ireland.

The Irish government’s extreme abortion bill would legalize abortion through all nine months of pregnancy, when a woman’s life is seen as being in danger – including the risk of suicide. The Irish people want a vote on this CONTENTIOUS (?) issue, but the government has refused and is now on a power trip to legalize this brutal practice in Ireland, a country that has been untouched by the culture of death.

But the people will not be silent, and they continue to rise up and fight for the protection of every human life.

This past Saturday, over 60,000 people from across Ireland flooded the streets of Dublin, to stand up against the government and to call for the protection of the unborn child to be upheld.

Ireland’s leading pro-life organizations – Youth Defence, the Life Institute, and Precious Life – organized this rally in response to the Irish government’s push for abortion legalization and to call on the Prime Minister Enda Kenny to give the people a vote.

Dr. Eoghan de Faoite of Youth Defence said the Rally Committee was “absolutely delighted with the huge turnout” and that “there was huge momentum building to let the people vote on the Bill using Article 27 of the Irish Constitution.”

He exclaimed, “What is Prime Minister Enda Kenny afraid of? Let the people vote!” 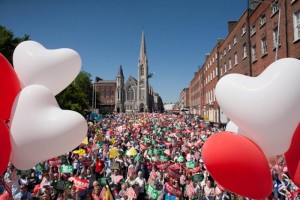 The 60,000 people brought Dublin to a standstill and forced the public to pay attention to the intense battle that Ireland is in the midst of, as they work to keep the unborn child protected under the law.

Director of The Life Institute Niamh Ui Bhriain, addressed the rally, saying, “The pro-life ethos of Ireland has made this country the safest place in the world for a woman to carry a baby.” And this is according to the often quite pro-abortion United Nations and the World Health Organization.

She went on: “Article 6 of the Constitution puts these matters in the hands of the people. We demand the right to vote!” Then the crowd erupted in cheers and began chanting, “Let us vote! Let. Us. Vote!”

Bernie Smyth of Precious Life also spoke to the rally, saying, “This is the greatest human rights battle of our day. And it is also the greatest spiritual battle of our day!” She went on, “We must raise up a banner of prayer across the nation. We are a people that will not accept a bill that allows our children to be killed. We must storm heaven at this time. We need a revolution in prayer.” 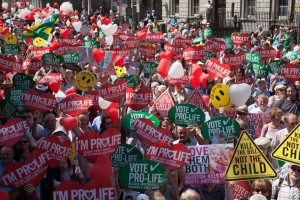 “It’s not over… until we say… it’s over!” Smyth exclaimed. And the crowd went wild.

The battle for life in Ireland is far from over. But the Irish pro-life movement is on fire, and its members are more passionate and determined than ever to uphold the protection of the unborn child.

The Irish government is currently debating the bill and should have a final decision over the coming days. This brutal abortion bill would legalize abortion through all nine months of pregnancy, when a woman’s life is seen as being in danger – including risk of suicide.

Please continue to pray for Ireland, that the pro-life movement stays strong in this battle to protect life and that the government votes against this vicious abortion legislation.