Since 2010, 21 Planned Parenthood facilities have closed in Iowa, according to a press release provided via email by Life Right Action, a pro-life grassroots education and lobbying organization in the state. One of those facilities, located in Sioux City, closed in 2017, following the state’s decision to prevent state Medicaid money from going to abortion facilities. The Sioux City location’s closure brought the total of abortion centers in the state down to eight.

Unfortunately, the business reopened this summer. A local news station, quoting a Planned Parenthood North Central states press release, states that the reopening was due to dramatic increases in sexually transmitted infections in the region. But besides STI testing and treatment, Planned Parenthood’s provided services include abortion. Multiple news channels reporting on the reopening back in June noted that abortion pills would be offered at the Sioux City location, and Life Right Action’s press release stated that the facility is offering telemedicine, a.k.a. webcam abortions.

However, as of October 12th, Planned Parenthood Sioux City’s website only listed “pre- and post-abortion patient education, post-abortion follow-up exams, and referrals for other abortion services, as needed” under its Abortion link.

READ: In two years, Iowa has become one of the most pro-life states in the nation 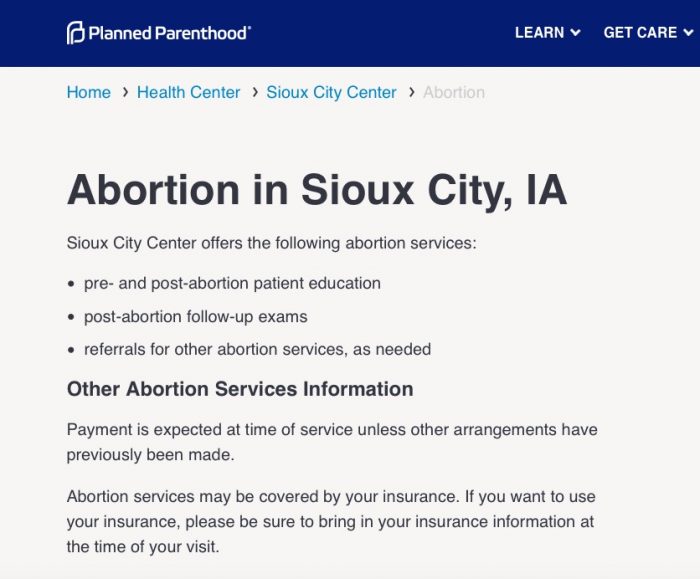 Furthermore, under the Abortion Referrals link, it merely reads “This health center doesn’t provide abortion services — but we can help you. Call us for a referral list of health care providers in your area that offer abortion services.”

Clicking through the “Book Online” feature with information for an imaginary client — a 20-year-old with a last menstrual period of 8/17/2020 (eight weeks pregnant) who wants the abortion pill — provides referrals to Planned Parenthood facilities in the cities of Council Bluffs and Ames. It is curious that Sioux City does not list abortion services as available at that site, despite multiple articles stating that this was the plan.

Iowa has long been considered a pro-life state. In June, Live Action News reported that Iowa’s legislature had passed an amendment to the state’s constitution to ensure that women provide informed consent when they procure abortions. Life Right Action’s press release on the Sioux City facility’s reopening noted a positive trend in Iowa abortion numbers. “A few years ago we reported to you that Iowa abortion rates have been plummeting over the past decade! Digging into the 2018 abortion numbers, the most recently published statistics, we found this newsworthy trend continues. In 2017 there were 3,269 reported abortions. 2,848 abortions took place in 2018. (2019 rates will be released later this year.)”