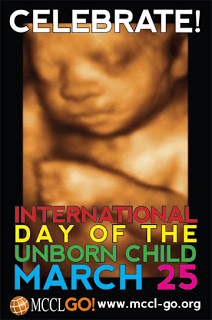 The day was established by Pope John Paul II to coincide with the Feast of Annunciation. Minnesota Citizens Concerned for Life has a great post about this day.

As the post from MCCL mentions, despite the celebrations occurring throughout the world, to be an unborn child in the United States now is extremely dangerous. This country is wonderful in so many ways, yet it has some of the least restrictive laws on abortion in the world. Our country is being led by the most pro-abortion president we’ve ever had. It seems unlikely that President Obama will be doing much to truly celebrate the unborn child.

Cecile Richards, President and CEO of Planned Parenthood, a group whom Obama is certainly close with, said that “it’s not safe to be a woman” in many states. I would agree – that is, if you are a woman not yet born. Cecile Richards will certainly not do much to celebrate the unborn child, either – not when her organization performs as well as advocates for abortions.

The unborn child should be celebrated every day, yet, sadly, such a group of vulnerable, innocent, and defenseless humans are often disregarded and die a painful and tortured death through abortion.

Wouldn’t it be amazing if on March 25, to celebrate the unborn child, there were no abortions? AbortionNo.org lists the estimate that there are approximately 115,000 abortions in world each day. That’s 115,000 human beings who would not have to die – not today.

Though we celebrate unborn children who may very well be legally killed in our own country, let us remember them even if nobody else will, even if they are killed. For the unborn can do so very much. And while some children may undoubtedly be killed before they even have the chance to be born, there are also those who will survive and make it to birth. There will even be some who were almost aborted but whose mothers ultimately did choose life. Let us celebrate their lives as well, and look forward to seeing what they are capable of during the lives they are given on Earth.

On every day, but especially on this day, let us truly celebrate the unborn child. Let us remember all of them, protect them, and love them.