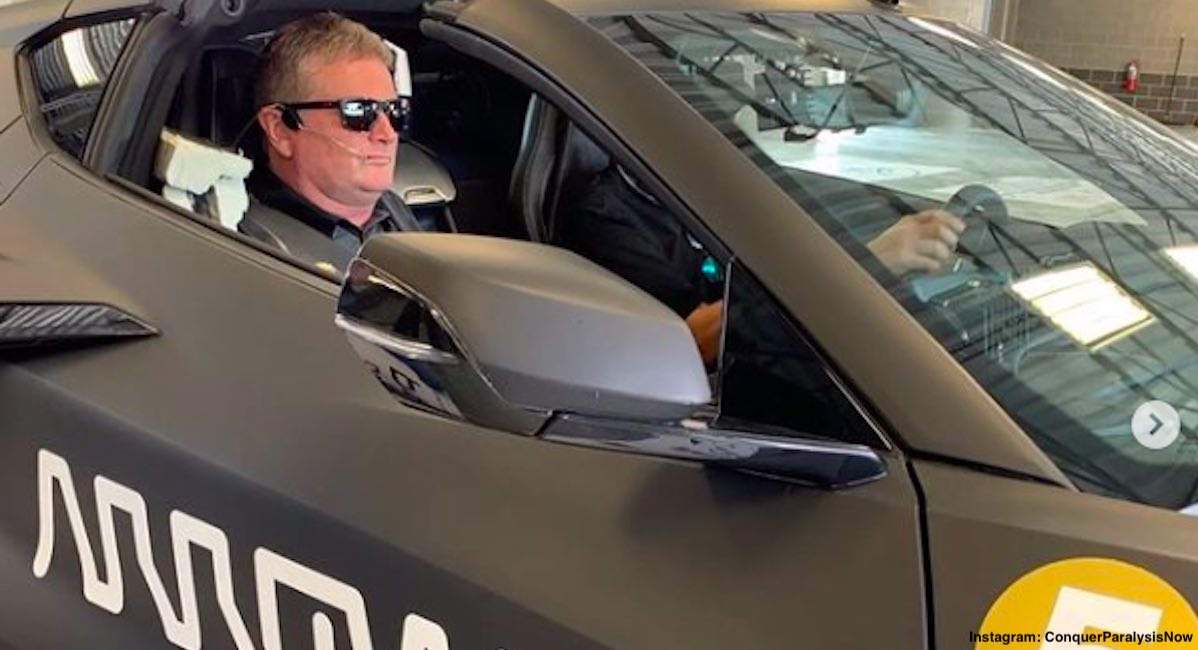 Sam Schmidt was an IndyCar driver in the prime of his racing career when a terrible accident left him without the use of his arms or legs. According to a recent People.com article, “On Jan. 6, 2000, Schmidt was taking part in a test session for the Indy Racing League at Walt Disney World Speedway when he ‘hit the wall’ in a violent collision, leaving him a quadriplegic (paralyzed from the shoulders down).”

As is often the case with traumatic brain injury or traumatic spinal cord injury patients, Schmidt’s medical team immediately prepared his family for the worst. Schmidt told People, “[The doctors] didn’t give me much of a chance to make it through the night, let alone the weekend.”

When Schmidt survived the initial injury, his wife was told to “put him in a nursing home because he’ll never get off the ventilator.” She refused, and three weeks into his stay at a St. Louis rehabilitation facility he was off the ventilator.

READ: People with disabilities do ‘live boldly’ — and they’re not better off dead

In those first weeks and months, Schmidt found motivation in his children — but he also found it in his own father, who years earlier when Schmidt was just 11, had also suffered paralysis from his own racing accident. Schmidt described his father as his “inspiration” and “hero.” After significant rehab, Schmidt’s father was able to regain use of his legs and one arm. Schmidt himself remains to this day a quadriplegic.

Amidst his own rehabilitation, Schmidt founded Conquer Paralysis Now, an organization with the goal of finding a cure for paralysis. It now serves as “a leading authority on spinal cord injury research and treatment” in the United States and internationally.

While funding research was the original emphasis for the first 15 years of CPN’s existence, Schmidt said that “a couple of years ago, it just kind of hit me that the reason I have lived longer than I was [supposed to] was mainly because of the physical routine that I keep up. And there really wasn’t anything in Las Vegas doing anything collaborative or state-of-the-art rehabilitation. So at the end of 2017, we decided to create the DRIVEN Rehabilitation NeuroRecovery Center.” State-of-the-art adaptive equipment for individuals living with paralysis isn’t the only highlight of the program. Schmidt noted that additionally, “We address the psychological aspect of your situation because I think that’s just so critical that you have that reason to get up every morning.”

Schmidt and CPN have partnered with Disabled American Veterans (DAV) and vaping company Vuse to “offer and fund mobility solutions along with future vehicle donations for disabled vets across the country.” Schmidt said, “… If a disabled veteran wants to go on with his life and do something special, we’re going to help them do that.” Schmidt is personally committed to developing adaptive vans for disabled drivers, using principles from the adaptive Chevrolet Corvette racing car he drives.

Schmidt’s inspiring story is a testament to the resiliency in the human heart, the necessity of a community of supporters, and the ingenuity of mankind. Every person’s life has the potential to inspire others when love and support are provided.