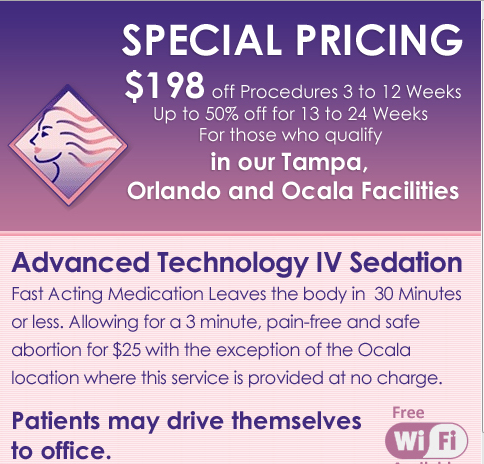 James Pendergraft IV. It’s a name that many pro-lifers have become familiar with as it appears and reappears in the news and reports of malpractice and unlawful behavior, which have led to no fewer than five license revocations for the Orlando-based abortionist.

His abortion practices, which include late-term abortions of fully-developed children, have been compared to those of the third-world. They have backfired a number of times, one of which led to a $36.7 million civil medical malpractice judgment over a wildly botched late-term abortion in which the child-victim was born alive and maimed. Pendergraft has reportedly refused to pay the judgment.

The latest “What the heck?” incident at Pendergraft’s practice occurred when the Orlando Women’s Center released a coupon for abortion services (above). To market the coupon, a video (below) was also released, which consists of a monotonous guitar melody and slideshow of pretty women’s faces, and at one point in the “commercial” the URL for the coupon appears. When the commercial ends, the music cuts off awkwardly, and the viewer is left wondering what that was all about.

A few notes on the coupon: The first coupon is for redemption on Sundays only, and offers free deep IV sedation, or a discount on advanced IV sedation (the latter does not require an escort, which, incidentally, is misspelled on the coupon). The coupons are good for abortion services only, and cannot be redeemed for any other services, visits, or contraception.

Even with the coupon, Pendergraft’s abortions are not cheap. As a late-term abortionist, his practices can involve much more advanced pregnancies and larger babies than most, and his fees can run north of $7,500.