Two theaters in Canada have reportedly cancelled their showings of “Unplanned” due to employees receiving “personal threats” and being told to “watch their backs.”

Salmar Cinemas in Salmon Arm, British Columbia, and Movie Mill in Lethbridge have allegedly been the target of death threats for showings of the movie “Unplanned,” the story of Abby Johnson’s conversion from director of a local Planned Parenthood to pro-life activist and celebrity. The movie had been scheduled for a five-day run starting July 12th.

The personal information of managers had been shared on social media as a result of the theater announcing the showing of the movie, leading to “threats to watch their backs,” according to screen shots apparently showing a text conversation between theater management and a reporter. Management also received “personal threats” against their families. Police are investigating the threats, Life Site News reports. 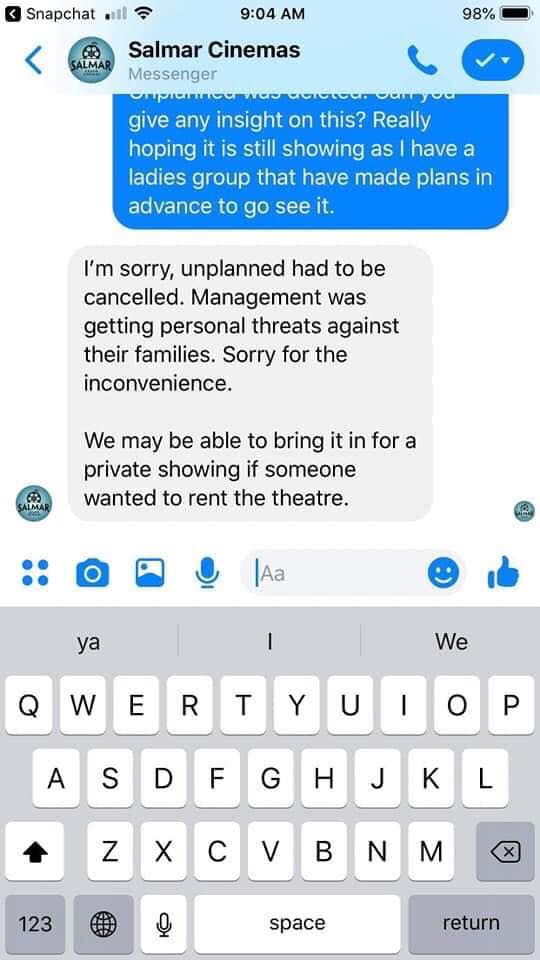 According to BJ McKelvie, pastor and president of Cinedicom, the film’s Canadian distributor, threats and protests started well prior to the release of the movie. “Some groups are saying that they’ll protest, and there’s a lot of people that will support,” he said to CTV News. “We have one company that’s come under intense scrutiny, so he’s going to have security there. It’s The Movie Mill in Lethbridge, Alta. It’s been unfortunate that he’s had a lot of threats, a lot of emails.”

McKelvie noted that the threats were aimed at smaller, independent theaters since the major movie chains in Canada who carry the movie weren’t moved by the threats: “They didn’t get anywhere with Cineplex, or they didn’t get anywhere with Landmark,” he told Life Site News. Life Site says, “McKelvie confirmed to LifeSiteNews that two Canadian independent cinema owners contacted police after receiving death threats they perceived as credible, and that they are ‘fearful for their families.'” (Live Action News has yet to corroborate these claims of death threats and has updated this article to reflect this information.)

The theater which canceled the movie showings, Salmar Cinemas, is no stranger to controversy. However, the cinema has not previously experienced these kinds of harassment and threats of violence. “We have a track record of showing things from a variety of points of view… we try not to preclude things because of whatever personal opinions may exist on our board or something like that,” Chris Papworth of Salmar Community Association said to Kelowna Capital News. “What’s different here… certainly in the past, there hasn’t been an effort to dox employees or, specifically, the general manager, by releasing their personal information on social media and then encouraging people to go after them as the one responsible for some heinous act. We just aren’t prepared for those levels of hostility towards our general manager.”

The movie’s run in Canada almost didn’t happen in the first place, and the movie faced a near ban in advertising. Canada’s largest movie chain refused to pick up the movie, citing “content,” before an effective boycott campaign with over 5,000 signatures, and a successful private screening in Edmonton. Thanks to pro-life support, the movie was picked up and will be screened in 10 to 20 theatres starting July 12.

Since Unplanned’s release in March, the movie has gone on to become one of the most successful independent films of 2019, taking in $18 million at the US box office, more than three times the movie’s budget.

Editor’s Note, 7/8: A previous version of this article quoted Life Site News in stating that “death threats” were made. This has not yet been confirmed for Live Action News.