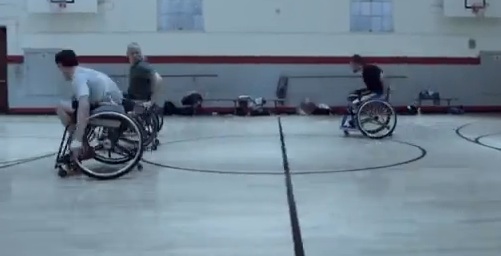 A new advertisement for Guinness beer is making the rounds because of its shockingly different content. Typical beer ads feature pretty girls, sports, or hilarious man-humor (who doesn’t love Bud Light’s ‘Real Men of Genius‘?). But Guinness has taken its advertising to a new level with an ad that is as man-oriented as it is inspiring and thought-provoking. Take a look.

The one-minute commercial features a group of guy friends –all in wheelchairs– gathered for a competitive and adrenaline-charged game of basketball. The game is aggressive, and no one seems deterred by the precarious possibilities of collisions or falling over (both of which happen during the game). The purpose of the commercial at first seems to convey the message that this kind of dedication is what true athleticism is all about. But that’s not all the advertisement portrays.

It’s clear towards the end that these guys are champs. They’re dedicated and fearless. The last few seconds reveal an unexpected twist. As all of the men except one rise up out of their wheelchairs and effortlessly walk away together, the viewer learns that these are also some of the most committed friends a man could ask for: only one of them is really wheelchair-bound, but that’s no impediment to his team. The commercial closes with a scene of the men enjoying Guinness at a bar after the game as a narrative voice concludes: The choices we make reveal the true nature of our character. Nothing could be truer.