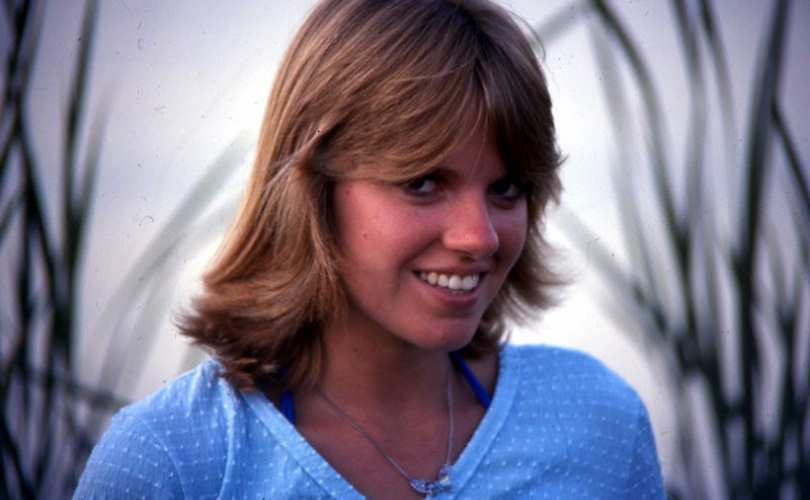 It’s hard to know where to start with my story — I guess from the beginning.  I was conceived when my mom was raped by an encyclopedia salesman who forced his way into my mom’s mobile home, while my three-year-old brother was asleep. He raped her, and then left. She was in shock and didn’t know what to do. She was on assistance and had a wonderful social worker, but was afraid to even tell her.

Approximately two weeks later, he returned around 11:30 at night. He knocked and knocked, but my mom froze. He proceeded to break in and she thought he would rape her again. She told him that he wasn’t going to do that again – that he would have to kill her first. They struggled over lights, and she was able to grab a hold of a phone and call the Police Department. Incredibly, the Police told her that they couldn’t help her because she had to call the Sherriff since her home was out of the city limits.

The rapist grabbed her by the neck and started choking her. When she was slinking to the floor and no longer screaming, he suddenly ran out. Shortly after that, the Sherriff did come, took her statement and looked at her neck. They said they didn’t see any marks, then told her there was nothing they could do!

She said she felt ashamed and alone. She did contact her social worker, who instructed my mom to go to the hospital and get checked out, so she did.

A couple of weeks following, a Sherriff came to the office where my mom worked and spoke to her again regarding what had happened.  She said she sensed that he did not believe her.  But the following week, she got a call to come to the Police station to make an identity in a lineup. The rapist was picked up on a drunken driving charge.  And yes, he was in the lineup. The Police took his statement – shockingly, it was identical to hers! He confessed the whole thing.

My mom found out that she had become pregnant with me from this rape, and he was ordered to pay $10.00 a week in a Court Proceeding – until I was 18 years old. She was later told that his family paid the weekly support, so as to not suffer more embarrassment to the family.

My mom’s social worker later informed her that the rapist was under suspicion, but not charged at that time, with a rape/murder of another girl prior to raping my mom, so my mom and I are both lucky to be alive. She was also later told by her social worker that the rapist was in and out of the mental institution as a result of psychological trauma from his military service.

So that’s the story of my rape conception. Mom and I did later in life talk about abortion and she said it was never a consideration. She did, however, follow it up with saying “I always did want a girl — good thing I was a girl.” That kind of took me aback.

There is one thing I want to make clear: I love my Mom with all my heart. I know it wasn’t easy making the decision to have me and to keep me. She had a very hard childhood. She had an abusive father who drank heavily, and lost her mother to an illness when she was only 14. Most of the memories my mother had for her own mom was of her being sick. So my mother didn’t really have anyone to teach her things about life experiences.

My mom made mistakes and as would be understandable, she didn’t make good choices in men. I was still a baby when she met a man twice her age – 32 years older than her who made her feel safe and took away some of the loneliness she had. He drank heavily and sure didn’t like me at all. He wanted his own little girl and I guess I wasn’t good enough. Later, he got his wish and got his little girl — my sister whom I loved so much.

So growing up, my brother loved my step-father, and so did my sister, but I felt like the black sheep all the time. Mom was afraid for me to be alone with him, so I had to stay hidden while she was at work. On one occasion when I was a baby, my mom found him choking me until I had turned blue. He eventually died of a heart attack, and our adoption was finalized two weeks later. I was forced to take his name, which was another embarrassment for me.

When I was about six years old, I found out that I was conceived in rape. What six-year-old knows what rape is? My cousin and her friends were talking about me, but they didn’t know I was under the table playing. All I heard was that I came from rape and that the rapist got off by pleading insanity. I ran to the bathroom and locked myself in. I cried so hard thinking I must be tainted and really stupid, and that people are just being nice to me. I know that sounds ridiculous now, but it hurt so bad at the time. It was all I could reason for the way people made me feel.

My aunt came home and I let her in. She hugged me and told me it’s ok and that one day my mom would tell me more when I get older. All through school, I didn’t know how to say why I didn’t have a father. That was in the 60’s and it just wasn’t that normal. My mom had to work early in the morning in a factory and no one helped me get dressed or fed me. One teacher would hide me behind the easel to give me toast and orange juice. I had no friends and I didn’t know how to socialize, so I played with myself. I made up friends at home and, most the time, I played like I was a teacher and everyone wanted to be my friend.

As I grew into a teenager, I wanted to know more, but I didn’t know how to tell mom that I already knew. I was afraid she would be mad at me. Mom and I started fighting a lot. I did get to go to church, and I learned at a very early age that Jesus loves me always, no matter what, and that God was watching over me. He gave me special people along the way when I needed them most. I have never lost my faith; it was the only thing good in my life.

The one thing I really dreamed about was having a wonderful man who would love me – really love me, and who would be my best friend. One day when I was 11, I met this young man and I just knew he was to be mine. How could this be, he was so cool and I was so young and plain? I prayed for him to be mine every day. I kept a diary and told all the silly things I did to get his attention. Finally one day, when I was 14 and he was 17, Paul walked 22 miles in the hot country sun to my house to ask me to “go steady” with him.

I told him right away about my conception – that I never had a father and my mother was raped, and he never ever had a problem with it. He says it only made him love me more. God gave me a wonderful man and not just any man, but the one of my dreams! He also gave me two wonderful sons who have made us proud parents. It was July 3rd 1973 that we started our life together, and with ups and downs like normal, we are still in love with each other and are best friends. We dated for five years and have been married since 1978!

Even still, I fight moments of feeling insignificant. I sometimes wonder if things would be different for me if mom had given me away to a loving family. But in the end, I am who I am and God wants me to do my best in life and show compassion to those who need it when I can.

When I think about it, I feel like I am so lucky to have been given life, even though it wasn’t easy and happy all the time. I know that I have to make my life count – to make God proud of me for giving me a chance at life.

I know my mom went through hard times too for me and she endured a lot of pain and loneliness. I am glad to have my mother and to have known her all these years. She couldn’t give me the nurturing I really needed growing up because she didn’t know how and it just felt uncomfortable – I get that. But I know she loves me and that is all I need. I just have to work on loving me every day. One wish I have would be that people would not look down on people like me because of how we were conceived, and that still affects me.

I never knew the man who raped my mother or his family. It sounds like he was a pretty bad man, but I am a blessing and should be treated so. I feel like pieces are missing in my life and I wish people knew how it hurts so bad sometimes because you can’t tell what causes you to be sad sometimes. But my mom always tells me, “Chin up!” When I’m feeling down. And I know it’s hard to be down if you have your chin up!

Editor’s Note:  Cindy Lambert is a wife, mother, jewelry designer/crafter, and pro-life blogger for and member of Save The 1. This was first published at LifeSiteNews on March 24, 2015, and is reprinted here with permission.