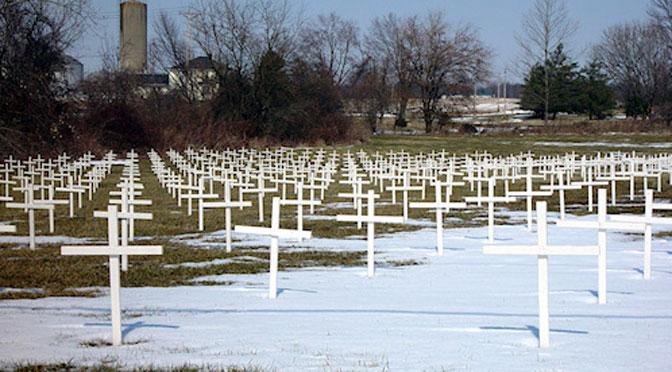 It’s hardly breaking news that abortion is a humungous blind spot for many who picture themselves champions of a more compassionate, enlightened society, but rarely is that blind spot as starkly demonstrated as it is in a recent Huffington Post column. In it, North Carolina pastor and blogger John Pavlovitz chastises Christians for peddling what he calls the “myth of America’s moral decay”:

This idea of our country’s present moral decay has become a go-to Evangelical Christian trope for decades; an attempt at a literal self-fulfilling prophecy, where the world is falling hopelessly apart and the Church is the lone, faithful remnant standing in the face of the heathen culture’s rebellion. Much like Noah, these religious people imagine themselves sole builders of the only safe place from God’s coming wrath; the waters of dread surely and swiftly rising.

But the truth is America is not in decline any more than at any time in its history. This is just lazy religious-speak that seeks to paint the picture of everything being terrible so it can name drop the “Last Days” and leverage the ensuing fear such language invariably creates in suggestible God-fearing folk.

He sarcastically asks if people with a pessimistic view of the culture are really pining for a return to the days of slavery, segregation, fewer women’s rights, and other social ills, then argues that we’re simply seeing greater coverage for the same old ills rather than brand new ones.

That may certainly be the case for some individuals, and of course it’s good to temper our expectations with more long-term views of history and the failings of human nature that will always be with us. However, especially for someone purporting to look at it from a Christian perspective, it’s more than a little suspicious that Pavlovitz’s diagnosis of society doesn’t once mention legalized abortion-on-demand.

It is not only legal for a mother to have her own son or daughter killed effectively at nearly any point before birth for any reason, but our elected representatives are judicially forbidden from directly protecting those children. Roughly half the country believes this slaughter is legitimate, and even the political party officially opposed to abortion often lacks the outrage to fight back. Our news and entertainment media celebrates prenatal murder. Teaching the plain facts about abortion’s victims is considered controversial. Not even the revealing of Planned Parenthood’s gruesome felonies against children was enough to form a clear consensus against the organization’s legitimacy.

Isn’t this state of affairs a pretty conclusive indicator that, in at least one major way, our culture objectively has decayed substantially from where it was before 1973? Pavlovitz says “there have always been people who will do horrible, despicable things,” which is true…but it’s most certainly not true that doing those horrible, despicable things to children always received the law’s blessing and society’s tolerance, let alone celebration.

So how can a pastor completely overlook such an egregious, widespread devaluing of the most innocent and helpless members of the society he’s evaluating?

Whatever the reason, it isn’t the first time—Pavlovitz also believes that Barack Obama’s presidency—y’know, the guy so aggressively committed to killing babies that he opposes basic medical care for newborns who survive abortions but wants to force nuns to pay for abortifacient drugs—“ quietly, consistently crafted a platform and a legacy that reflect Christ far more than those across the aisle like or will ever admit to,” and “has let his life be his testimony” by “champion[ing] justice, equality and the inherent dignity of all people in a way that closely mirrors the stated mission of Christ; certainly as much as any politician on either side can claim” (again, no mention of abortion).

A search of his website shows abortion references to be few and far between, while what’s there shows little appreciation for the practice’s severity. Pavlovitz sneers that “When a Christian on the opposite side of an issue, (like guns, or gays, or abortion, or the environment), calls you “too political”, they are invariably confessing to you, that the issue itself, has become their religion,” as if heeding God’s declarations against the shedding of innocent blood is making one’s faith “secondary to their politics.” He lectures that “right or wrong,” hatred of abortion is “the one overplayed song they hear our choir singing” to the exclusion of issues like poverty, racism, healthcare, and global warming (but pro-lifers are the ones politicizing our faith?).

To be fair, he also notes that “some will openly lament the government-sanctioned killing of incarcerated criminals and endlessly petition for mercy, while showing far less regard for such humanity before it makes its way fully through the birth canal” and asks if abortion “condition[s] young people to be more cavalier with regard to the unborn and to their reverence for life at its fundamental level”…but soon follows it up with the old smear that pro-lifers “cherish life in the womb or once it reaches Heaven, but in so many ways disregard it in between.”

Then again, recognizing the violence of abortion makes it all the more bizarre that he omits it from his critique of his fellow Christians. It’s one thing for the ten thousandth pro-abortion “Christian” propagandist to disregard it, but how does someone who at least hints that he knows better simply conclude that we’re simply “reckless,” “irresponsible,” and “perpetuat[ing] the narrative of an ever-deteriorating Humanity to ratchet-up urgency and to galvanize the shrinking faithful into movement”? How does he just ignore the largest manifestation of the decay we’re talking about?

The truth is that none of us deny there is still tremendous good in the world, or reasons to be hopeful that we’ll overcome the sins we face. Of course there are things about the past that were worse, and the future will be another mix of problems and solutions. But it is not shortsightedness or hysteria to observe that some of the particulars are worse, that we have yet to adequately fight back against it, or that it will take a long time to wash the blood of fifty million children off of society’s hands.