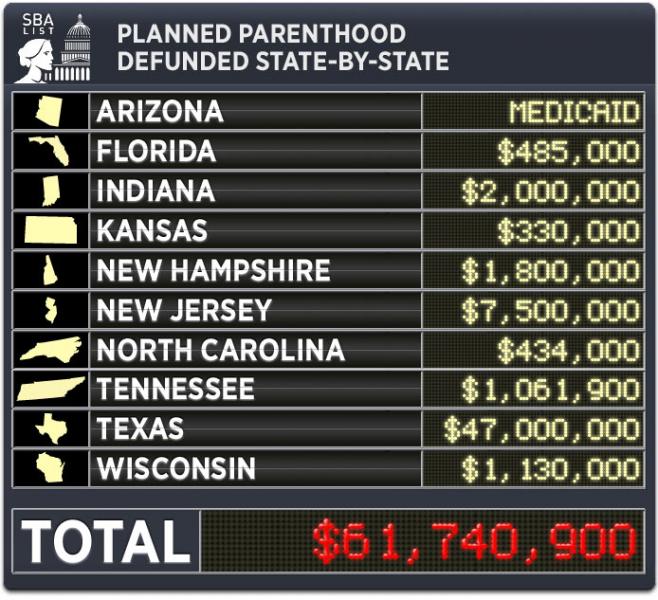 No organization responsible for the deaths of millions – including babies and women – deserves our hard-earned money. Not in any amount.

Susan B. Anthony List is one of the groups spearheading the fight to defund Planned Parenthood.

Susan B. Anthony List grassroots activists are on the front lines in the battle to defund America’s abortion giant — Planned Parenthood. Our efforts during the federal budget fight gave Planned Parenthood a black eye and exposed the truth: it is a business centered around abortion, and a willing ally of those that wish to harm young girls in the sex trafficking business. 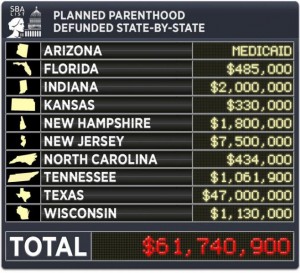 For instance, Oklahoma (who will begin to defund $154,000 from Planned Parenthood at the beginning of 2013) prefers to direct needy women and children to other facilities – some as close as three miles from the Planned Parenthood centers – that do not also refer for abortions. Planned Parenthood’s performance issues and excessive cost also weighed into the state’s decision.

The state also de-funded the abortion company because Planned Parenthood’s cost per participant exceeded those of legitimate centers.

Arizona, when it defunded Planned Parenthood, did not cut money from women’s health programs. Instead, the state chose to protect the taxpayers’ interests and direct their money to organizations that care for women without killing their children. SBA List President Marjorie Dannenfelser explained (emphasis mine):

Arizona is leading the charge to protect women and young girls by prioritizing taxpayer funding for entities that provide comprehensive health care, not abortion…. The Whole Woman’s Health Funding Priority Act does not cut a single penny of funding, but rather recognizes that women deserve whole-woman care, not abortion.

Ohio is currently in the process of voting to defund Planned Parenthood in the amount of $1.7 million. A House committee has approved the defunding, but the vote must now pass the whole House. The Guardian reports:

In a press release from Ohio Right To Life, which backed the bill, [president Michael] Gonidakis said: ‘It can’t be ignored that Planned Parenthood is one of the largest pigs at the taxpayer trough, yet fails to provide certain and basic healthcare services offered at most of the other 300 clinics. It’s time to stand up against the special interests, abortion lobbyists and their allies and instead support poor and uninsured women and their kids.’

The stated purpose of House Bill 298 is to ‘prioritise’ funding, including federal funds, for family planning purposes. It calls for eligible public entities or other community health groups that help uninsured and underinsured women to receive money from the state departments of Health and Job and Family Services before other providers like Planned Parenthood.