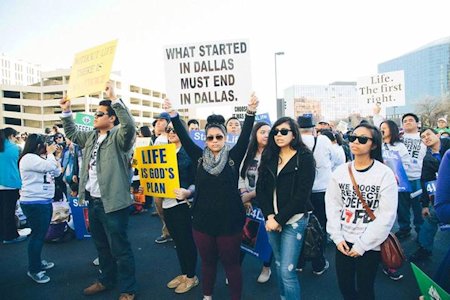 Since the 1973 Supreme Court ruling on Roe v. Wade, more than 56 million lives have been snuffed out in America. That’s more people than the population of Texas, and it’s nine times the number of people who were killed during the Jewish Holocaust.

But every year during the third week of January, millions of Americans from all races, creeds, and socioeconomic and religious backgrounds come together in cities across the nation to stand up for the unborn and remind the world that abortion is the moral injustice of our day. 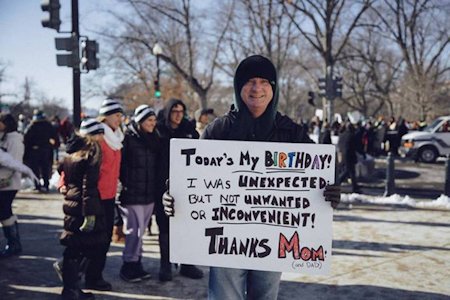 As a pro-life outreach organization driven by compassion for both the unborn and for women facing crisis pregnancies, Online for Life participated in this year’s life marches to show love and grace while proclaiming the truth about abortion and life.

Despite the snow and near-zero temperatures, thousands gathered in Washington, D.C. to make the annual trek up the National Mall to the Supreme Court Building. Arguably America’s largest life march, the National March for Life headlined some leading pro-life advocates, including Jeanne Monahan, president of March for Life; Giovanna Romero of Latinas por la Vida; Nicole Peck of Silent No More; youth speaker Molly Anne Dutton (Auburn University student); and many more. Online for Life was there, marching alongside staff members from several pregnancy resource centers that work with us. 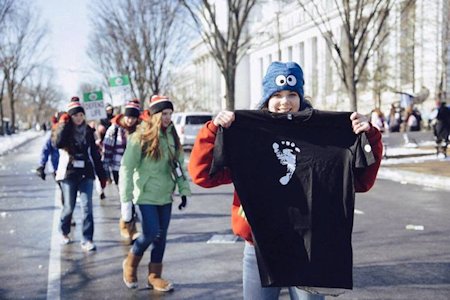 Here’s a firsthand account from Kristin Read, marketing coordinator at Online for Life, who marched in Washington:

It was such an eye-opening experience to walk through the streets of Washington D.C. in unity with hundreds of thousands of other pro-lifers from across the nation—from every race, age, religion, and belief system imaginable. And we all stood united for one thing: LIFE. There were no riots or slander (to my knowledge), but a peaceful uprising of a united pro-life generation that will not be silent about the lives our nation is losing each day. Together, we marched in peaceful unity . . . Together, we will put an end to abortion in our nation.

One thousand miles away in Dallas, Texas, the city where Roe v. Wade was first argued, another March for Life took place. Donned in pro-life blue and holding placards promoting life, thousands of activists marched to the Earle Cabell Federal Building, where they were rallied by speeches from Dallas’s most influential religious leaders. Despite the nearly nonexistent media coverage that this march garners, the Dallas March for Life continues to grow each year. It now boasts over 10,000 participants. Carrying the Online for Life banner promoting their recently launched Prayer App, the Online for Life team marched shoulder to shoulder with women and men from all walks of life for the sake of the unborn. 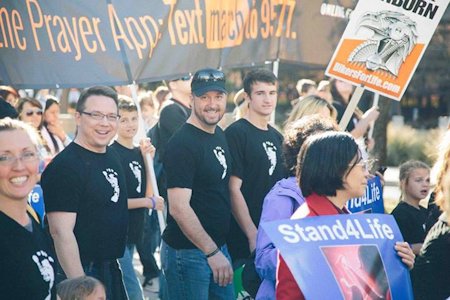 Brian Fisher, co-founder and president of Online for Life, describes the experience:

It was an honor to march in Dallas with thousands of others to show our support for unborn children and their families. To be marching and standing next to the courthouse where Roe v. Wade started in Dallas was both motivating and haunting. We have much work to do.

Joining Fisher at the Dallas March for Life was Jeff Bradford, vice president of development at Online for Life. With his wife and three of his four children by his side, Bradford was impressed by how many people made the march a family event:

It was a blessing to be a part of the largest ever Dallas March for Life. For me, it was a family event. My oldest son, my two younger children, and my wife all marched together. As a father and husband, I could not have been more proud to have my family stand with me for life. No matter the stage of development, how big or small, rich or poor . . . as for me and my family, we believe all life is valuable!

Likewise, Sean Martin, Online for Life’s director of partner services, attended the event with four of his nine children, many of whom are adopted and have special needs:

It is important for me, as someone who is pro-life, to not only say that I am, but do something. The march is a small thing, but I believe it is important to stand with others and be encouraged by the fact that tens of thousands of people in Dallas believe what I believe. As a father, I want my children to know how important this life is and to understand that the pro-life view is not some fringe view, as it is often portrayed, but a view held by many—if not a majority—of people in this country.

One week later in San Francisco, an estimated 60,000 activists marched in the West Coast Walk for Life, making this the largest West Coast march to date! As expected, this march – which takes place deep in the heart of San Francisco – drew opposition from abortion supporters that was significantly more intense than what was experienced in the other two cities. 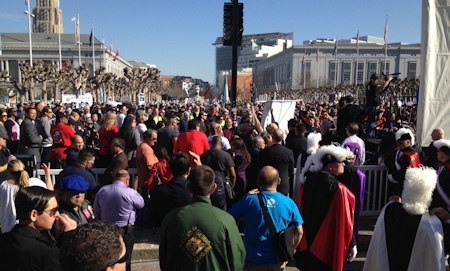 John Blandford, the head of Online for Life partnerships and a California resident, had this to say about his experience:

Being a part of the West Coast Walk for Life was exhilarating. Even I was surprised to see 60,000 pro-lifers in San Francisco! Although we faced fierce opposition as we marched through Union Square and pro-abortion activists mocked and ridiculed us, we only became more fortified in our cause. It’s clear that this is a spiritual battle. Let’s keep praying for those who are blind and lost.

Online for Life is a nonprofit organization committed to rescuing children and families from abortion. While the majority of their effort is focused on providing tangible, practical help to women and men facing crisis pregnancies, they also strive to support pro-life activists, as evidenced by their involvement in this year’s marches. Ben Matthews, Online for Life vice president of central services, summarizes the unique synergy this way:

It is an honor and a privilege to be part of the march as we strive to save the lives of these children and meet the needs of the mothers and families. Taking a stand at the March for Life is symbolic of our commitment to life every day of the year. 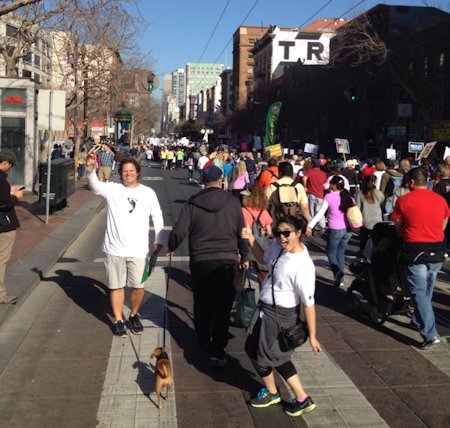