Today, Representative Trent Franks (R-Ariz.) held a hearing on H.R. 1797, the Pain-Capable Unborn Child Protection Act, originally for D.C. but now intended for the entire nation. On the “pro” side of the congressional divide were Reps. Franks, King (R-Iowa), Chabot (R-Ohio), and Gohmert (R-Tex.); the “anti” side comprised Reps. Nadler (D-NY), sporting a suspiciously large soft drink, and Conyers (D-Mich.), who divided his time among forgetting the number of the bill he had presented himself to oppose (H.R. 1793?), plugging ObamaCare, and sleeping. 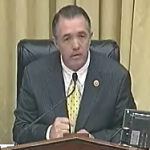 Four witnesses testified – three for the bill, one against. The three in favor – Dr. Anthony Levatino, a reformed abortionist; Dr. Maureen Condic, a neurobiologist; and Jill Stanek, a nurse – presented unimpeachable testimony as to the “universal agreement” (per Condic) that a pre-born child does indeed feel pain at 20 weeks. Their testimonies are worth examining in detail, but I want to focus on the fourth witness: Ms. Christy Zink, a mother who aborted one of her three children.

Zink testified that she had received in 2009 “terrible news” about her son, at that point twenty-one weeks along – that he was, “in effect[,] missing one side of his brain,” and that he would live a life of “near-constant pain” should he be born. Zink followed her doctor’s advice and ended the boy’s life in utero. She said her abortion was “made out of love,” “to spare my son’s pain and suffering,” and that she was testifying “on his behalf.” H.R. 1797 is “downright cruel,” Zink said, because it would “inflict pain” on everyone who is not the pre-born child in question.

Now, Ms. Zink is characteristic of the sort of witness pro-abortion politicians like Reps. Nadler and Conyers like to bring to these hearings. She is not a doctor, let alone an abortion doctor, like Anthony Levatino, who can describe exactly what happens to the child during an abortion because he’s performed over 1,200 of them. She is not a neurobiologist, like Maureen Condic, who can lay out the parts of the human brain that respond to pain and explain how even “congenitally decorticate” children – i.e., children missing up to 80% of their brains – nevertheless respond to pain stimuli. (The specific young girl Condic mentioned, who was notably allowed to be born, also likes to dance to rock music.) She is not a registered nurse, like Jill Stanek, who cradled born-alive infants rather than leave them to die per her hospital’s orders.

Considering the overwhelming relevant expertise of these witnesses, one has to ask: why on Earth would Conyers and Nadler see fit to have Zink testify alongside them?

The answer, in short, is because she is political gold. Though not an expert in the relevant subject matter, she is a mother of three (two still living) with a sad story. Pro-aborts like Nadler and Conyers play emotional chicken using a woman like Ms. Zink: her story is the currency with which they gamble, and they dare Rep. Franks and the others to question it.

Often, people in Franks’s position under these circumstances blink; it’s hard not to. But not this time. 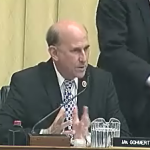 People from both sides of the room told their own stories; Levatino mentioned his daughter, the loss of whom convinced him to abandon committing abortions. Rep. Franks spoke of his brother, who lived a full life of forty years with Down syndrome. And Rep. Gohmert described his daughter, born premature, struggling to see and to breathe, on the verge of death. He quoted the NICU doctor: “It is so important that the baby hear your voice. Please talk to your baby, and caress her. Talk to her. Her eyes don’t work real well; she won’t recognize you. But she will know your voice, because she’s heard you in utero.”

“Ms. Zink,” Gohmert concluded, “having my great sympathy and empathy both, I still come back wondering: shouldn’t we wait, and see if the child can survive, before we decide to rip him apart?”

Pro-aborts like NARAL and Planned Parenthood will likely shriek that it’s cruel to call Zink’s testimony into question. But by treating Ms. Zink as a witness at a hearing instead of a pathetic pity-case, Franks, Gohmert, and the rest gave her the highest possible respect. That’s what she was there for – and Nadler and Conyers knew it going in.

Conyers, in a rare moment of wakefulness, declared Ms. Zink’s story “uncomfortable.” (He said no such thing in response to Stanek’s story, or that of Levatino, whom he called “Dr. Levantano.”) Rep. Gohmert, getting back on topic, asked Levatino how Conyers’s discomfort might compare to that of the child torn apart in the womb. Conyers desperately tried to sidetrack Levatino with a digression on ObamaCare – “Let me put it this way: can you just say you don’t like it?” Levatino, getting back on topic, bluntly demanded the relevance of the question. (Answer: thirty seconds of stuttering.)

The Republican representatives who matched Ms. Zink’s heartfelt pro-abortion story with their own pro-life ones were not cruel. The expert witnesses who used scientific evidence and medical experience to dismiss Ms. Zink’s personal testimony as irrelevant were not cruel.

No, what’s cruel is the rank cynicism with which abortion-peddling Democrat politicians like Nadler and Conyers prop up people like Ms. Zink. She got to be told, again and again, to her face, via both indisputable scientific evidence and powerful personal stories to match her own, that she made the wrong decision. For no reason, save as a crass appeal to emotion, Nadler and Conyers put this woman in a position to be reminded, over and over, that her son did live a life of “near-constant pain,” albeit a much shorter one – and this by her choice.

After the hearing, NARAL tweeted their thanks to Reps. Nadler and Conyers. Pro-choice champion Nadler poisonously suggested in his opening remarks that pro-lifers were “gleeful” about the Kermit Gosnell case. (He agitatedly recanted his remark only after Rep. Franks called him out on it.) He then spent the rest of the hearing sucking his soft drink or lazily propping his face up with his hand. Pro-choice champion Conyers slept through one half of the hearing and spent the other ignoring the witnesses (three of whom were women) to chat with his neighbors, or else stammer through the fallout from his torturous attempts at gotcha questions.

Maybe Jerrold Nadler doesn’t know the astronomical abortion rate in his city, but I suspect he does. Maybe John Conyers has slept through every declaration of how abortion has wrought havoc on the black community, but I suspect not. These are NARAL’s crusaders for women – querulous, desultory old men who prop up a wounded woman and then sleep or snack through her testimony, expecting their pro-life opponents – because they are gentlemen – to abandon their fight for the very lives of innocent children so as to prevent Ms. Zink’s feeling worse than she does already.

A federal twenty-week ban on abortion is a step in the right direction, and I commend Rep. Franks for taking it. But even better is the congressman’s resolve to speak for the voiceless among us, regardless of the depths to which his opponents will sink, and regardless of the human collateral damage those opponents are willing to accrue to keep their sacred cow mooing.

As for Reps. Nadler and Conyers, they are a disgrace and an embarrassment. Nadler may whinge about the “war on women” – this ridiculous phrase was one of the first out of his mouth – but anyone who would leave a woman like Ms. Zink twisting as these two have would be better-served keeping his mouth shut when it comes to defending the fairer sex.