When parents are told that their preborn child has Trisomy 18, the diagnosis is often followed up with the words: “incompatible with life.” But as a team of doctors at Children’s Hospital and Medical Center in Omaha is proving, children with the condition can live and thrive when doctors treat them as equal human beings.

“If you look at the old textbooks, and a lot of them are still being used, the outcome is death,” explained Dr. Meaghann Shaw Weaver, division chief of Palliative Care in an interview with Children’s. “It was one of the few diagnoses that was named lethal.”

Because it was considered “lethal” for so long and still is by many, most doctors automatically write-off preborn children with Trisomy 18 and consider them as good as dead, often advising parents to abort. For Meredith Willard, mom of one-year-old Rose, even meeting with the comfort care team to discuss her baby’s birth wasn’t allowed by the doctors in their home state of California.

READ: Compatible with life: Man with Trisomy 18 celebrates 18th birthday against all odds

Rose was diagnosed with Trisomy 18 at 12 weeks gestation. Trisomy 18 can cause congenital heart defects, physical and mental developmental delays, and feeding and breathing problems. Doctors said Rose wouldn’t survive. For choosing life for their daughter, Willard says they were called “cruel” and told they had to “let this child go.”

“I said, ‘There’s a heartbeat and she’s here, let’s let her be,'” explained Willard. “When I said I wasn’t going to terminate, there really was no more help for me there. I went weeks with no one.”

Finally, a doctor advised them that they should speak to a heart surgeon because he felt that their baby would live through pregnancy and birth, but would need heart surgery. 50 percent of children with the condition have a ventricular septal defect (VSD or hole in the heart) while the rest have defects that can be fixed with the right surgery. None of the heart surgeons in California would operate — strictly because Rose has Trisomy 18.

“You’re angry, but it fuels you,” said Willard. “You know that kids are treated. We just wanted that for our kid.”

That’s when they learned of Children’s Hospital in Omaha, 1,500 miles away, from a support group called SOFT – Support Organization for Trisomy 18, 13 and Related Disorders. Doctors there agreed to operate on Rose. And while it was a big deal to the family, for Dr. James Hammel, division chief of Cardiothoracic Surgery, it was just another day at work.

“If a family didn’t want surgery for an infant with VSD or tetralogy or even pulmonary atresia, we would take them to court, take the child out of the family and take care of them,” explained Dr. Hammel. Yet for children with Trisomy 18, it’s considered “cruel” to perform surgery despite the fact that without care they die, and with care they can live for much longer than originally thought. Seventy to 80 percent of babies with Trisomy 18 survive heart surgery, and 50 percent will still be alive 16 years later, according to Dr. Hammel. Others say the rate of survival is as high as 90 percent.

In the video below, Dr. Hammel gives a fascinating and instructive web lecture on heart surgeries for children with Trisomies 13 and 18:

“Most physicians view this as a hopeless diagnosis – but there is always hope,” he said. “Yes, these kids have functional limitations, but there is plenty of room to make their life better…. I’ve always said if I can improve a child’s chance of survival from five percent to 10 percent, I’m perfectly happy to take that on if that’s what the parents want to do.”

Thanks to the dedication of Dr. Hammel and his colleagues, families from across the country are self-referring to Children’s Hospital. The team at Children’s aims to treat the whole child and the whole family. They say that the medical treatments they provide for these children would be “absolutely obligatory for a child without trisomy” but other hospitals refuse to do them simply because of the trisomy diagnosis.

“Going to Omaha, we were treated the most normal you could be treated with such a medically fragile child,” said Williard. “It was like nothing fazed them, nothing scared them. They’re like, ‘No worries – we’ve got this, Mom. Go get a coffee.”

Rose was born with multiple heart defects and suffered from apnea, which is the cessation of breathing. After surgery, the apnea stopped.

“At the hospital we were at, they kept telling me, ‘She has Tri-18; her body is not meant to survive.’ I said, ‘It’s because of her heart.’ When Dr. Hammel repaired her heart, she never had one more episode of apnea. We flew home commerical with her on no oxygen… and I was told this child could never live outside the hospital.” 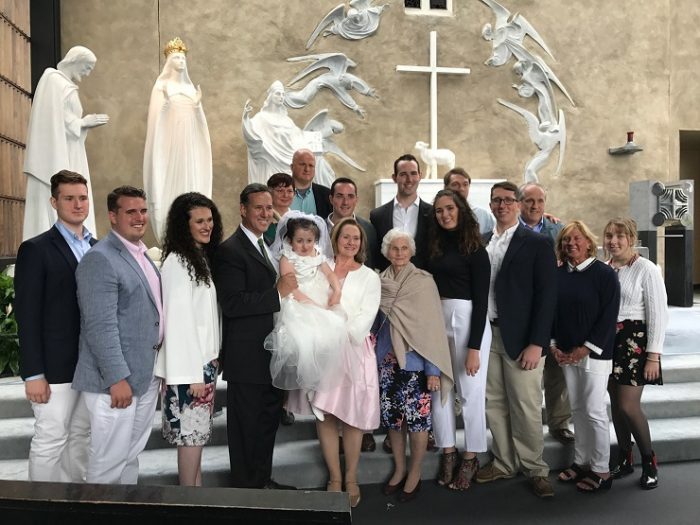 Doctors said Rick Santorum’s daughter Bella, who has Trisomy 18, was incompatible with life. She is proving them wrong.

Rose still has health concerns. She uses a feeding tube to get proper nutrition, she takes two heart medications as well as medication to help stop seizures, and she sees multiple specialists. But her life with her parents and four older brothers is a happy one.

“I’m super excited to see what she can do and explore and experience,” said Willard. “I was told this kid wasn’t a survivor. I knew she was.”

Terra Spiehs-Garst, Nebraska’s state chairwoman for SOFT, has a now seven-year-old son named Emerson who has Trisomy 18. Spiehs-Garst and her husband Tyson Garst learned Emerson had Trisomy 18 when Terra was 17 weeks pregnant. Doctors advised abortion. The couple told Live Well Nebraska that they wanted Emerson to be in control. He had heart problems that were able to be controlled with medication; now, he no longer needs them. He had surgery on his jaw, which helped his breathing improve. He underwent treatment for kidney cancer at 15 months old and is still tumor-free. He uses a communication device to talk to his family, and he loves dancing and hugs from his three brothers.

Dr. Hammel notes that there are other hospitals in the United States that do provide care for children with Trisomy 18, but they aren’t the established multidisciplinary team that exists at Children’s. Thanks to social media, more and more families are learning about the program at Children’s and are able to properly care for their children with Trisomy 18. Dr. Hammel is happy to provide this crucial care to families.

“In the end,” he said, “we will be judged by how we treat the most vulnerable people in our society.”

Thanks to the doctors at Childen’s, vulnerable children with Trisomy 18 are being treated as equal and whole human beings worthy of life.