Hormonal birth control may put women at a greater risk for depression, according to recent research published recently in the Journal of the American Medical Association (JAMA). Researchers from the University of Illinois at Chicago examined the risk of depression as an adverse side effect for various medicines. The study sought to answer the question, “How frequently do US adults use prescription medications with depression as a potential adverse effect and is use of these medications associated with concurrent depression?” The answers were troubling.

The study observed 26,192 adults 2005 to 2014. Researchers discovered “the estimated overall prevalence of US adults using medications with depression as a potential adverse effect was 37.2%.” They concluded that “[u]se of prescription medications that have depression as a potential adverse effect was common and associated with greater likelihood of concurrent depression.” Researchers observed more than 200 commonly used prescription drugs. In addition to hormonal birth control, depression or suicide are listed as potential side effects on varying blood pressure and heart medications, painkillers, and even antacids. And about a third of Americans are taking these risky medications, the study notes.

“Many may be surprised to learn that their medications, despite having nothing to do with mood or anxiety or any other condition normally associated with depression, can increase their risk of experiencing depressive symptoms, and may lead to a depression diagnosis,” said lead author Dima Qato, assistant professor of pharmacy systems, outcomes and policy at the University of Illinois at Chicago.

The report was released one week after US health authorities said suicides have risen 30 percent in the past two decades, with about half of suicides among people who were not known to suffer from mental illness.

And the study also noted:

The researchers observed similar results for drugs that listed suicide as a potential side effect. These findings persisted when the researchers excluded anyone using psychotropic medications, considered an indicator of underlying depression unrelated to medication use.

READ: Ten dangers all women should know about hormonal contraception

A disturbing reality of the birth control aspect is its current promotion by Planned Parenthood, which continually argues that women are empowered by birth control. Arguing that birth control is essentially a catch-all solution for everything women may desire to achieve, from a college education to economic gain, the abortion corporation — which has repeatedly insisted access to birth control means it should be “free with no copay” — somehow has neglected to note the troubling realities and risks of hormonal contraceptives. Instead, it lauds the pill, the most common form of hormonal birth control. In fact, in Planned Parenthood, The Birth Control Pill, A History, only the early birth control pills are discussed as risky, and depression is never mentioned: 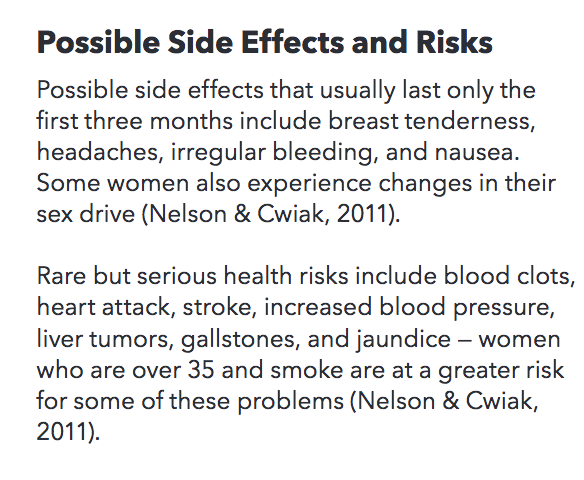 In addition, two Planned Parenthood-supporting OB-GYN professors, Dr. Katharine O’Connell White, assistant professor of obstetrics and gynecology at the School of Medicine and Dr. Aviva Lee-Parritz, MED associate professor of obstetrics and gynecology, both from Boston University School of Medicine, write in a column, published June 11, in BU Today, “The health of our society—not only of women, but of their families—is dependent on access to both contraception and safe abortion.”

But University of Illinois researchers would differ from both Planned Parenthood and these physicians, especially in the cases of women taking medications in addition to hormonal contraceptives. (And those medications don’t even have to be prescription medications to contribute to depression.) This FDA Physician’s Package Insert for ORTHO TRI-CYCLEN, a very common type of birth control pill, lists depression among a host of other adverse reactions reported: 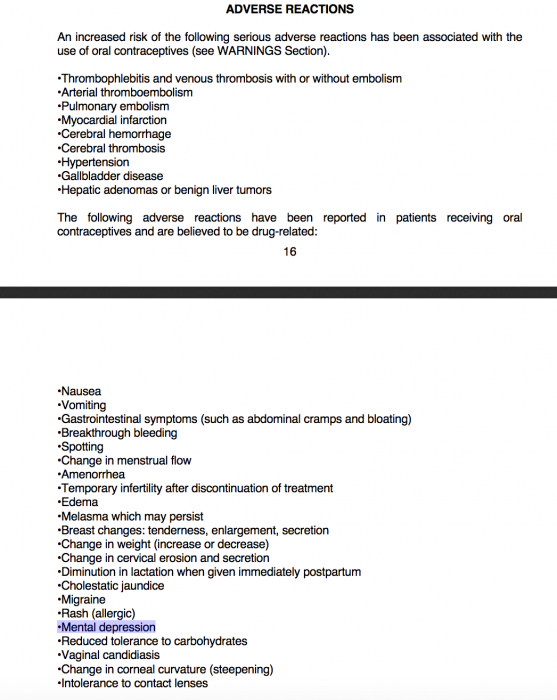 Furthering the risk for depression, which can lead to suicidal ideation, researchers found that polypharmacy, which is the concurrent use of more than one medication, increased the risk of depression significantly. And what’s most troubling about all of this is that often patients never get a warning, even if they do read the product packaging. The Daily Mail reports:

For other common medications — like blood pressure lowering pills, antacids known as proton pump inhibitors, painkillers and hormonal contraceptives — the warnings are harder to find or simply don’t exist in the packaging.

“Product labeling for over-the-counter medications does not include comprehensive information on adverse effects including depression,” said the report.

“Many patients may therefore not be aware of the greater likelihood of concurrent depression associated with these commonly used medications.”

Researchers found that more than 200 commonly used prescription drugs have depression or suicidal symptoms listed as potential side effects.

Use of prescription drugs with suicidal thoughts listed as a potential adverse effect increased from 17 percent in 2005 to 24 percent a decade later, the study said.

But it’s not only the pill that is potentially causing these problems; it’s any hormonal birth control. A separate article about a study in Sweden on birth control and depression in teenagers noted, “The use of prescription drugs for mental problems was greatest among girls who used non-oral contraceptives containing hormones, such as a skin patch, implant, or vaginal ring.”

Meanwhile, these 2018 headlines are not new. In 2016, a landmark Danish study’s results were published, also in JAMA. This study tracked over one million 15-34-year-old women over several years. The conclusion of that study reported:

And an article in Kaiser Health News, reported about the 2016 Danish study:

This study is the latest addition to growing body of literature suggesting women’s contraceptive use may have an association with mood disorders. One small 2012 study connected oral combination contraceptives with changes in emotional brain reactivity among women who had previously experienced adverse side effects to the drug. Another article, published in 2003,  found changes in estrogen levels could cause bouts of depression among at-risk women. And two separate studies found adverse mood swings among women taking progesterone as part of hormone therapy.

It’s clear that a body of literature clearly suggests that, at best, there is a reasonable chance that using hormonal contraception could lead to depression. Certainly it isn’t a guaranteed side effect, but for some women, the risks don’t outweigh the benefits, especially when repeated studies continue to report similar results.