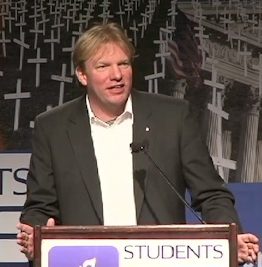 Hollywood filmmaker Jason Jones, famed for movies like Bella, and his most recent film, Crescendo, recently shared the story of how he became pro-life. His story appears in the forward to Kristan Hawkins’ book Courageous: Students Abolishing Abortion in This Lifetime. In telling his story, Jason relays the transforming experience of losing a child to abortion when he was very young, to dedicating his life to the cause — which eventually led him to Hollywood as a filmmaker with a message. Jason explains in his story that the pro-life convictions he now holds began when he was a teenager. He describes the circumstances leading up to his loss:

It was two days before my seventeenth birthday, a Saturday morning, the day after a football game in which I’d played. So I was tired and sore, but I could smell breakfast coming from downstairs and somebody was walking up the stairs. I was half asleep. The door opened: it was my girlfriend, I smiled, of course—but from the look on her face I could see that this wasn’t called for. This was a serious moment. I steeled myself. After a few long seconds, she looked up at me and said, “I’m pregnant.” 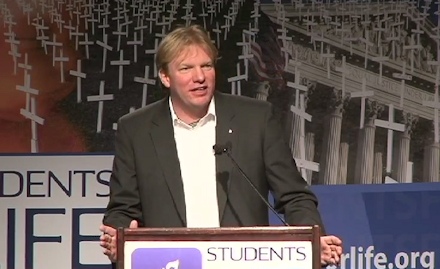 Although Jason was only sixteen years old at the time, he felt the sense of responsibility entailed by becoming a father, and decided to join the army to support his new family. He left high school, enlisted, and was off to basic training. The thought of his new child its mother kept him going through the most difficult parts of training. When he was almost finished with basic, and was preparing to return home, he received a phone call:

I’ll never forget the day—it was a Sunday when I was cleaning pots and pans while everybody else was busy praying. A friend came running in and said, “Jones, your girlfriend’s on the phone and she’s crying.” So I ran out, knowing that I wasn’t supposed to leave my station or answer the phone. But I picked it up, and she was crying, as I have never heard a woman cry before. Ever. The only way that I can explain it is that her soul was crying. And she kept saying over and over and over again, “I’m sorry, I’m sorry, I’m sorry. It wasn’t me.” And then her father said, “Jason,” over the other line, “I know your secret, and your secret’s gone. She had an abortion.”

Jason was devastated. He had left high school and joined the military to support his little family, and suddenly his whole future had vanished. He didn’t even know abortion was legal — and he says that was the hardest detail to digest in the midst of his anguish:

At the sight of me falling apart like this, my captain—a big army ranger—looked pretty broken up himself. I managed to form some sentences: “Sir, call the police, my girlfriend’s father killed my child.” And he asked me to explain what happened. And as I did he looked confused and he said, “Private. Why would I call the police? Don’t you know that abortion is legal?” And you know, I didn’t.

Although I was just an E1 private making three hundred dollars a month I did know one thing—that human life began at fertilization. That information was not above my pay grade. And I knew that my child was a human being… What really knocked the wind out of me, what was really incomprehensible, was that what had happened to my baby was perfectly legal. That wouldn’t sink into my head. It was too insane.

Convicted that what had happened to his daughter — and to himself as a father — was an outrage, Jason promised his girlfriend then and there that he would spend his life working to end legalized abortion. At the end of a phone call with the mourning young woman, he vowed:

“I promise you, that even if no one else cares about abortion, and if it takes me the rest of my life, I will end abortion for our daughter Jessica” (we knew that our child was a girl because the abortionist said to my girlfriend afterward, “By the way, your baby was a little girl”).

Wasting no time, Jason began knocking on doors in the Hawaiian community where he was first assigned with the military. He asked whomever would answer what they believed about abortion, and whether they knew it was legal. Although he was met with mixed reactions to his queries — including doors being slammed in his face — Jason says that the majority of the community agreed with him that legal abortion was an outrage.

Jason went on to attend college in Hawaii, where he founded the pro-life group. He dedicated his time to the difficult task of reaching out to students about abortion. He said,

Now that I’m making movies in Hollywood, people come up to me and congratulate me for my courage. Do you know what I tell them? “Compared to a college campus, being pro-life in Hollywood is easy. You know who is courageous? Those pro-life student activists. They are the ones on the front lines.”

Jason believes that the vitality of the pro-life movement lies in the hands of the young generation. He points out in his testimony that the odds are daunting, just as they were for opponents of Nazism. But in the end, that ideology crumbled under the weight of dedicated persons who persisted in their dedication to the truth. “[I]f we make it our life’s work to share the dignity, beauty, and incomparable worth of the human person,” Jones says, we will see the continued cultural transformation away from the culture of death and towards life.

Jason Jones’ full story can be found reprinted here, and in the book, Courageous.