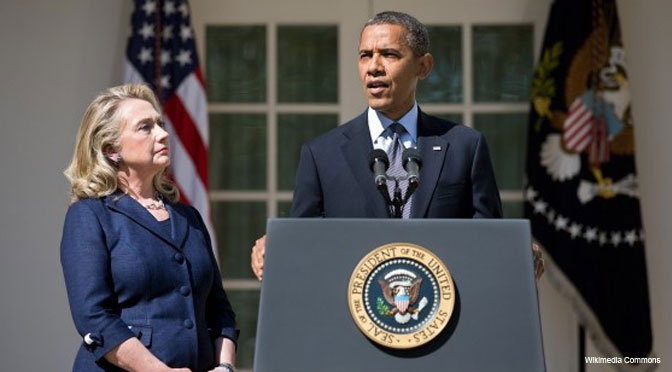 Judicial nominees are one of the most critical ways the next president will influence the future of abortion in America, which is why Hillary Clinton’s latest comments on the campaign trail are so terrifying…

At a campaign event Tuesday in Decorah, Iowa, Clinton was asked whether she would consider nominating Obama to the bench.

“Wow, what a great idea. Nobody has ever suggested that to me,” she said. “He may have a few other things to do.”

While this was just a complimentary answer to a question and not something Clinton gave much thought, and it’s questionable if Obama would even want to spend his post-White House years on the Supreme Court, it would be neither unprecedented nor inconceivable—President William Howard Taft was named Chief Justice after his presidency, and Obama used to teach constitutional law at the University of Chicago. So the very possibility of Justice Obama should be enough to send shivers down any pro-life or Constitution-loving spine.

No matter how many legal minds on his own side of the abortion debate admit Roe v. Wade was wrongly decided, Obama has made it abundantly clear that he doesn’t care about the legal merits as long as he gets the policy outcome he wants. His most recent statement on Roe v. Wade reaffirms that he considers abortion a “constitutional right” that needs to be actively protected. Even when not speaking specifically about abortion, his conception of the judicial role is absolutely unfit for the job:

If we can find people who have life experience and they understand what it means to be on the outside, what it means to have the system not work for them, that’s the kind of person I want on the Supreme Court.

He’s essentially saying he wants Justices to begin cases with biases for and against certain types of parties, which is the exact opposite of the dispassionate impartiality that any decent jurist would strive for. Yes, sometimes “the system not working for outsiders” is a problem, and sometimes government action is warranted to correct it, but only sometimes is it a problem because a policy violates the Constitution. Often a bad policy can be perfectly constitutional, leaving it the legislature’s or executive’s responsibility to fix.

Between his stated criteria for good judges and his long record of ignoring laws he doesn’t like, it’s clear that Justice Obama wouldn’t care which cases are which.

Indeed, he’s made it abundantly clear that when forced to choose between the Constitution and abortion, he’ll pick abortion every time. Upholding Roe v. Wade was so important to him as an Illinois state senator that he preferred to let abortionists starve newborns to death rather than accept a theoretical risk to Roe so remote that even NARAL agreed to born-alive infant protection. He has so little respect for the states’ constitutional prerogative to decide abortion policy for themselves that he campaigned on the promise to invalidate virtually every state and local pro-life law in the country by signing the Freedom of Choice Act. To this day, he continues his obsessive quest to force religious groups to subsidize abortifacient birth control, long after the Supreme Court told him to knock it off (fun fact: SCOTUS has unanimously ruled against Obama over a dozen times).

Finally, let’s revisit Obama’s teaching days for a shocking look at his legal thoughts on the sanctity of life that I’m sure will be news to some of you. In 2012, Ben Shapiro reviewed some of the lessons the future president gave his students, including one on the matter of cloning:

Obama suggests that there is a fundamental constitutional right to clone oneself. The precedent cases “all argue for a broad reading of the right at stake: a right to make decisions regarding childbearing free from government interference–at least absent a government showing that such interference is narrowly tailored to serve a compelling government interest” […]

No “compelling interest” in stopping the devaluation of human life by turning it into something we can mass produce… in a country founded on the principle that life is an unalienable endowment from God.

That, ladies and gentlemen, is the bankruptcy of the abortion crowd’s entire judicial philosophy in a nutshell.