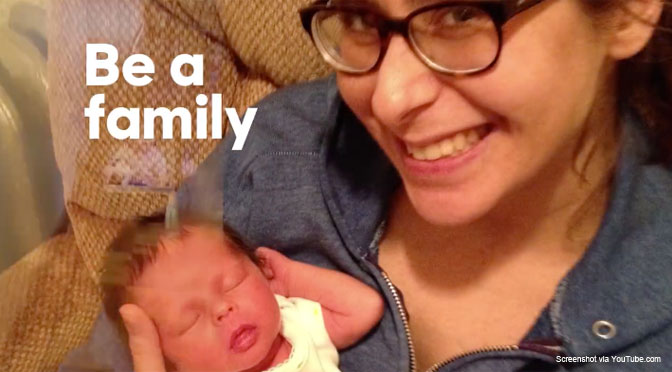 If one were to watch the beginning of Hillary Clinton’s “I Believe” ad without knowing which campaign it was a part of, one might think it was an inspirational pro-life video. The opening features a father addressing his preborn child: “Hi, little one. It’s me. It’s your dad. You are not born yet… I can’t wait to meet you.” Other parents are then shown addressing their children in similar, heartfelt ways.

The ad is supposed to be about the future, as Hillary’s Facebook page informs us:

I BelieveAs parents, grandparents, aunts, uncles, or siblings, we aren’t just thinking about our own futures—we’re thinking about the kind of future we want the next generations to come into.

But then the video takes a strange turn, with the woman in the voice-over stating, “I believe in an America where you will be able to make decisions about your body because it belongs to you.” Amongst the images of happy, smiling babies comes a typical pro-abortion talking point – and as is typical of such talking points, abortion isn’t mentioned, but implied.

Luis Zaffirini discusses the ad at LifeNews.com, noting that “between that imagery and the opening line being addressed to an unborn child, the cognitive dissonance is nearly unbearable.” Indeed.

That the ad comes from Hillary Clinton could hardly be more ironic. After all, Planned Parenthood, the nation’s single largest abortion provider, broke precedent to endorse her for president during the primary season. And she has compiled quite the pro-abortion record during her time as a public figure.

Republican presidential candidate Marco Rubio remarked that Clinton “believes all abortion should be legal, even on the due date of that unborn child.” And indeed, just this campaign cycle, Clinton has advocated for late-term abortion during press interviews. So why would a candidate so extreme in support of abortion use babies in a campaign ad?

Such an ad would normally be a beautiful affirmation of life. But this one can instead serve as a warning to pro-lifers as to what’s really at stake in this election. As Zaffirini says in his piece:

If I were addressing the next generation of Americans, I would tell them to be scared because they might have no future at all if they happen not yet to be born.