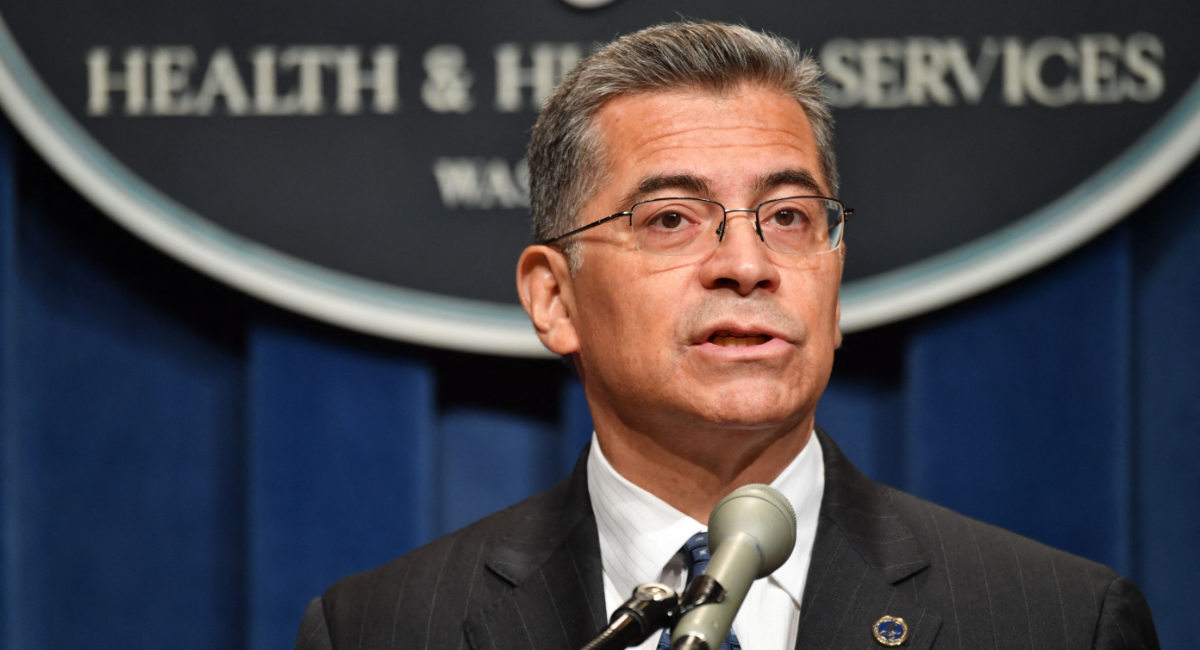 Secretary of Health and Human Services (HHS) Xavier Becerra has proclaimed that “all options are on the table” for the Biden Administration to protect abortion, including using federal funds for abortion travel, placing abortion facilities on federal land, and further expanding the use of chemical abortion (the abortion pill). The statement comes on the heels of the U.S. Supreme Court’s June 24 decision in the Dobbs v. Jackson Women’s Health Organization case which overturned Roe v. Wade and Planned Parenthood v. Casey, which he called a “moment of crisis in healthcare.”

“This is a critical moment in history. How we respond will speak to how we view the rights, dignity and wellbeing of women everywhere. This is a moment of crisis in health care. We will leave no stone unturned. All options are on the table. We will do everything within the legal limit of the law to reach patients and support providers,” Becerra stated in a June 28 speech also published at the HHS website where he mentioned that he was at a Planned Parenthood abortion facility and later traveled to a separate abortion facility when the Supreme Court decision was released.

In a June 25 release, HHS shared an “abortion finder” website, which claims to be an “easy-to-use search tool built on a database of over 750 verified abortion providers across the country” that partners with the National Abortion Federation (NAF), Planned Parenthood Federation of America (PPFA), and Advancing New Standards in Reproductive Health (ANSIRH). The website directs people to abortion facilities from PPFA, NAF, and the Abortion Care Network (ACN) and claims to be “operated by Bedsider,” a project of Power to Decide, which boasts partners and funders that include HHS, the Ford Foundation, Google, Hewlett Foundation, JPB Foundation, Lalor Foundation, Marriott Foundation, Merck, PlanB One-Step, and Tara Health Foundation (THF) among others.

For minor girls, AbortionFinder.org directs them to a separate website, according to Townhall’s Madeline Leesman. There, the young abortion clients are shown how to obtain a judicial bypass to get an abortion “if you need to avoid involving a parent or guardian,” Leesman also wrote. “The website, Repro Legal Helpline, contains resources for minors to obtain an abortion without the involvement of a parent. It claims there are 37 states that require by law to involve a parent in the decision to get an abortion.”

On June 28, Becerra tweeted that at president’s direction, HHS would begin taking action by laying out a multi-point plan to protect abortion. Becerra asked followers to “share reproductiverights.gov so that everyone knows their rights.” 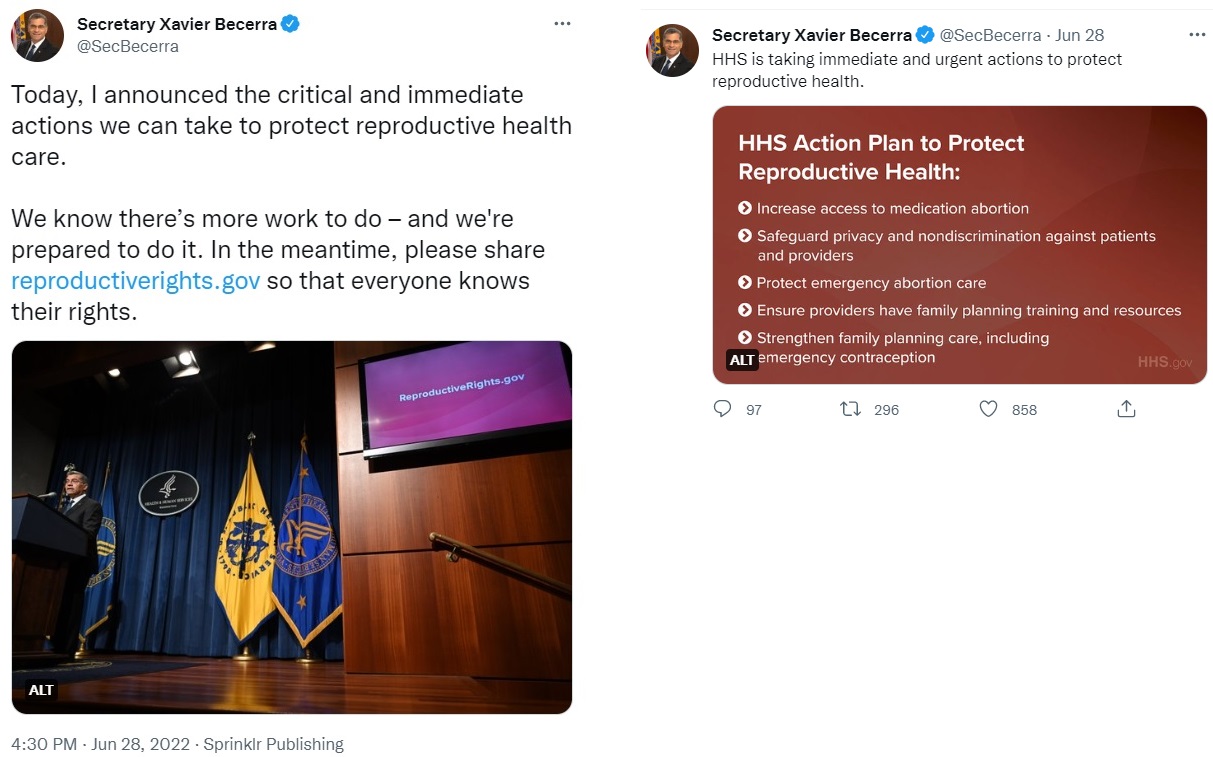 The government-funded, newly created “Reproductive Rights” website states, “If you need help paying for an abortion, abortion funds may be able to provide financial assistance. Information about abortion funds and resources to help are available at AbortionFinder.org.” 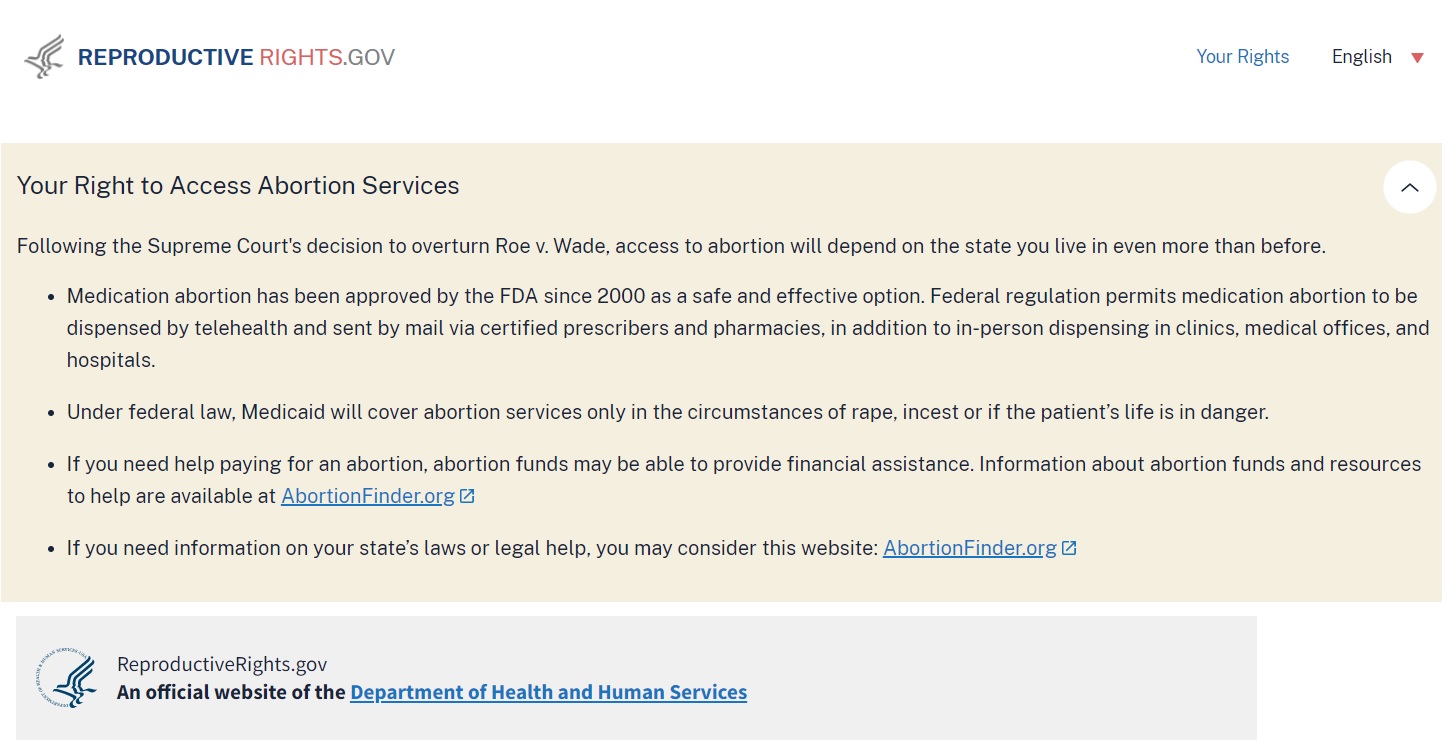 Recent studies have shown that as many as six percent of abortion pill clients have reported to hospitals for emergency room care after taking the drugs.

Without citing any evidence, Becerra claimed, “The Supreme Court’s decision will result in worsened health outcomes and death for some patients,” claiming that “[w]orking to increase access to this drug is a national imperative and in the public interest.”

Killing defenseless and innocent undelivered human beings, however, is not health care. The homicide of humans is not in the public interest.

Becerra then vows HHS’ “support” of the FDA’s alleged “rigorous scientific review for these safe and effective drugs” but fails to say that many alleged “reviews” are often authored by those on the payroll of the abortion pill’s manufacturer, Danco. At least one study author, Dr. Daniel Grossman, has suggested that ER doctors should lie and hide abortion pill complications.

“We will also work with the Attorney General and the Justice Department as they work to ensure that states may not ban medication abortion, based on a disagreement with the FDA’s expert judgment about the drug’s safety and efficacy,” Becerra added. “And we will issue guidance to providers to ensure they receive accurate and robust information on medication abortion.”

This will no doubt include false information about the effectiveness of abortion pill reversal (APR) — progesterone to counter the effects of the mifepristone — which offer women a choice to potentially save their baby after taking the first pill in the two-drug regimen.

“We will make sure we both investigate and enforce the law… We don’t want anyone’s private health information, for example, to be leaked in ways that violate federal law,” Becerra stated in Q&A later.

It’s a little late for that, as Planned Parenthood and multiple other abortion facilities have already been exposed for failing to protect patient privacy.

Becerra said he is directing the “Department to examine its authority under the Emergency Medical Treatment Act (EMTALA) to ensure that clinical judgment of doctors and hospitals is supported in treating pregnant patients, including those experiencing pregnancy loss or complications, and reaffirming that abortion care can be appropriate to stabilize patients”

His abortion protection plan will also direct government agencies “to work to ensure that all providers — from doctors to pharmacists — to clinics have appropriate training and resources to handle family planning needs, including administering patient referrals for care, and helping patients navigate this new reality.”

In addition, HHS is directing “the Centers for Medicare and Medicaid Services (CMS) to take every legally available step to protect family planning care, including emergency contraceptives and long acting reversable contraceptives, such as IUDs.  Health care is a matter to be decided by patients and their providers.  As part of these efforts, we will make clear that family planning providers are able to participate in the Medicaid program. These clinics provide safe care and have a vast expertise in providing reproductive health care.”

On the table: Abortion facilities on federal land and taxpayer-funded abortion travel vouchers

Washington Post reported that “In recent days, some Democrats have pushed the notion of declaring a public health emergency and setting up abortion clinics on federal lands in areas where the procedure is banned.” Becerra was asked about that plan and in response he stated, “What I can tell you is that we are aware of a number of ideas and proposals, many of which we have been considering internally ourselves. We have made no decisions yet, but we certainly would have conversation with the President to make sure we implement his directives to us in trying to protect women’s reproductive healthcare services,” he said. “But, as I said, every option is on the table we will take a look at everything we can. And everything we do will be in compliance with the law.”

KFOR.com reported that HHS is considering using taxpayer dollars “for travel vouchers for patients to access abortions, and is aware of the idea of building abortion clinics on federal land in conservative states.” However, the secretary reportedly noted any federal action could take time because the issue is legally complex. Vice President Kamala Harris previously floated this idea in an interview with CNN.

“We will make sure that if a state is utilizing federal funds, under federal programs, health care programs, that they respect the laws,” Becerra said during the press conference. “Once we tell you exactly what we believe we are able to do, have the money to do we will let you know. Until then all I can say is that every option in on the table.”