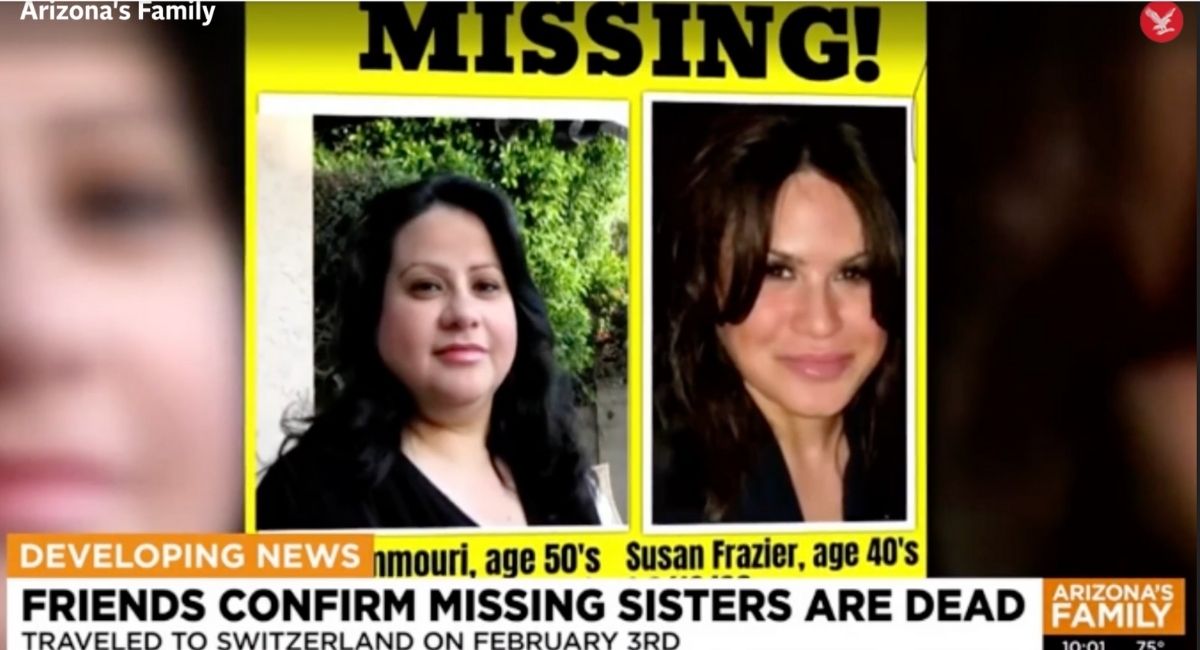 A pair of sisters from Arizona went missing, only for friends and family to later learn the women had both undergone assisted suicide in Switzerland — despite the fact that both were healthy. Now, people are demanding to know why this was allowed to happen.

Cal Ammouri told the Independent that he spoke to his sisters, Lila Ammouri, age 54, and Susan Frazier, age 49, a few weeks before they traveled to Switzerland. He had no idea the purpose of their trip was assisted suicide, and he still doesn’t know the whole story. “Nobody else really knows the specifics,” he said.

Both Frazier and Ammouri worked in health care — Frazier as a registered nurse and Ammouri as a palliative care doctor — and the first red flags were raised when neither came to work at Aetna Health Insurance on February 15. Co-workers originally feared they had been kidnapped and were being held hostage.

However, shortly before the sisters took their lives, strange text messages had caused friends to be concerned. Dr. David Biglari, a long-time friend of the sisters, said the last message was sent the day before they died. Friends now believe the messages were sent by someone else. “Some of the text communications they had, we are certain they were not from them,” Biglari told Fox10 before news of their deaths came. “They were most likely fabricated with someone else.”

A representative from the Swiss government told the Daily Mail that the sisters died together, and verified the date it happened. “The two American ladies died on February 11,” the statement said. “It has been reported that they died later than this but this is not correct. It was the Friday in the Canton Basel-Landschaft by a legal assisted suicide. They died the same day and the timings were close, if not at the same time.” The United States consulate later confirmed this information.

Ammouri didn’t know his sisters had died through assisted suicide until he was contacted by the Independent. “This is the most terrible thing that’s ever happened to me,” he said. “I’m an only child now. I don’t understand any of it. … They were really special. They never hurt anybody. They were always helping everybody. They would go out of their way to help people, which is rare. Unfortunately it’s a tragedy, frankly.”

Switzerland has some of the least restrictive assisted suicide laws in the world; it is not required that a person be sick or suffering. In 2020, assisted suicide was approved for prisoners, and the assisted suicide business where the sisters died, Pegasos, was founded by Philip Nitschke, who is commonly known as “Dr. Death.” Pegasos allows foreigners to participate in what has been called “death tourism,” where they pay large amounts of money to take their own lives. He publicly boasts of allowing those who are merely “tired of life” to be killed. In one tweet, he said:

The Swiss have not medicalised their end of life laws. Those tired of life can be helped, and couples can die together. Pegasos makes this possible. This pisses off the Dutch, where you MUST be sick, from NL, and a doctor makes the decisions, not you.

According to the Daily Mail, anyone who uses Pegasos must have a third party who knows the person who is planning to die and is available to identify them to authorities after they die. It is unknown who the third party person was if the sisters did indeed use Pegasos, however, Pegasos does suggest that those who do not have a third party join Exit International, another assisted suicide business that deals only with patients who are terminally ill, which the sisters were not.

Nitschke also pioneered the creation of a suicide machine called Sarco, which can be created with a 3D printer and comes with its own “coffin.” Late last year, it was suggested that Pegasos is the organization in which Nitschke plans to use Sarco.