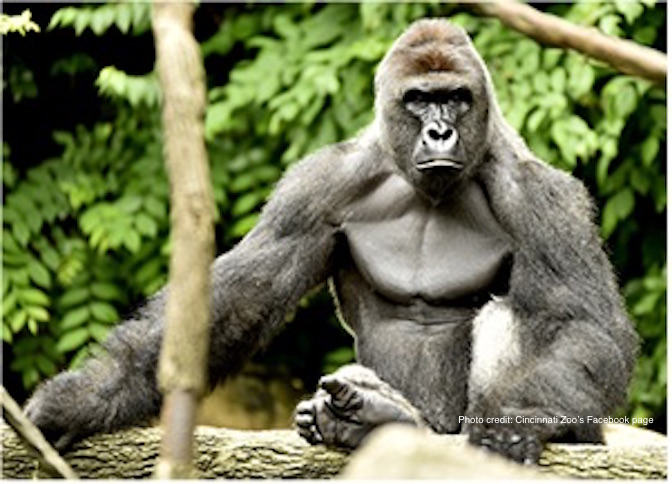 Over Memorial Day weekend, the internet has been exploding with comments, articles, and rants related to the death of Harambe, the 17-year-old silverback gorilla at the Cincinnati Zoo.

While the entire situation was harrowing, terrifying, and tragic, what many of these vocalized opinions reveal about our culture is infinitely troubling.

There’s not a legitimate debate over whether the little boy who crawled and fell into Harambe’s habitat would have died if the gorilla hadn’t been shot. CNN reported:

Officials made the decision to shoot Harambe because the boy was in “imminent danger.” They feared a tranquilizer would take too long to kick in, and the dart may have agitated the gorilla.

“There was nobody getting that baby back from that gorilla — no one was taking him,” Hollifield [an eyewitness] said.

Jack Hanna, world-renowned zookeeper and director emeritus of the Columbus Zoo and Aquarium stated that he “agrees ‘1,000 percent'” with the zoo’s actions.

“They made the correct decision. Matter of fact, it’s a millisecond decision,” Hanna told “CBS This Morning” Monday. “All of us are sorry. We’re all, in the zoo world, heartfelt for this whole thing but thank goodness a human being is alive today because of the decision that the zoo made.”

And, very simply, that’s exactly what this entire situation came down to: to save a human life or not to save a human life. Notably, if the zoo had chosen to not shoot Harambe, and he had killed the boy, he would have had to be euthanized anyway. This wasn’t going to end well for the gorilla, period.

But far more than an unfortunate incident or a tragic event that could have been even more tragic, Harambe’s death has revealed a number of troubling things about the way too many in our culture think:

1. Animal life is revered while human life is discarded. @ReportUK Yeah, Those parents should be sent to the electric chair IMHO, and a gorilla put in charge of the power lever. #Justice4Harambe

But we don’t care about the child, do we? Not really.

125,000 human beings are murdered EVERY DAY through abortion, with a negligible number of people speaking on their behalf, but a gorilla is killed to protect the life of a child, and 236,000 people rush to his defense. All I can do is sit here and shake my head.

21% of all US pregnancies end in abortion. One gorilla is killed to protect a child and we want to crucify the parents instead of being grateful that the boy is not dead or terribly injured.

The problem with revering lost animal life over lost human life was further exacerbated by the fact that the internet was raging over Memorial Day weekend – a time to mourn and remember the human soldiers who have lost their lives fighting for our freedom.

2. A child should die for the mistakes of the parent.

Taken at face value, this statement is incredibly troubling. Since when have we as a society believed it is right to execute one person for the mistakes, neglect, errors, or crimes of another? Just because (if) the boy’s mother was neglectful or downright careless in her parenting, should her son have been left to die a violent, drawn-out death? Apparently, a good number think so.

I'm far from being a tree-hugger, but lowland gorillas are endangered and stupid people aren't.

Most disturbing part: I suspect many more emotional about killing of #Harambe than would have been if child killed. https://t.co/0h2hqUoRL3

And yet, this thinking is hardly different from the thinking that leads us to believe a child should be aborted if her father is a rapist. Or that a child should suffer through a violent, drawn-out death because her parents committed the “human error” of forgetting the condom.

3. “There’s a very real sentiment of disdain for people with children.”

The mother of the boy who went into Harambe’s enclosure has been berated over and over online, particularly by those who weren’t there and didn’t see exactly what happened. Bunny Laditan, author of The Honest Toddler, wrote an insightful Facebook post about the near hatred for parents who make a mistake or who allow their children to misbehave in any way. (You can read it in full here.)

Has anyone else noticed that the need to criticize parents has reached fever pitch? At this point it’s almost pure hatred. It feels like there’s a very real sentiment of disdain for people with children. I don’t know where it came from, but I feel it growing and picking up speed every day.

Parents are expected to be faultless, perfect, to make sure their children are seen and not heard, not be too protective (helicopter parents, smothering mothers), but at the same time, not let their children run wild and disturb the important, adults-only precious environment. Anyone whose children step out of line from being just objects to be admired or a source of entertainment, to…children, are immediately castigated. …I think it says a lot about society that the group of people most loathed are the ones caring for the most vulnerable.

4. Our sense of justice is acutely misdirected.

There are already at least 80 petitions circulating for Harambe, and some people are making “Justice for Harambe” t-shirts, and tweeting about #JusticeforHarambe. And while we can mourn for an animal, seeking justice for a gorilla is not on par with seeking peaceful justice for humans – something few of us actively do.

Where are the t-shirts – made by these same people – for this human twin and for this baby boy (or this one)? Just after aborting him, the abortionist exclaimed, “It’s a baby!” and yet, most of us go on with our daily lives without expressing outrage over abortion and without sharing the truth of its tragedy with our friends.