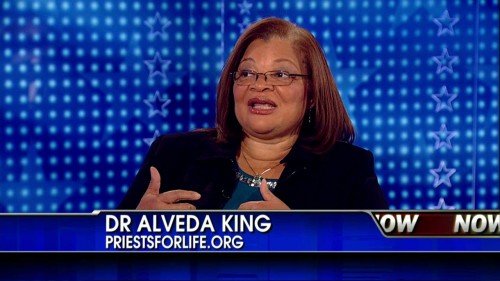 How to remember the 55 million babies killed? 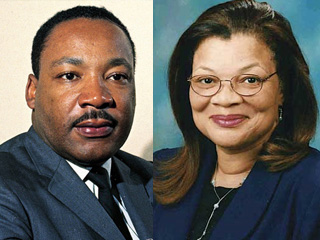 January 22 isn’t only the anniversary of Roe v Wade, the landmark court decision which made abortion legal; it’s also the birthday of right-to-life activist Dr. Alveda King. King is the niece of celebrated civil rights activist Dr. Martin Luther King, Jr. and the daughter of slain civil rights activist Rev. A.D. King. As a child, King’s life was in danger; her family’s home and her father’s church office were bombed. Still, the family continued to fight for civil rights. Today, King maintains the family legacy of fighting for the rights of others – more specifically, the right of the unborn to be born. And each year, King celebrates her own birthday by working to ensure that no child is denied her own birth and birthdays to commemorate.

This year, King is asking for a gift from each and every one of us. It’s a simple gift. All King wants is a donation of any amount in her honor to Priests for Life, at which she is currently a pastoral associate and the director of African-American outreach for Priests for Life and Gospel of Life Ministries. On June 23, 2010, King spoke to the members of parliament in London during an all-party parliamentary group on Human Dignity. She reflected on her childhood:

We were spat upon. We were told to go to the back of the bus. We were deemed unworthy to eat or drink with others. We were clubbed and beaten. And we were lynched. We were killed because we were regarded as less than fully human. So it is with the lives of unborn babies – who are womb-lynched – today.

If there’s anything we can do to remember the lives of the 55 million babies killed through abortion over the last 40 years, it’s to support the people who have dedicated their lives to undoing the injustice of Roe v. Wade. So this week, in honor of those precious lost lives, answer King’s call. Donate to Priests for Life for King’s birthday. Or donate to Live Action or Students for Life or your local crisis pregnancy center like Birthright. Even if you don’t have money to give, you can donate baby items to crisis pregnancy centers to help those mothers who do choose life to better care for their children.

It’s been 40 years since abortion became legal. Don’t just fret about it or yell about it; do something. Donating is a great place to start.